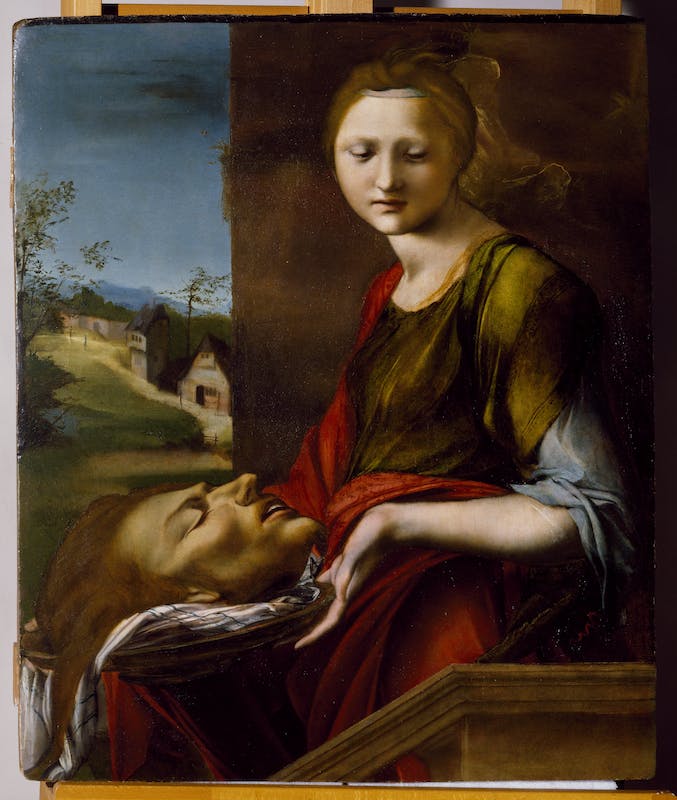 John the Baptist’s beheading was a very popular subject in the Middle Ages and beyond, gaining traction in early sixteenth-century Italian art, and in northern regions in particular. Compared to other narrative variations, such as that of Bernardino Luini, whose depiction can also be found in the Uffizi collection (click the artwork), attention here is paid entirely to Salome – who sits isolated against a dark background – and the head of John the Baptist on a platter. Emphasis is placed on Salome’s uncertain grip and her downward, repulsed gaze, showing Herodias’ daughter to be somewhat ‘demure,’ despite her request – as told in the Gospels of Mark (Mark 6:14-29) and Matthew (Matthew 14:1-12) – to have John the Baptist’s head delivered to her on a platter. The sensitivity alluded to in this painting is entirely foreign to that of her wicked mother, and seems to find extension in the typically Nordic background, and its juxtaposition with the direction of the balustrade-handrail and platter. The mighty head of John the Baptist, which has strong physiognomic features and is rather large in size, might instead allude to the role of John as told by both Mark and Matthew at the beginning of the story of his martyrdom, whereby Herod affirms that he is the Baptist ‘risen from the dead’ in the face of Jesus’ growing fame and miracle powers (Matthew 14:1-3). The painting is mentioned several times in the Medici inventories, which document movements between collections and changing attributions. Registered at the Casino di San Marco in the legacy of Carlo de’ Medici with the title Herodias and first attributed to Giovan Francesco Penni (1666), it was later sent to the Uffizi (1667) and attributed to Pontormo (1704 ). Transferred to Pitti in the second half of the eighteenth century (1761), it returned to the Uffizi, where it was attributed to Federico Barocci (1795). This muddle of attributions was later resolved by Roberto Longhi, who put forward the name of the Spanish painter Alonso Berruguete in the 1950s, dating its execution to around 1514, during a crucial era in Florence, which started in 1508, but anticipated and deviated (in 1510) from the Roman experience. The devices used by Berruguete in this painting were in fact influenced by the masters he admired at the time, whose works he was able to view in the flesh. His techniques were most strongly influenced by Raphael’s The Parnassus, exhibited in the Vatican Rooms, and Michelangelo’s works in the Sistine Chapel, which Berruguete reinterpreted with originality and ‘a freedom of influence,’ which Longhi attributes to artists at the time who had no qualms about drawing on the repertoire of Italian art, particularly those working in Spain.