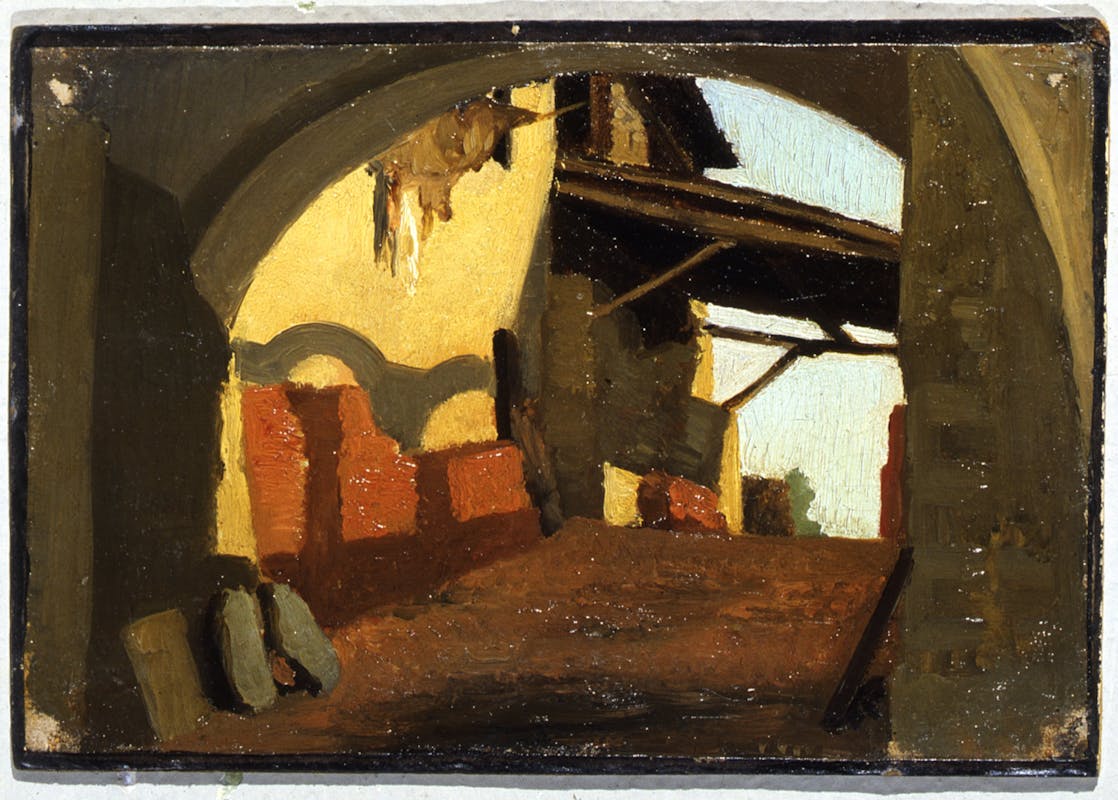 Patches of bright colour, clear contrasts between light and shadow, synthesis of form. Vito d’Ancona launched into his Macchiaiolo phase with this painting of a Portico. It marked a clean break from his first form of expression, which had still been intricately linked to the academic studies he had begun under the guidance of Giuseppe Bezzuoli (1784-1855). Vito had moved from Pesaro to Pisa with his family, then settling in Florence in 1848. There, from the very beginning, he had been a regular at Caffè Michelangelo, the favourite haunting ground of the Macchiaioli, and he also shared their patriotic ideals, enlisting to service in the First Italian War of Independence in 1848. However, it was not until 1861 that he produced such an intensely Macchiaiolo work as this one.

D’Ancona’s talent as a painter had been acknowledged since the beginning of his career and he had won many awards. From the early 1950s onwards, he participated in many Italian Promotrice expositions, mainly with paintings related to historical romanticism. Held in high regard by his colleagues, especially young Telemaco Signorini (1835-1901), D’Ancona was seen as a point of reference due to his vast culture (which he continuously updated) and, from a technical perspective, for his clever use of light.

Indeed, in this work, he used light to create the colour contrasts present. A warm, vibrant, unfiltered, light. The subject is poor, but the author succeeds in dignifying it with disarming simplicity. A true manifesto, his explicit vow of faith to the Macchaiolo style. His close relationships with artists like Giuseppe Abbati (1836-1868), who painted charming indoor scenes, led him to favour similar subjects. On the other hand, his use of colour, applied with wide, dense, brush strokes, is a tribute to the Venetian painting that Vito had studied during a trip he made with Signorini in 1856.

This stylistic metamorphosis of D’Ancona would appear in the works of the early 1960s: not only those with a more intensely Macchiaolo style, but also those of the historical genre.

And his subsequent artistic phase would prove to differ even more, as it was closely related to his move to Paris, where, between 1865 and 1874 he had the possibility of learning the new ideas and techniques of the Impressionists. His perspective became photographic, his painting style fresh and unfettered. Having returned to Florence, following some serious health problems, in 1877 he participated in the Exposition of Naples, winning an award with a Nude stylistically compared to his early artistic career.