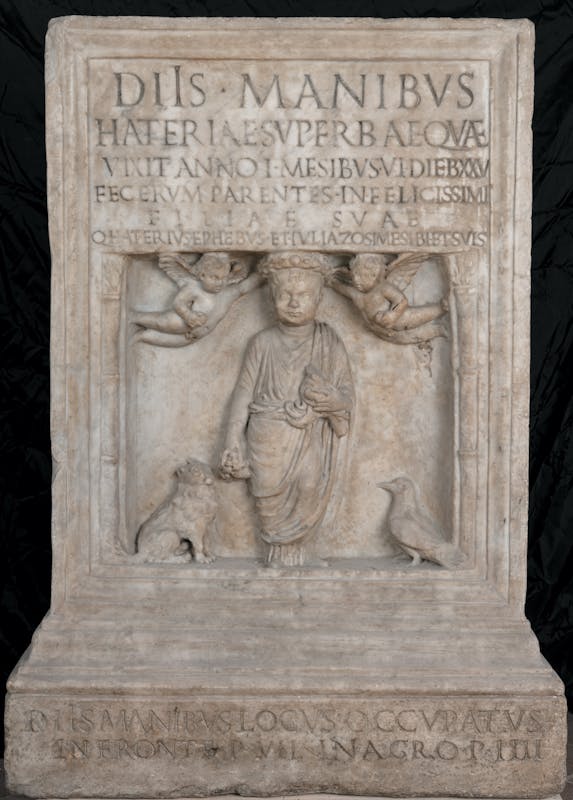 The altar shows a clear bipartition of the frontal mirror. The upper part contains the commemorative epigraph, from which we learn that Hateria Superba was about one and a half years old when she died and that she was the daughter of freedmen (CIL VI 19159). This can be gathered from the cognomina of Greek origin (Ephebus and Zosime) and from the lack of a patronymic in the parents' names, typically the sign of a freeman. The section underneath, which occupies about two thirds of the space, hosts a niche surrounded by two lit torches with the depiction of the deceased child in the center, dressed in a tunic and a toga. Her portrait is idealized and, as was customary for representations of children, differs from her real appearance, considering that she would have been younger at the time of her death. Finally, a second inscription on the plinth of the altar specifies the dimensions of the burial area destined for Hateria, her parents and their descendants, probably the couple's other children.

The girl is depicted as caught halfway between life and death, as first suggested by Mansuelli. The small dog and bird beside her, together with the dove in her hand, represent her playmates in on earth, whereas the two erotes encircling her head with a crown of leaves allude to the afterlife, as does the bunch of grapes in her right hand, probably a reference to Dionysian symbolism. A further allusion to the special protection afforded to children in the afterworld is the pendant with two pearls adorning her forehead, related to the Isiac cult. Another point of interest in the portrait is Hateria's attire. She is wearing a tunic and toga, which is reminiscent of some of the maidens depicted in the north frieze of the Ara Pacis, the monumental altar built by Augustus. This is further proof that the representation of women of all classes and ages was inspired by the models offered by the domus Augusta.

The sculpture was already in Rome in the middle of the 16th century, in the villa outside Porta Flaminia that belonged to Pope Julius III. It was then transferred to the Villa Medici on the Pincio Hill, from where it was moved to Florence, probably in the 1880s.