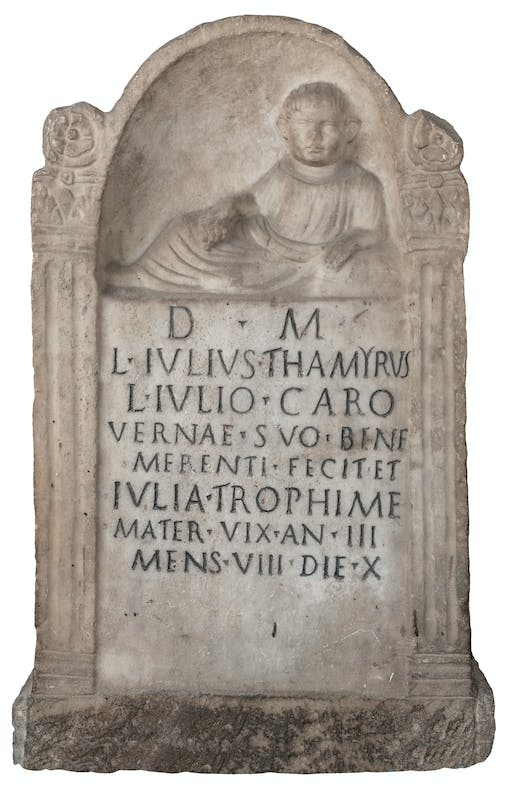 The altar is dominated by the portrait of Lucius Julius Carus, a slave who died very young, at the tender age of three years, eight months and ten days. The portrait, set in a niche in the upper part of the monument, occupies about one third of the main facade. The child, portrayed as older than he was at the time of his death - as is usual with children - is depicted lying down, resting on his left arm, looking towards the spectator and holding a bunch of grapes in his right hand, a Dionysian symbol that alludes to the special protection afforded to children in the afterlife.

The inscription makes it clear that Caro was the verna, that is, a house-born slave, of Lucius Julius Tamiro, the man responsible for the dedication who in turn appears to have also been a freedman, given his cognomen of Greek origin and the lack of a patronymic, typically the sign of a freeman (CIL VI 20304). The attention paid by Tamirus to the young slave, in a dedication in which he also mentions the deceased's mother, Julia Trofime, suggests that Caro was his son, born when his mother was still a slave. And the presentation of the woman is one of the most interesting aspect of the dedication: she is commemorated last, of course, but simply defined as Iulia Trophime / mater, with no reference to her status as subordinate to her master. In fact, she is characterized only by her gentilizio, or family name and cognomen, details that identify her here as a freedwoman, and the term mater, implying that she had achieved one of the aspects of the ideal matron. This model was far removed from her status as a former slave, but the master chooses to use it in his description of her as a tribute to the affection that bound them to young Julius Caro, their beloved son, born a slave.

The first known mention of the altar placed it in Rome, in the vineyard that Cardinal Giovanni de' Medici had used since 1560, outside Porta Flaminia, a property that passed to his brother, Cardinal Ferdinando when he died on 1562. It remained there until its arrival in Florence in 1788.