Piero Aranguren (Prato 1911-Florence 1988) was the architect who brought back the “Museo Firenze com’era (Museum of Florence as it was)”, after a long period of oblivion and directed it for twenty years, from 1955 to 1975. The Uffizi Library has received the donation of his archive, precious documents concerning the transformation of the city during the 19th and 20th centuries. The archive contains a wealth of curious facts and information about bridges, roads, piazzas, theatres, transport, lighting and buildings of different types.

We know that in the period in which Florence was the capital, there was a regular service of 122 horse-drawn omnibuses (fig. 1) around the city streets and surrounding areas and then, on 11 September 1890, the “Florence-Fiesole” electric tram service was inaugurated, with “electric lighting supplied to each carriage” and “an effect that was ... stupendous”[1]. These are just some of the curious pieces of information available from the archive of transcribed articles and cut-outs from newspapers belonging to Piero Aranguren[2], director of the “Museo Firenze com’era”, and recently donated to the Uffizi Library.

The archive groups items according to subject, seeming almost to accompany and integrate the sections into which the museum was organised, under the 20-years direction of Piero Aranguren, from 1955 to 1975. We find, in fact, general divisions, such as  “Streets”[3], “Various Piazzas”[4], “Bridges”[5], “Cinemas and theatres”[6],  “Railway”[7]  and then more detailed, news-related subjects, such as “Sorgane”[8], about the birth of the Florentine district of the same name in the 1960s, “Town Planning”[9], “Telephones and telegraphs”[10] , “Florentine tramways”[11].

When Aranguren was appointed to direct the “Museo Firenze com’era”, the Museum was a heterogeneous complex, where the transformations of the city over the centuries were documented above all through the maps, plans and pictures showing Florence from above, paintings, watercolours, engravings and period photos that illustrated scenes of daily living and customs in the city. The museum was founded in 1909; the idea came from Corrado Ricci, when he was still superintendent at the Florentine Galleries [12], under the name “Museo Storico-Topografico (Historic and Topographical Museum)”. It collected together up to three thousand works, including drawings and paintings, mainly from the Royal Galleries and Collection of Prints and Drawings of the Uffizi[13], but it was not destined to be a great success in the decades to follow.

In 1927, it was in fact transferred to the Museum of San Marco, alongside the “Museo di Firenze Antica”, devised by Guido Carocci in the early 20th century, in contrast with the unscrupulous demolitions resulting from the so-called “redevelopment” of the city centre (fig. 2), in the late 19th century, which changed the appearance of the old centre forever[14].

In the cultural climate of the post-war period, characterised by works to rebuild what had been destroyed during the Second World War, Florence City Council looked with new interest at the old Museo Storico-Topografico and decided to move it to the newly restored premises in the Oblate Complex[15].

In 1955, the Museo Storico-Topografico, to which the more expressive name of “Firenze com’era”, was newly inaugurated in the eight large rooms on the first floor of the Oblate Complex (fig. 3), with about 1500 works[16]. Architect Piero Aranguren - first collaborator and then employee of the City Council[17] - was appointed to direct the museum, as it was probably thought that his was the professional position needed to relaunch the old collection. Aranguren dedicated himself with great enthusiasm and energy, not only to fitting out the new museum and increasing the collection, but also to the information about the history of Florence’s urban development and the many transformations of the city’s daily life, especially in the period in which it was Italy’s capital and after.

He soon became known as “Professor Aranguren”, due to his activity as a conference speaker, which he carried out in different locations throughout the city, from the Università Popolare at the Palazzo di Parte Guelfa, to the Casa Guidi Museum, and the Florence Lyceum, as well as the museum of which he was director[18].

Aranguren was equally attentive to communicating these themes to a public of specialists, participating often - including as speaker - at conferences organised by the Society for the History of the Unification of Italy[19].

The introduction to the documentary exhibition “Florence after Unification”[20], in which he explained the most important transformations to the urban layout of the city from 1865 to 1896, offers an example of the clear, pleasing style with which Aranguren would usually entertain audiences interested in the city’s history. Many of the works on show at that exhibition were listed as being from the so-called “Aranguren Collection”, which does not reflect the documentation in the archive - textual only - donated to the Uffizi Library. Unfortunately, the precious iconographic part of the collection - with its many period photographs, engravings, and watercolours that Aranguren would personally buy from antiquarians and similar - was scattered after his death, mainly sold by his heirs to the Alinari archive and similar buyers[21].

In the 1970s, the city council decided for a drastic downsizing of the“Museo Firenze com’era”, beginning a systematic process of returning the paintings, watercolours, and engravings to their museums of origin. The emergence of a new cultural awareness, which considered it a good idea to reconstruct the integrity of museum collection, went wholly against the climate that had promoted the establishing of the museum in the early 20th century, bringing together works from a host of different collections. To this we can add that it was common use to free up spaces needed by the local administration for other purposes. Thus the “Museo Firenze com’era” was set up on the ground floor of the Oblate Complex, in a smaller edition of no more than 300 pieces[22].

Unfortunately, Piero Aranguren was not involved in this stage and the return of the works, to his great disappointment, was carried out by another officer from the City Council. He later retired from his post and continued to expand his own collection of curiosities and news about the city’s past as a private individual.

Professor Giuseppe De Juliis, Aranguren’s trusted friend and pupil, tried to accomplish his “post mortem” wishes by recently donating what remains of his collection to the Uffizi Library, which already preserves many published and unpublished sources about the image of the city over the centuries.

The “Museo Firenze com’era” continued to exhibit in the Oblate Complex until 2010, the year in which it closed its doors for the last time. In 2012, the current section of the Museum in Palazzo Vecchio, “Tracce di Firenze (Traces of Florence)”, located in two areas on the ground floor, is a pleasant exhibition but truly much reduced, of works from what was once the “Museo Firenze com’era”[23].

More than a century on from the Museo Storico-Topografico, it seems, unfortunately, that there is very little left of the passion and enthusiasm with which Corrado Ricci and Pasquale Nerino Ferri had created their museum of the city; an important legacy that Piero Aranguren was able to take and continue, with the same commitment and dedication, enriching the museum’s collection under his directorship.

[2] The Registry Office of Florence City Council records that Piero Aranguren was born in Prato on 22 January 1911. His family inform us that he died in Florence on 1 January 1988. For Piero Aranguren’s architectural career, please see Bertocci 1998, p. 307.

[12] Corrado Ricci was Superintendent of the Florentine Galleries from 1903 to 1906 . In 1909, he was the general director for Fine Arts and Antiquities of the Ministry of Public Education in Rome and he returned to Florence especially to inaugurate the new Museum in person, cfr. Lucchesi 2012, p. 117.

[13] Cfr. Ivi, pp. 118. Cfr. also Ferri 1909, the catalogue that Pasquale Nerino Ferri, “founding father” of the Collection of Prints and Drawings in the Uffizi wrote on the occasion of the inauguration of the new museum.

[14] Cfr. Lucchesi 2012, p. 119. On the demolition of the city centre, cfr. as well as Detti 1970 and, recently, Sframeli 2007. Detti’s text takes up the title of Carocci’s 1897 work, in which the well-known art historian deplored the unscrupulous demolition of Florence’s “Old Market” (the modern-day Piazza della Repubblica).

[19] Cfr. Aranguren 1956b and Aranguren 1964. In BDU, Aranguren Archive, folder 1 “The Tuscan Society for the History of the Unification of Italy” are the membership cards of Piero Aranguren, dated from 1956 to 1976.

[23] The “Traces of Florence” museum consists of a permanent exhibition and a temporary section with educational tours organised by the Children’s Museum Association (http://museicivicifiorentini.comune.fi.it/palazzovecchio/evento41.htm). 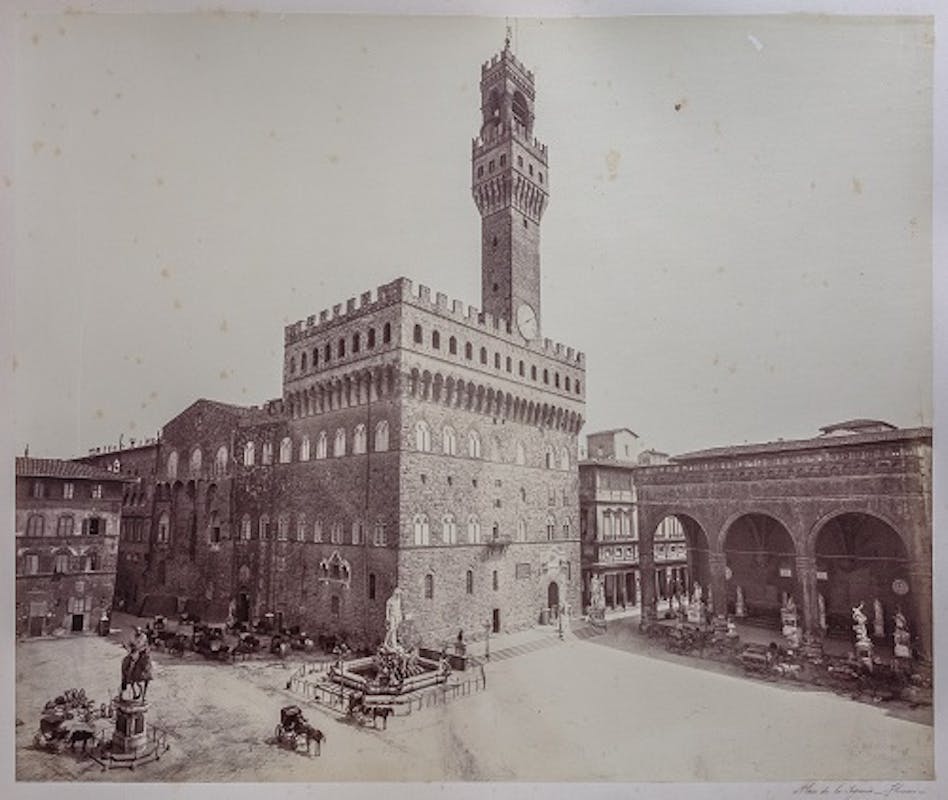 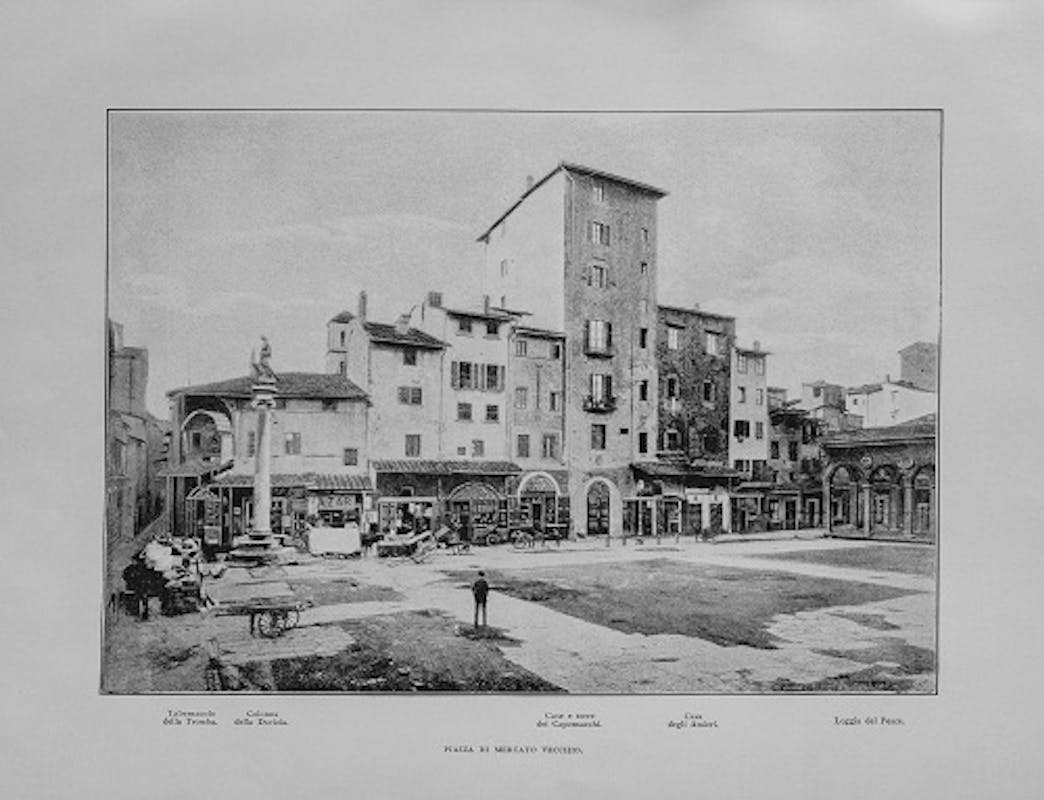 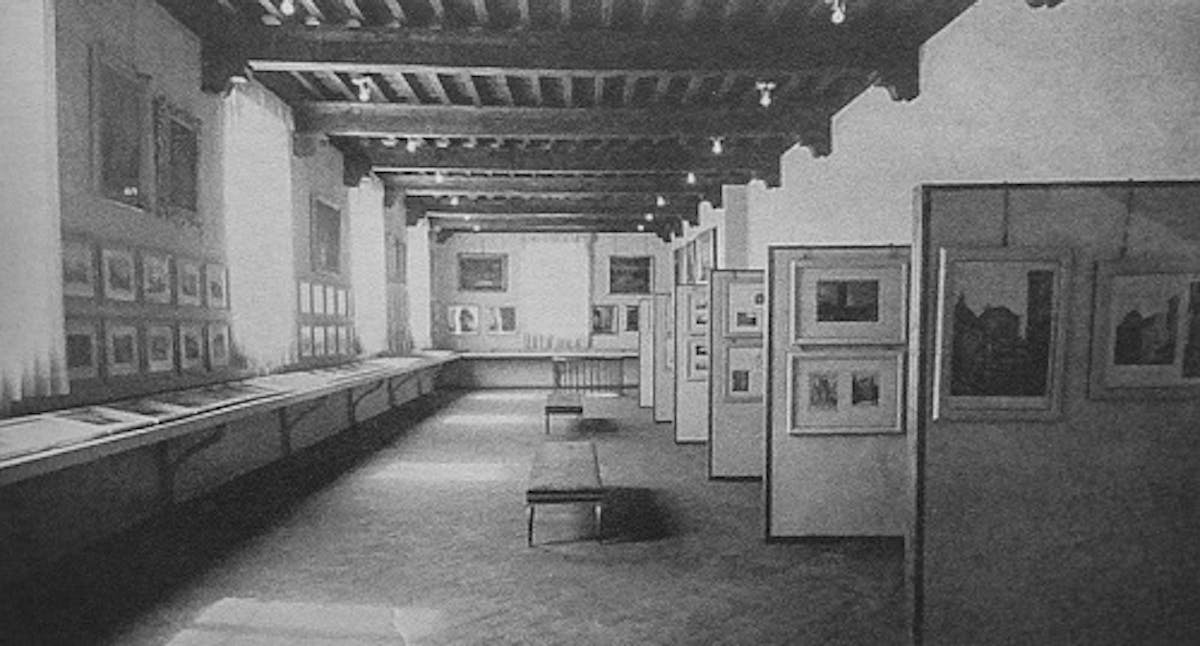 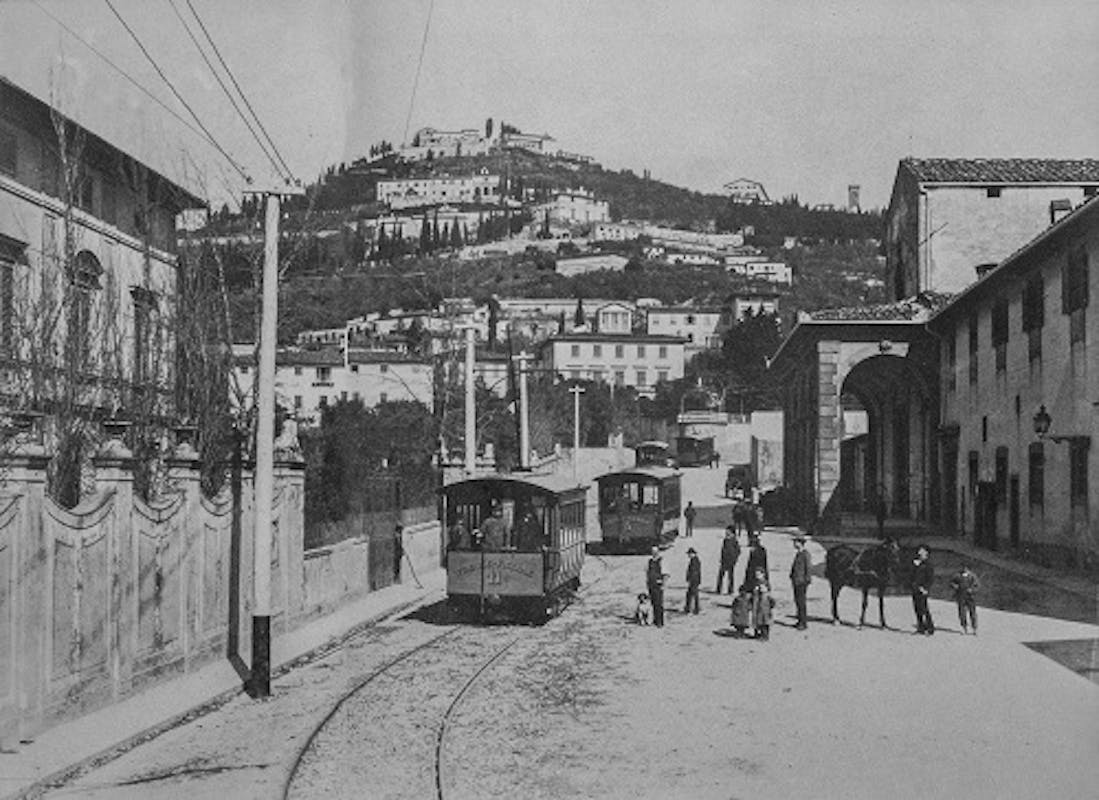 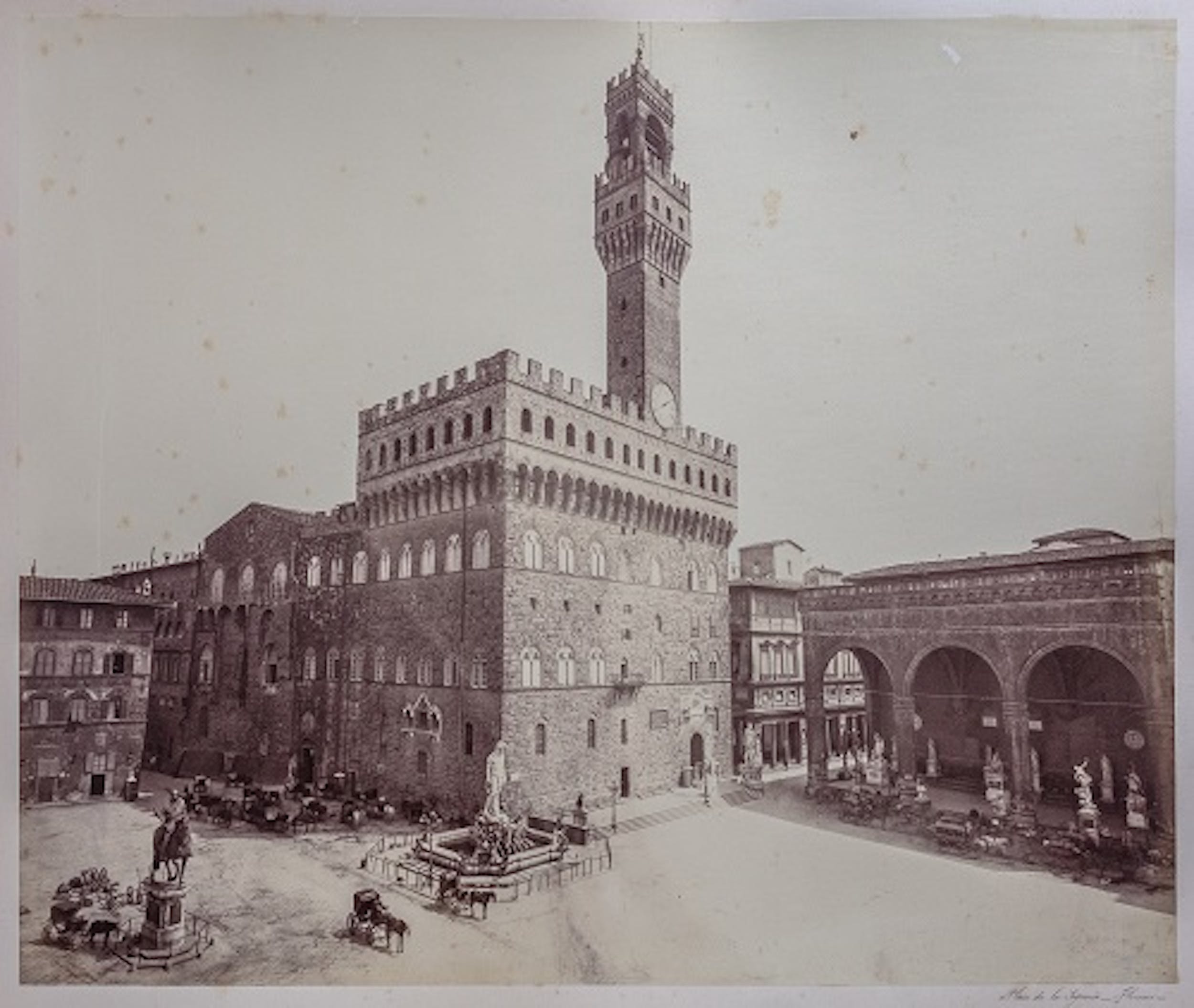 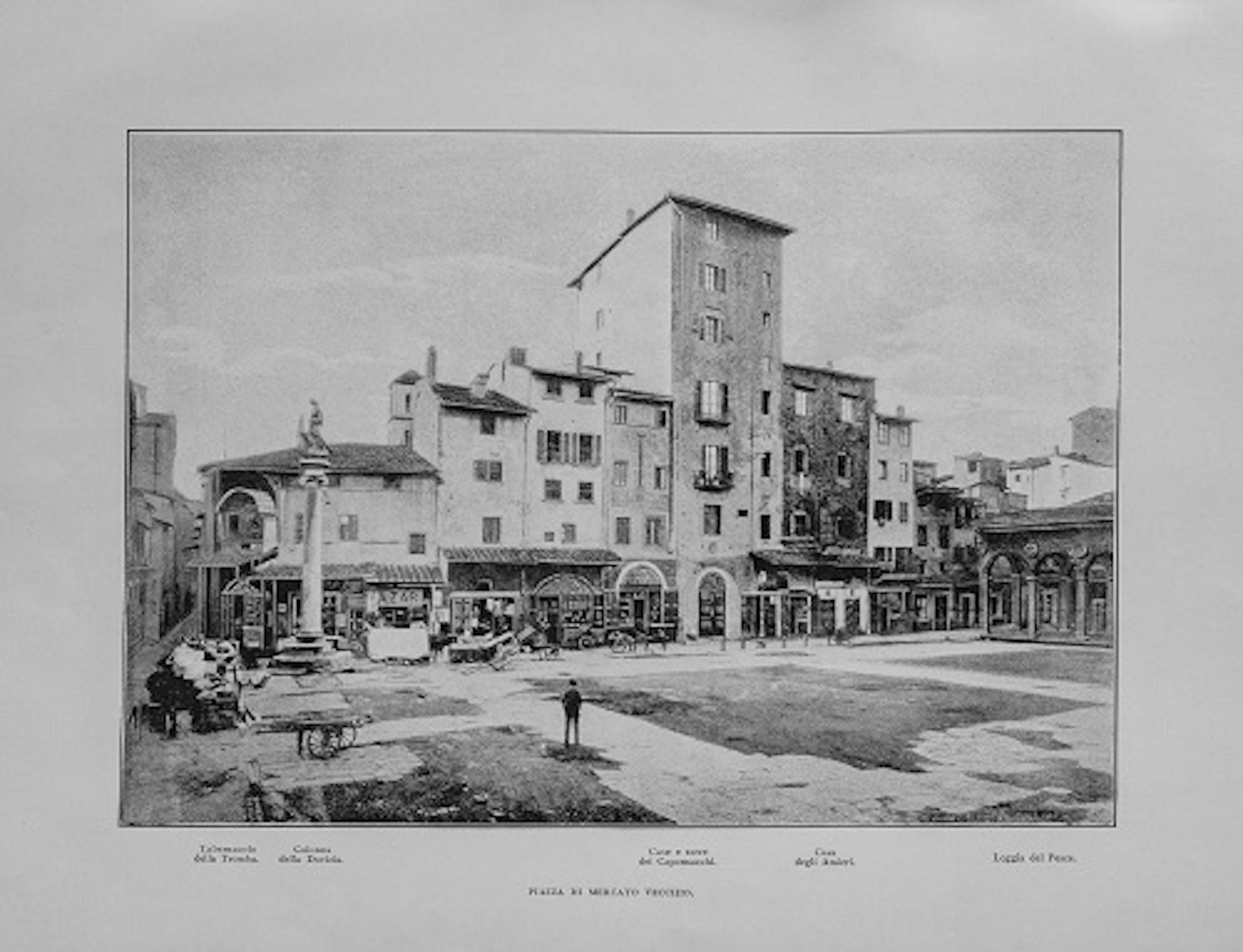 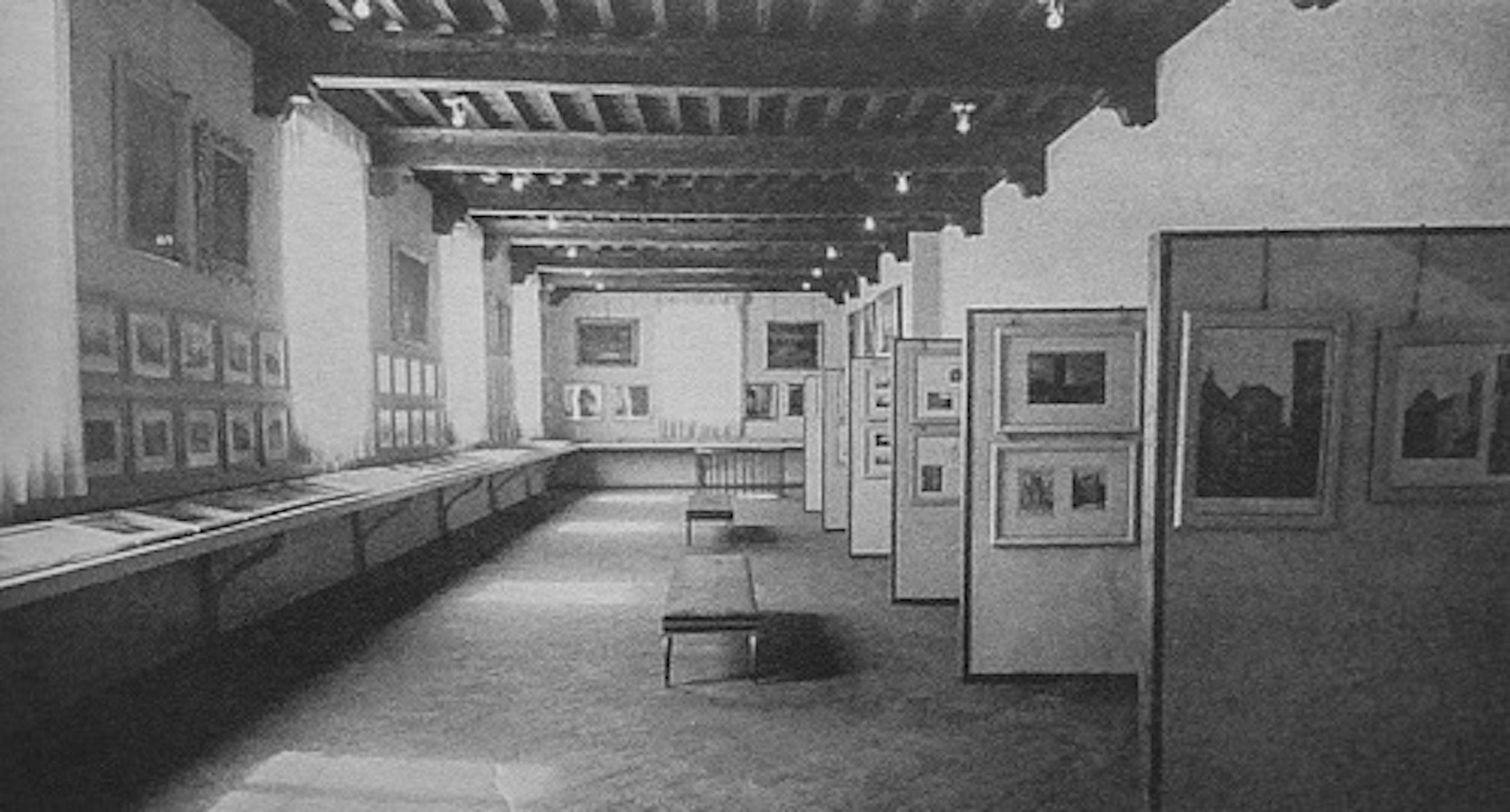 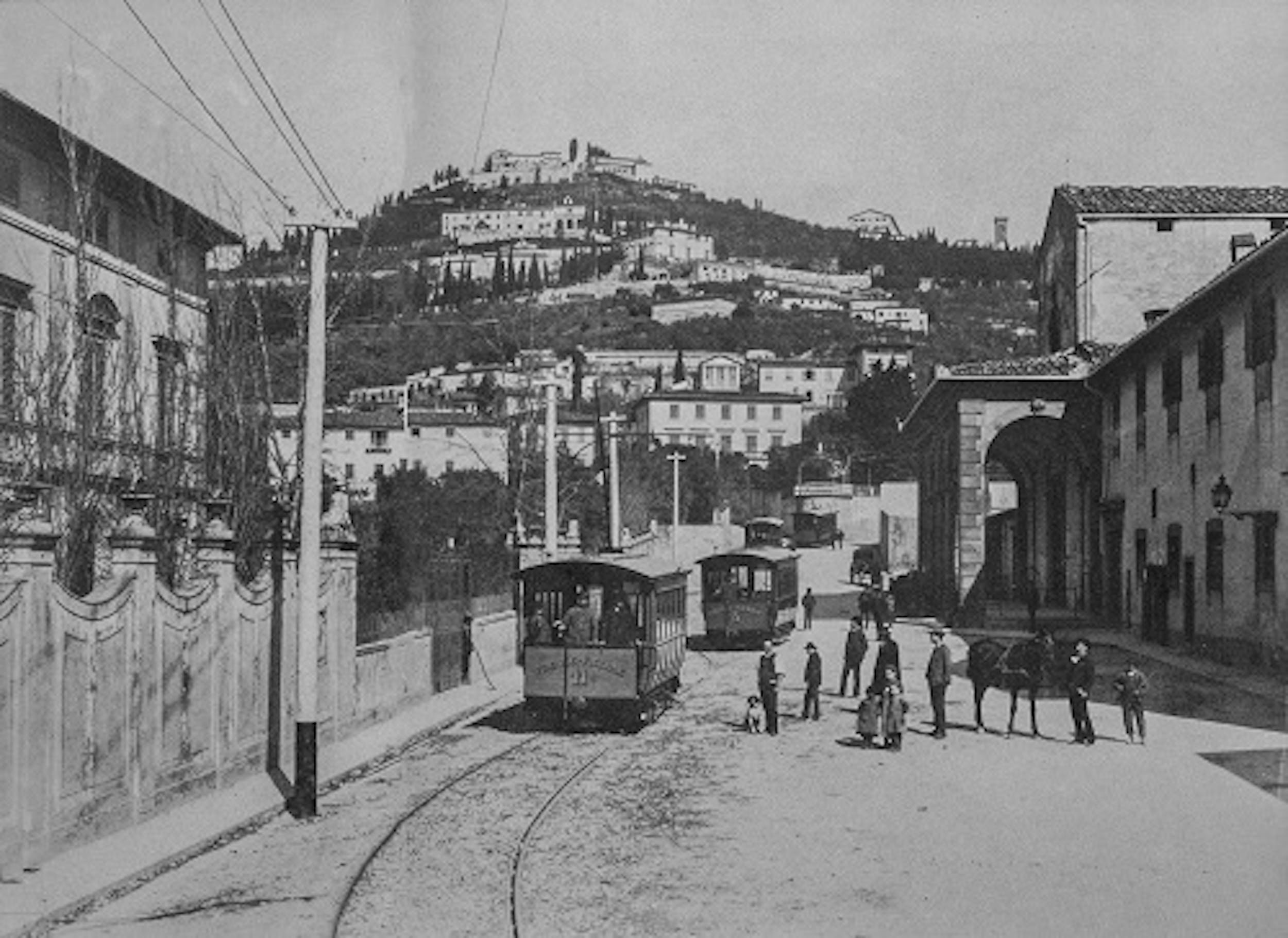