A view over Florence and Tuscany

Originally designed by Vasari as an open loggia with one of the most striking views of Florence, the Terrace of the Map Room, or Terrazzo delle Carte Geografiche, adopted its current set-up towards the end of the 16th century when Ferdinando I de' Medici decided to devote an entire room to extolling the political, military and economic might of his family which had the capacity to unify almost the entirety of present-day Tuscany, initially with his father Cosimo I and later with his brother Francesco I, obtaining formal recognition from European chancelleries as a Grand Duchy in 1569 under Cosimo. Ferdinand I then commissioned the cartographer Stefano Bonsignori to create an updated map of the domains of the Grand Duchy of Tuscany which also included those more recently acquired such as the Sienese territories, highlighted in different colours. The task of painting these monumental maps on the walls was entrusted to Ludovico Buti, who produced highly elegant maps embellished with ornaments, natural and mythological motifs, around 1,200 place names written in gold letters, and even painted depictions of sixteenth-century landscapes and “skylines” of many towns and cities which, in some cases, constitute the first ever representations of those places, as if they were postcards or ante litteram photographs! All the most famous place names of Tuscany, its sea and its islands can be found on these maps; some have remained unchanged over centuries, the pronunciation or spelling of some have changed alongside the evolving Italian language, and some have changed altogether.

While faithfully reproducing the 16th-century version, the depiction of the Island of Elba on one of the three walls dates back to the mid-19th century when the original was dismantled when reconstructing the wall. Meanwhile the coffered ceiling, the work of Jacopo Zucchi, is embellished with mythological and allegorical motifs of classical origins and was transported in its entirety, as we see it now, from Rome, where Ferdinand I resided as a cardinal before becoming Grand Duke. Finishing off the geographical context of the map is a semi-precious stone surface depicting the port of Livorno, a 16th-century work by Cristofano Gaffurri based on a drawing by Jacopo Ligozzi.

It took around two years to renovate the rooms and paintings, which involved restoring the colours of the delicate wall paintings and gold place names, as well as the wooden structures and paintings on the ceiling, seriously damaged by water leakage, and resurfacing the handmade terracotta flooring along the lines of the 16th-century original. The work was carried out by the Uffizi Galleries in coordination with the Opificio delle Pietre Dure, the Workshop for Semi-Precious Stones in Florence, with contributions from Friends of the Uffizi Galleries. Coordinating the restoration were Antonio Godoli (for the architectural side), Anna Bisceglia (scientific director for wall and panel painting restoration), Cristiana Todato (who oversaw the technical direction), and Daniela Smalzi (who conducted documentary and archival research).

To avoid crowding and ensure you enjoy your visit, the room features a computerised system that automatically regulates access to a maximum of twenty people. 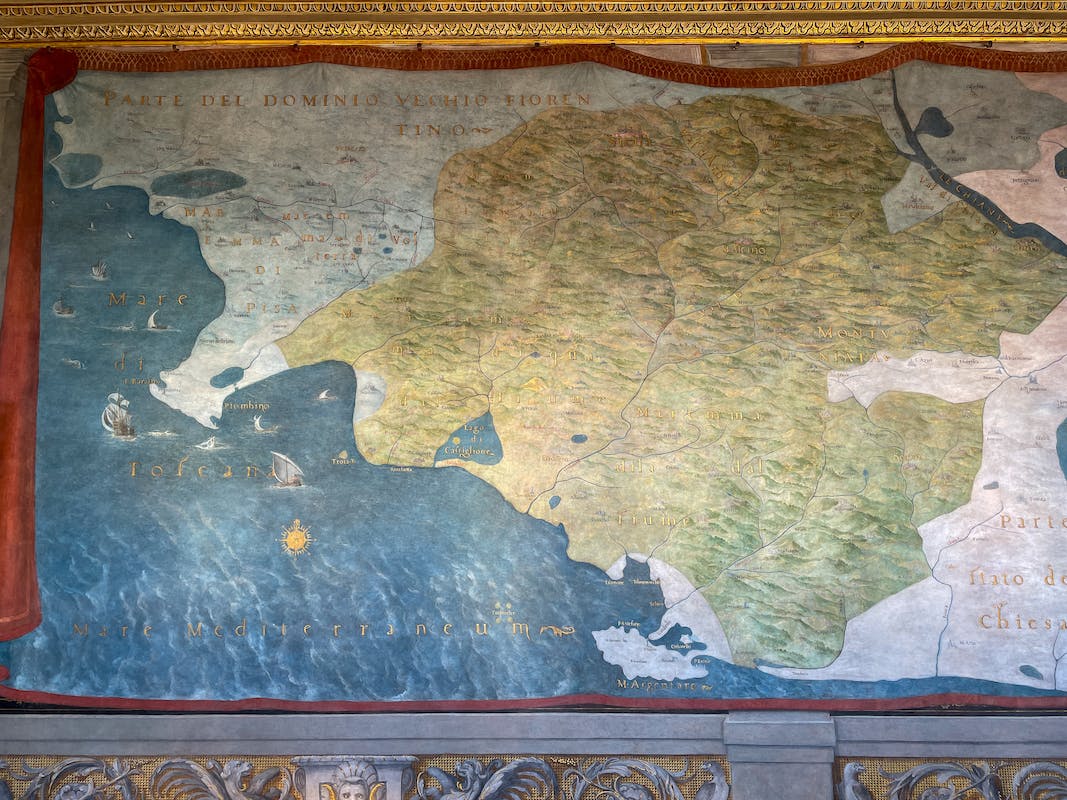 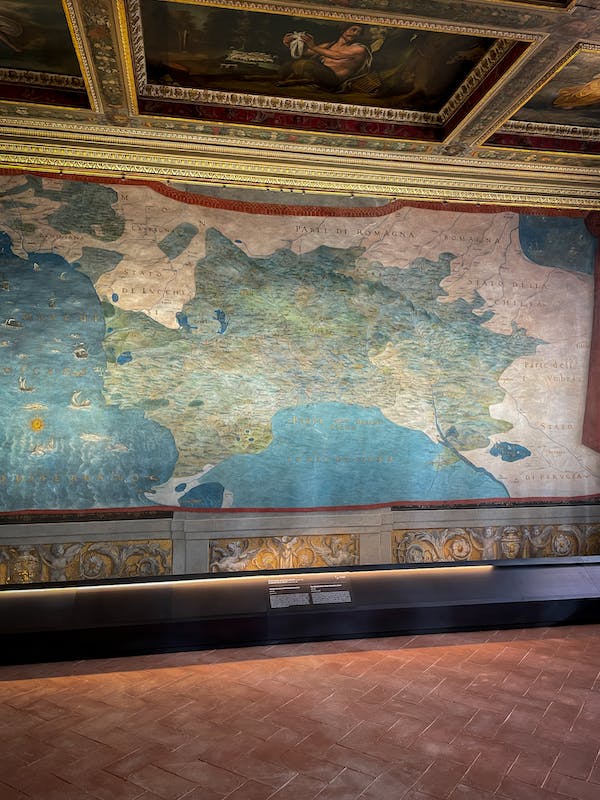 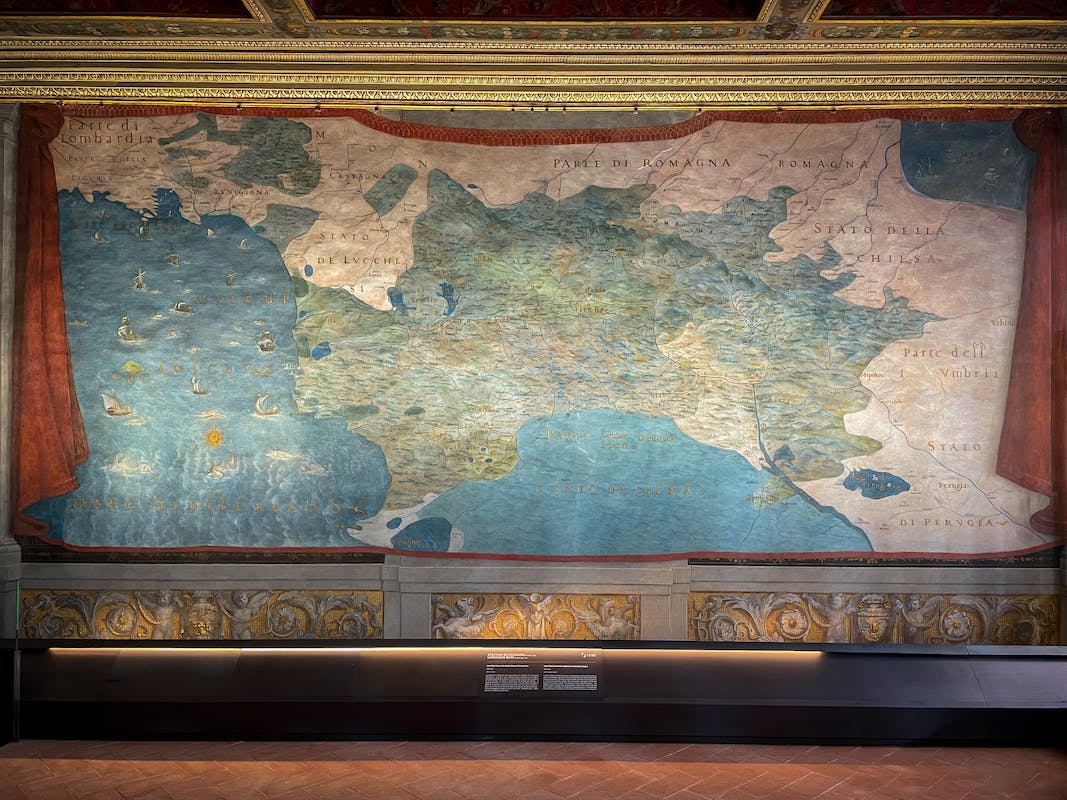 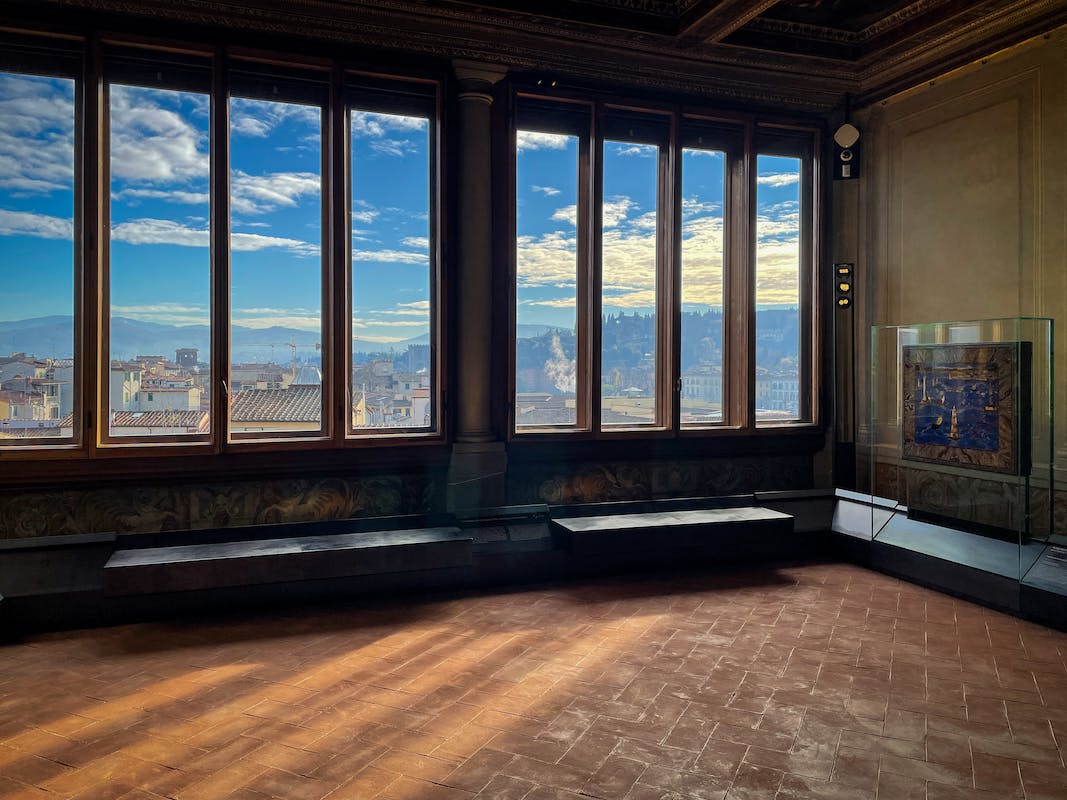 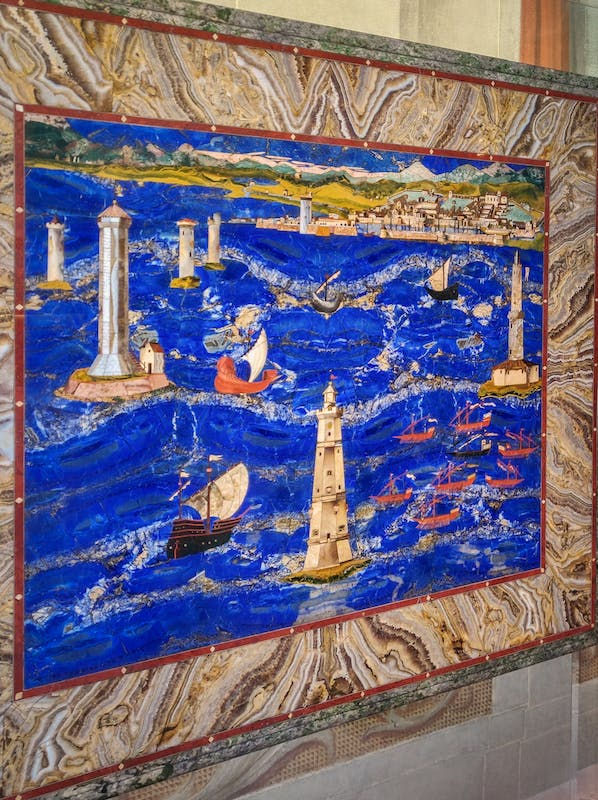 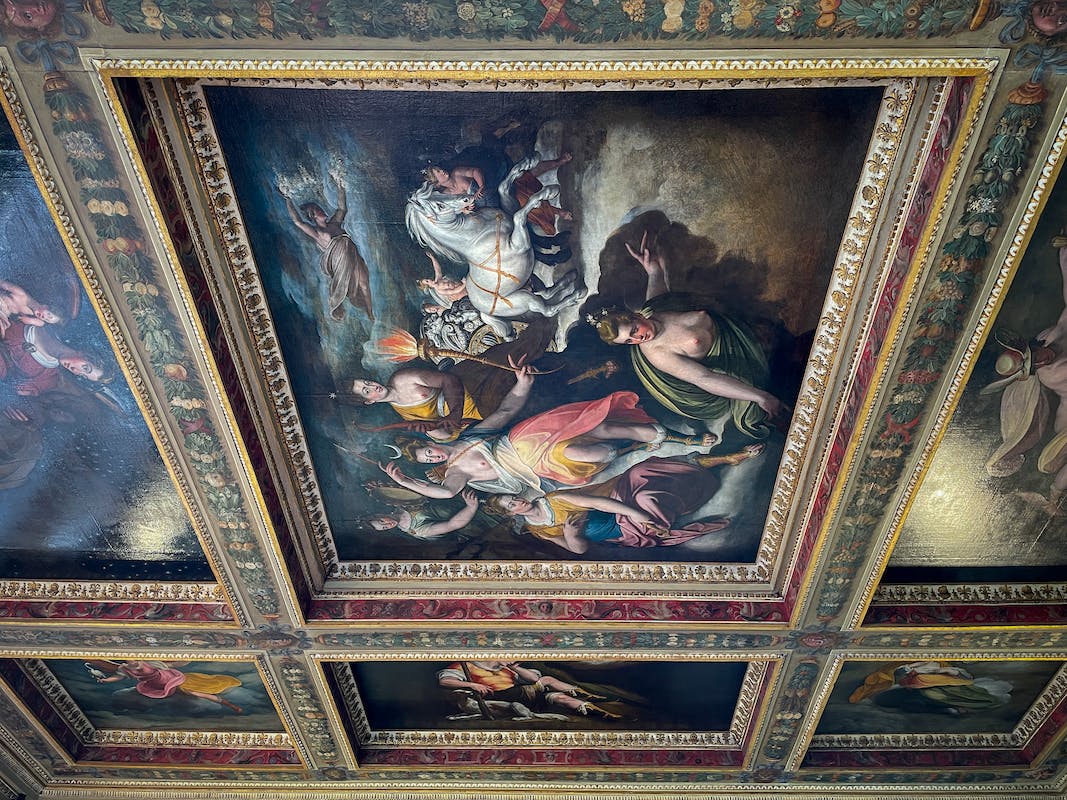 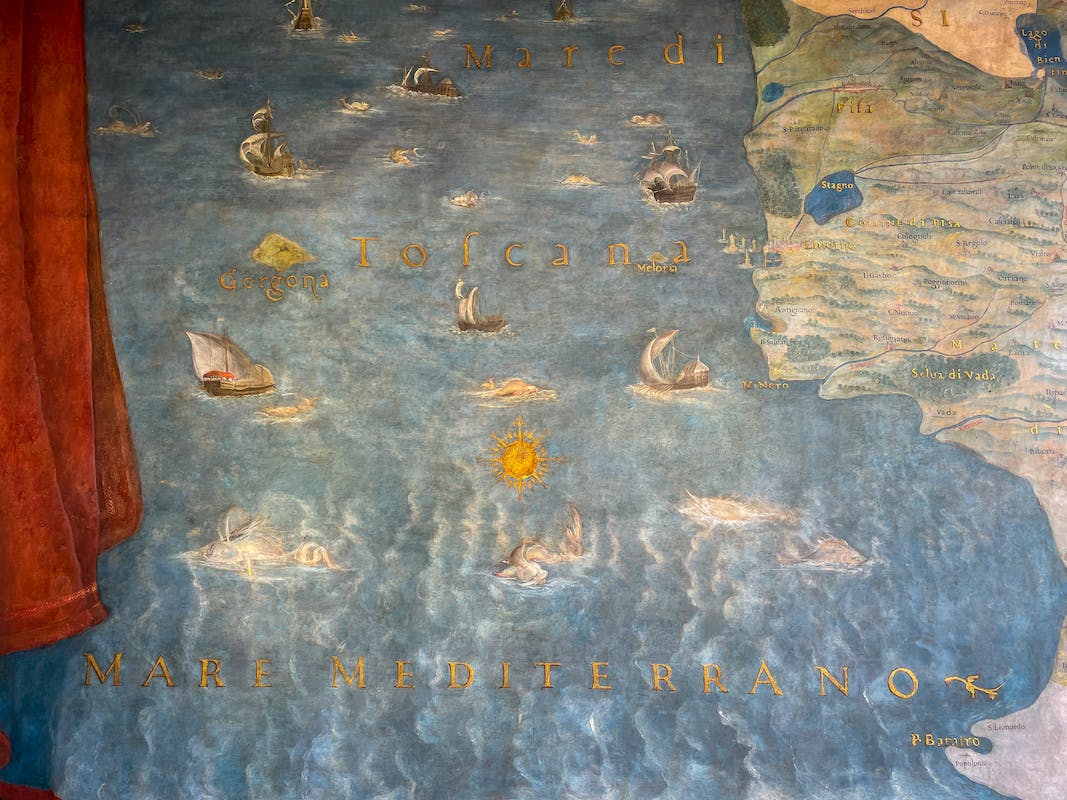 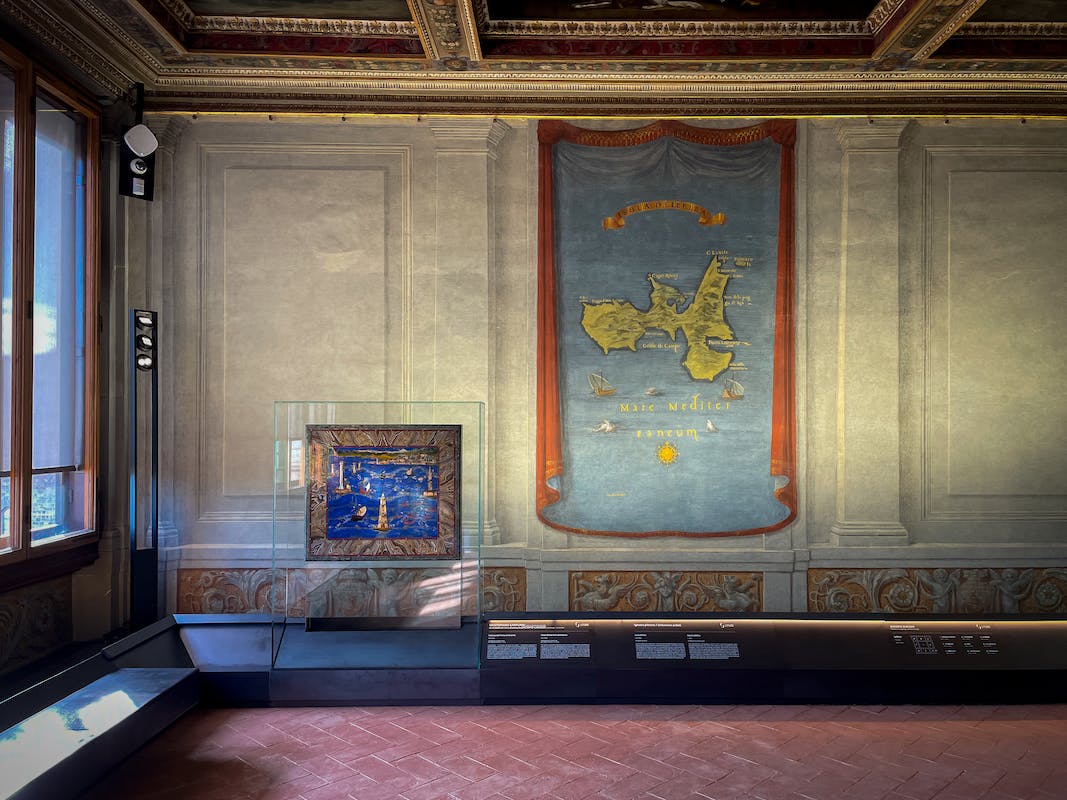 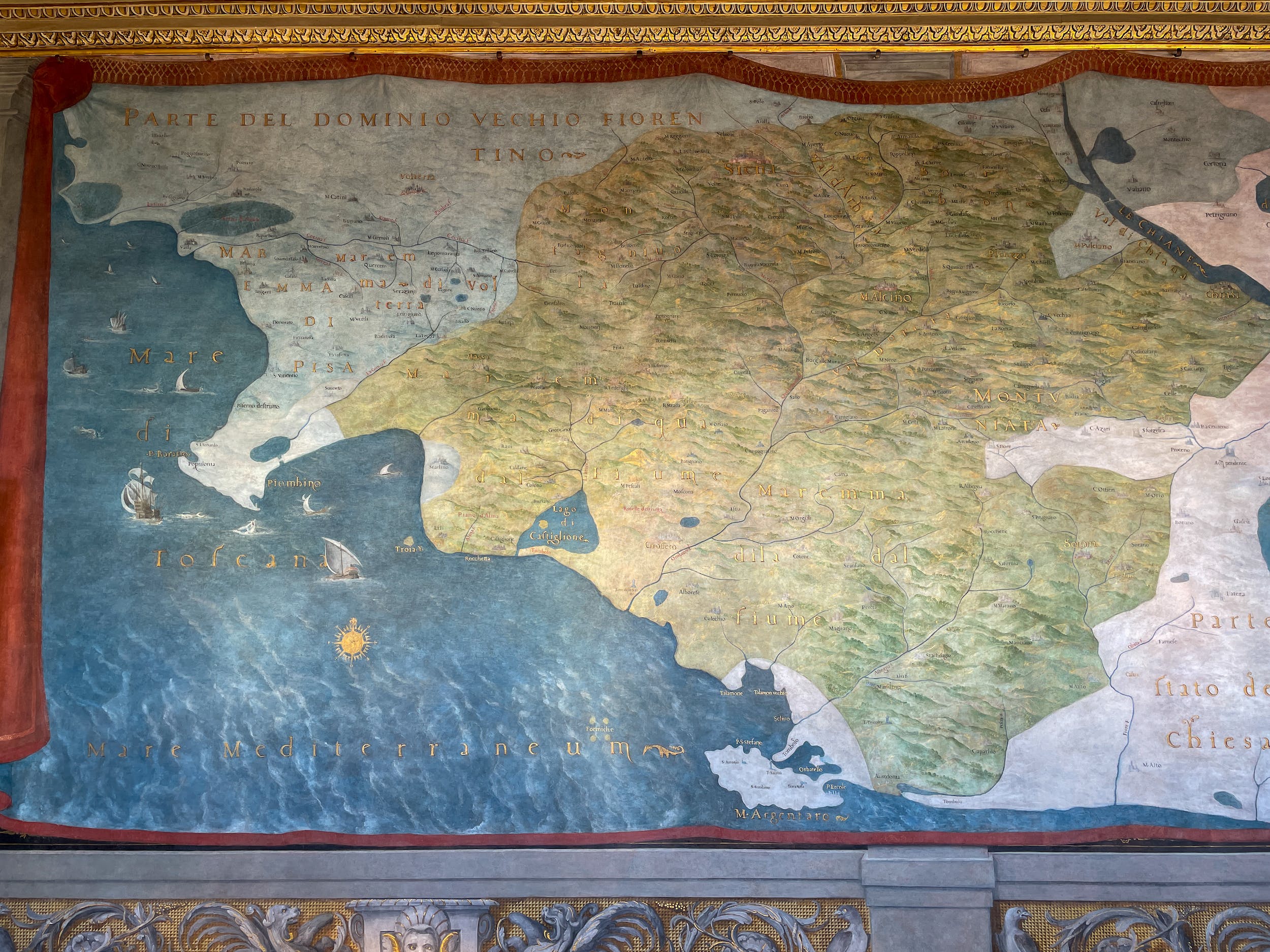 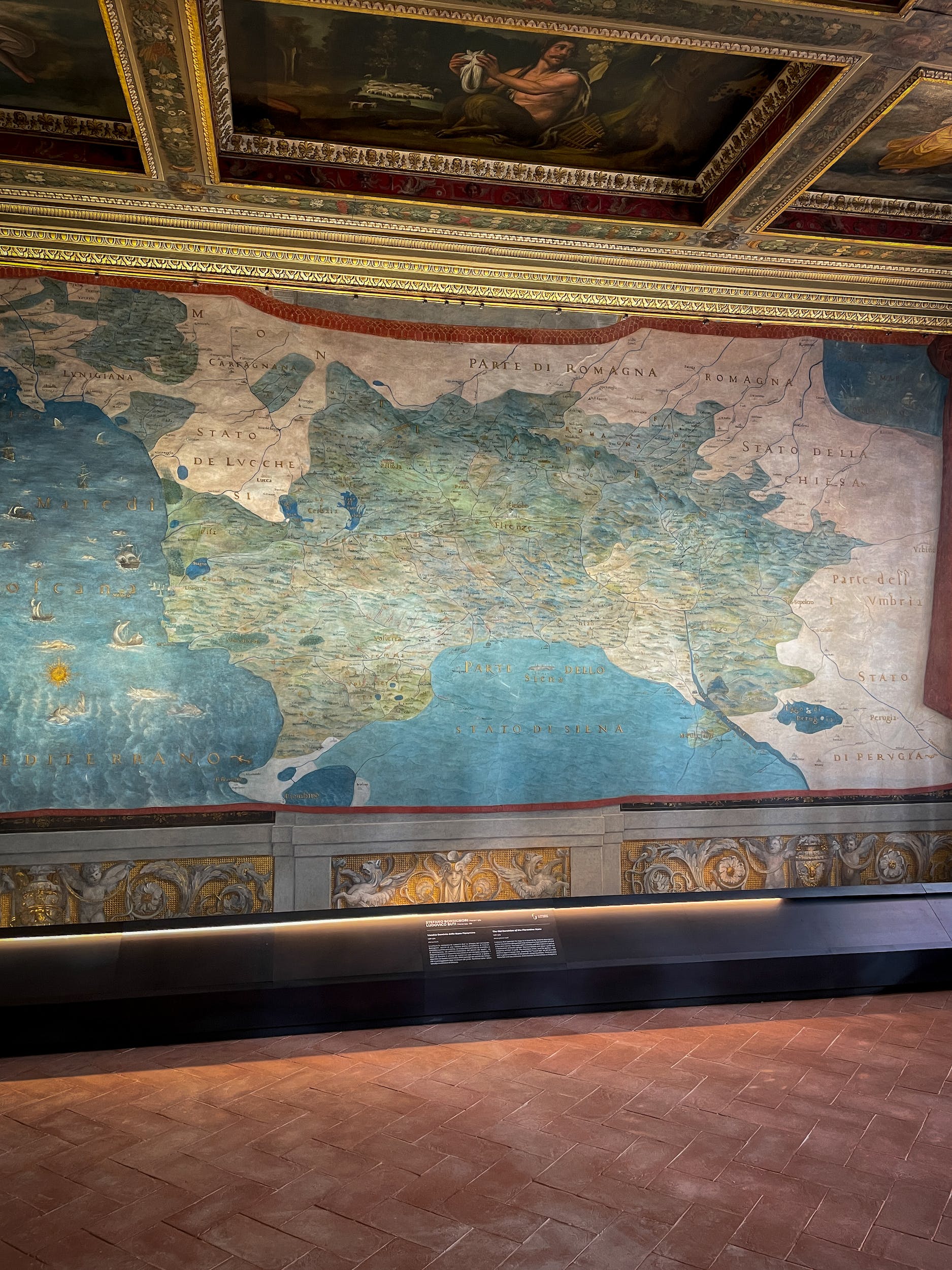 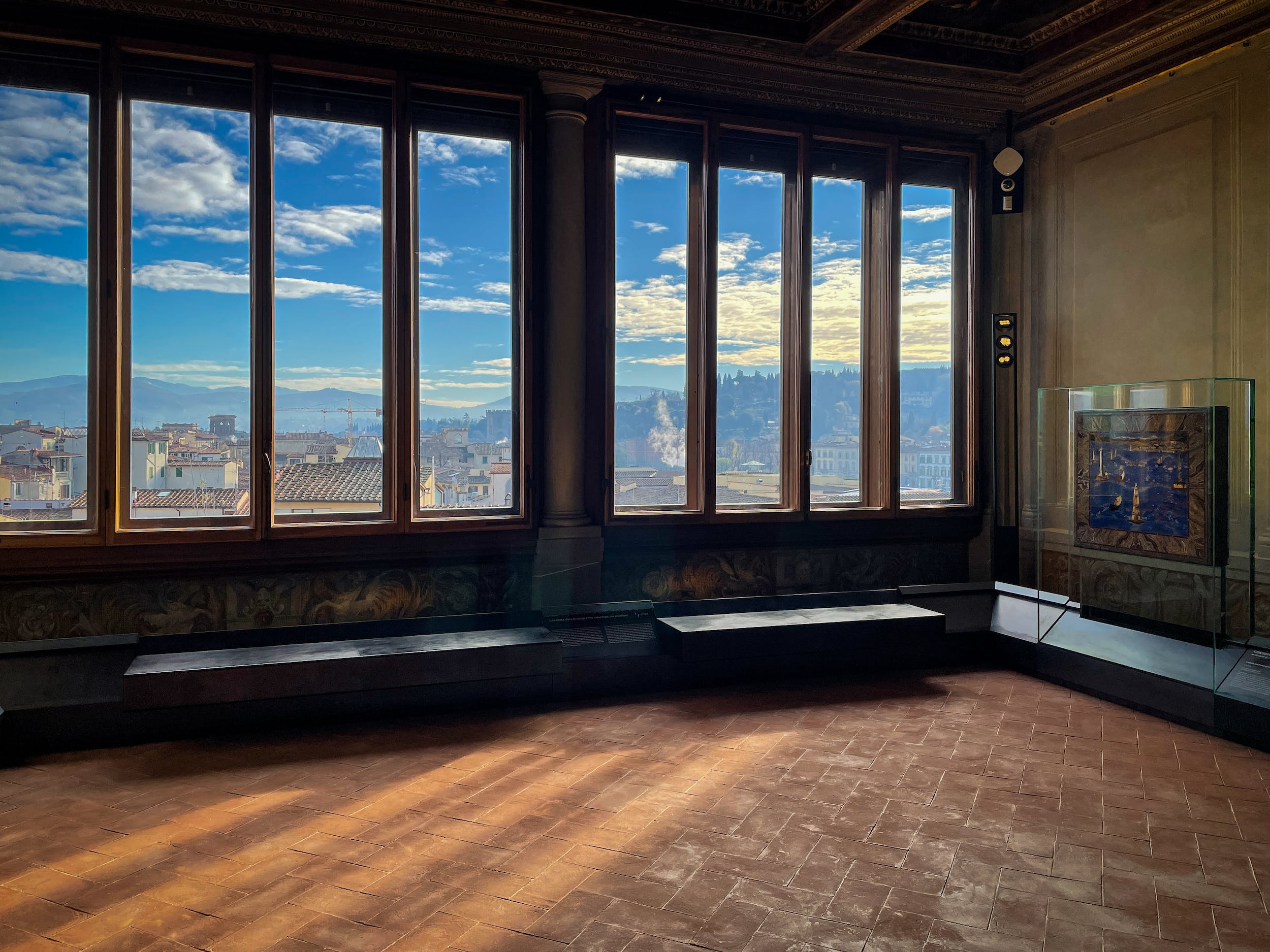 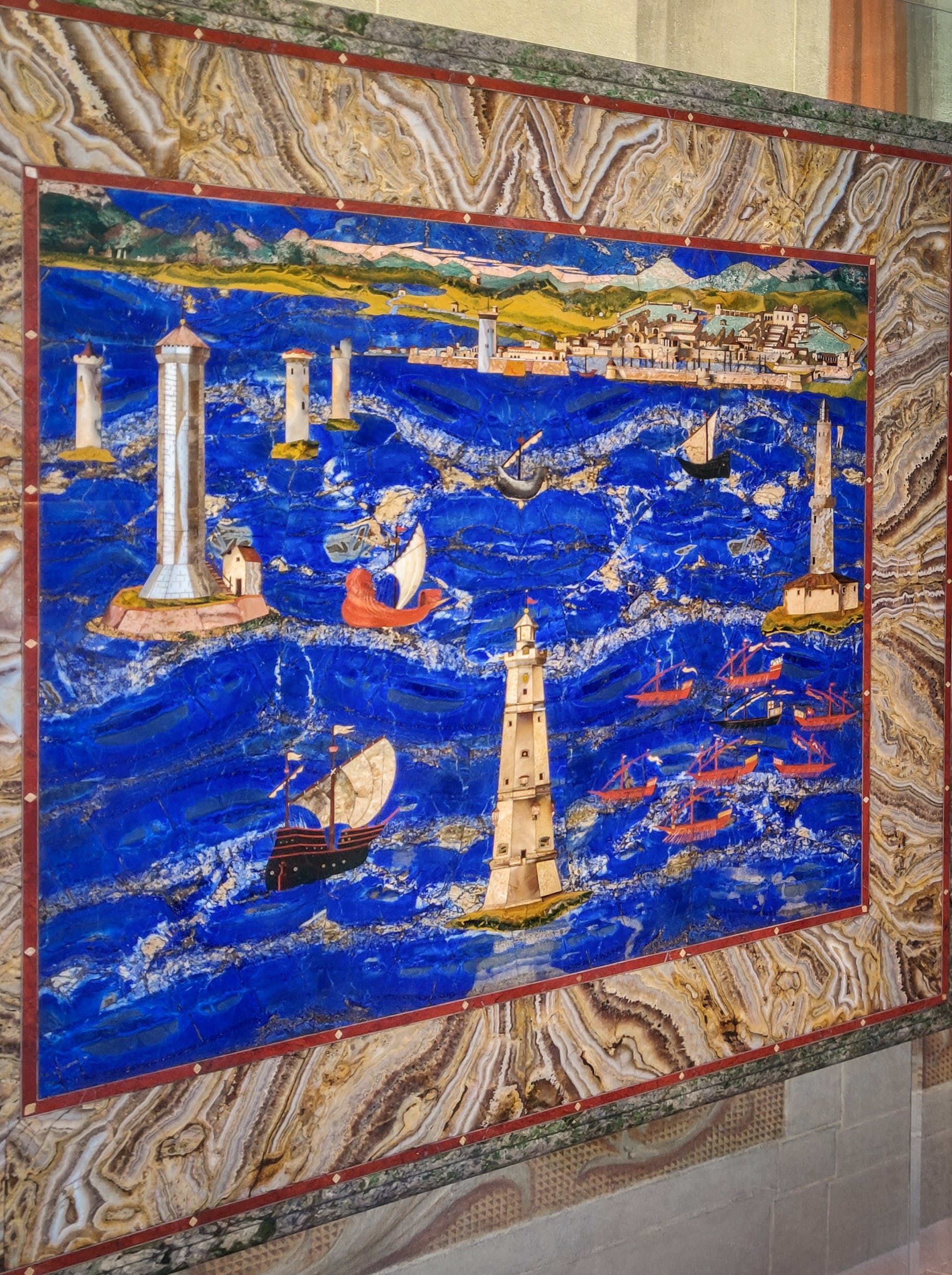 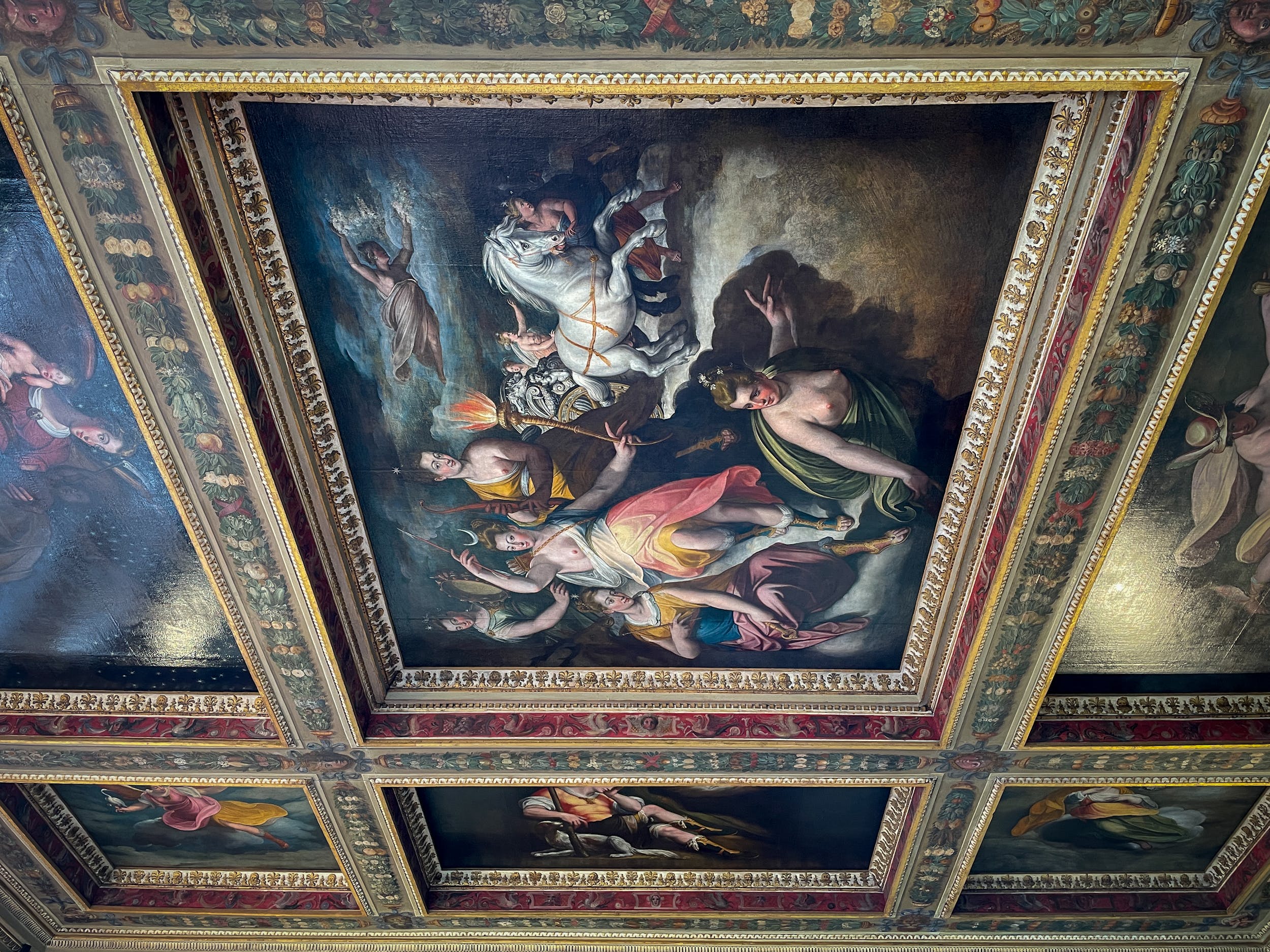 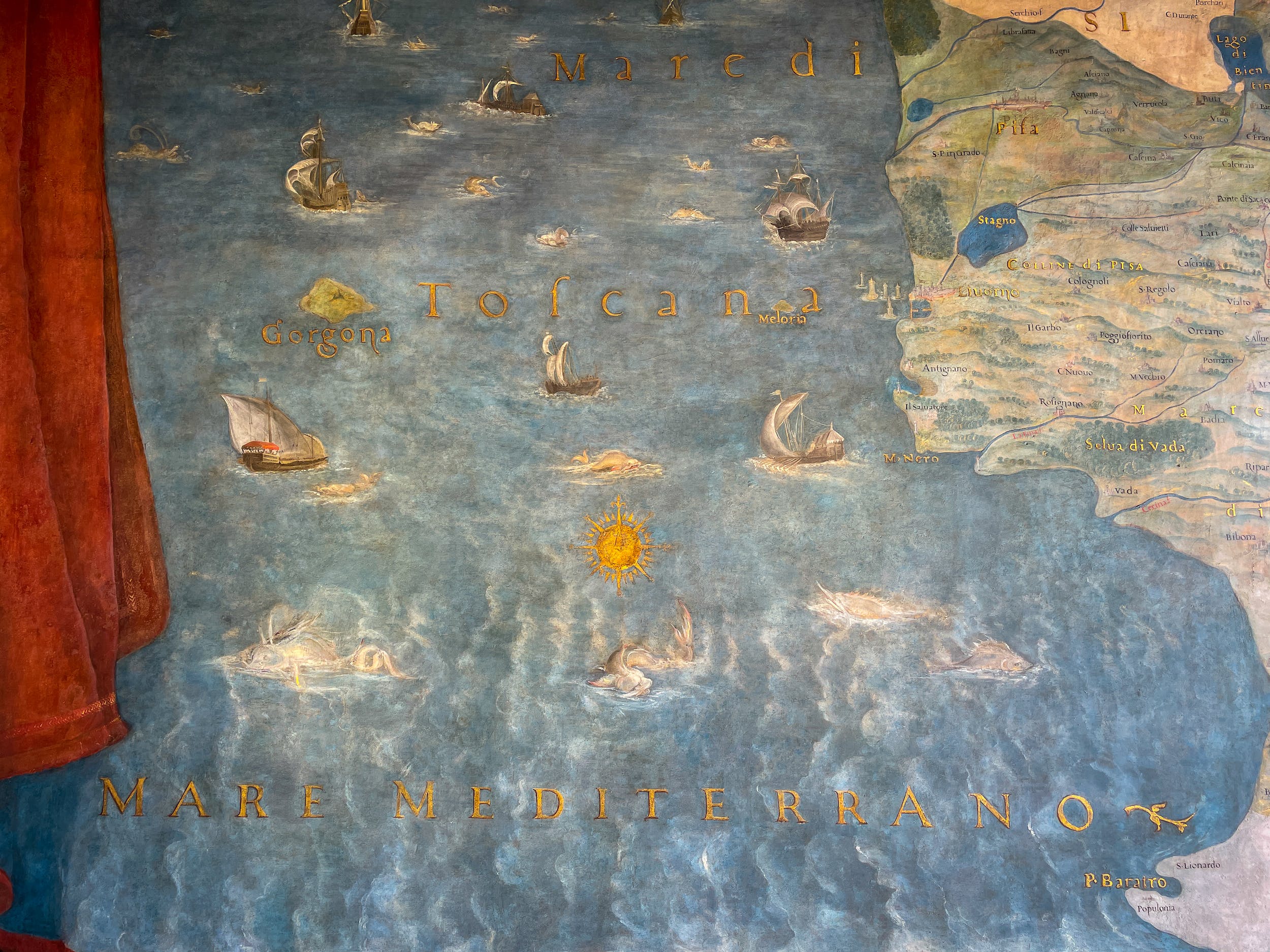 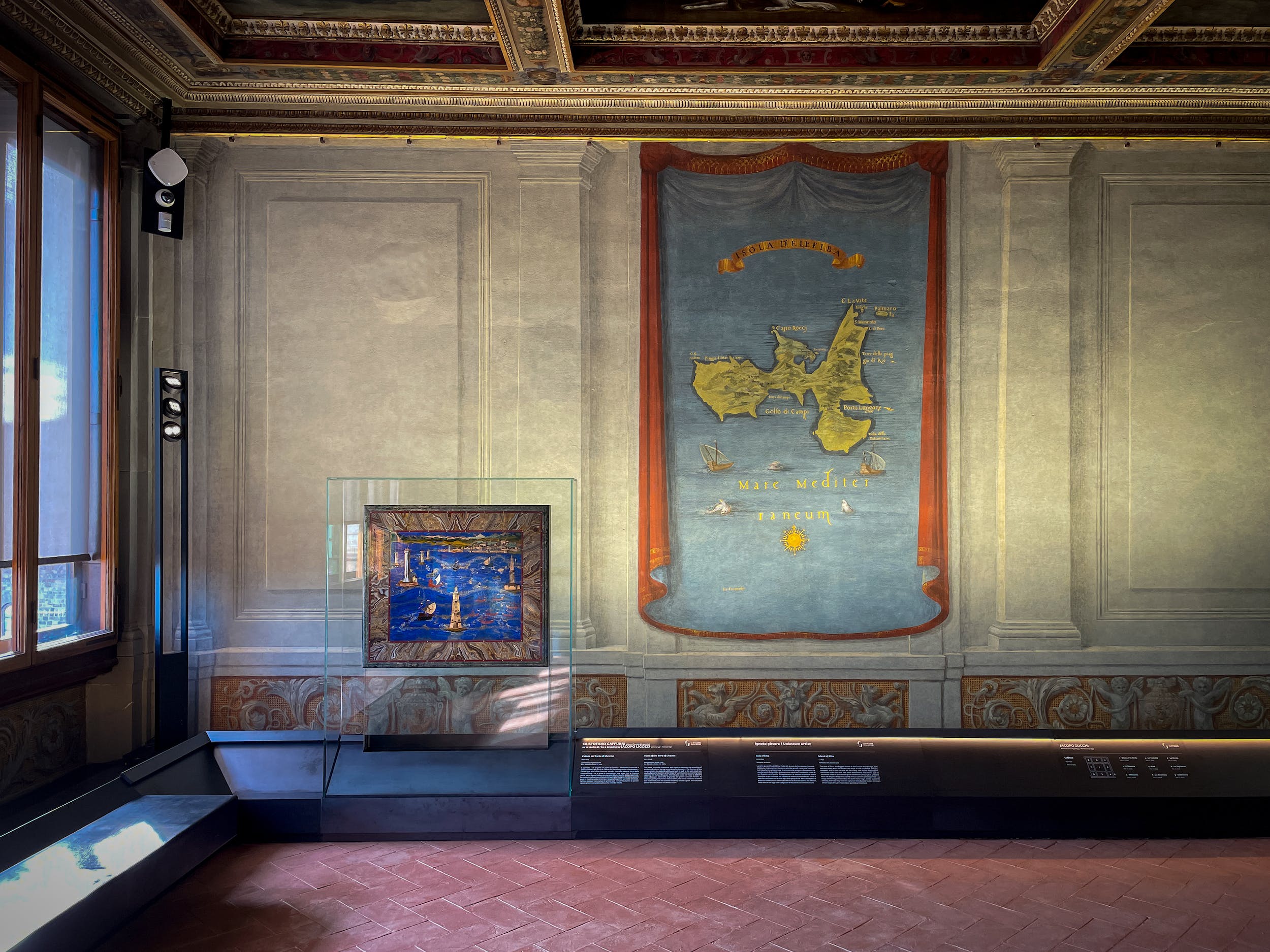