At the beginning of the New Year, the painting will return to the Uffizi

The delicate chromatism of the Santa Lucia de' Magnoli Altarpiece, a classic by Domenico Veneziano, one of the masters of the 15th century, is shining once again.

Dating back to around 1445, the painting was restored by the Opificio delle Pietre Dure thanks to the full financing, through Art Bonus, by patron Giampaolo Cagnin, who in this way wanted to pay homage to the memory of his wife Anne Marie Bauer, a restorer engaged in the rescue of works of art after the flood that hit Florence in 1966. This delicate operation, which started in 2019 with an extensive diagnostic campaign, has been presented to the press today, December 12.

One of the most striking works of the early Italian Renaissance, as well as the only panel signed by Veneziano (who proudly inscribed 'OPVS DOMINICI DE VENETIIS' on the lower border), the Magnoli Altarpiece was commissioned for the high altar of the church of Santa Lucia de' Magnoli in Via de' Bardi by the Capponi family from Florence. The figures are positioned within a portico created with accurate rendering of perspective and characterised by bright colours - white, green, blue and pink - that confer a magical, supernatural dimension to the scene. Inside the portico, the Madonna with the Child is flanked by Saints Francis, John the Baptist, Zenobius and Lucy. The saint holds a plate on which are depicted her own eyes, a symbol of the martyrdom to which she was subjected. In the background, beyond the architectural composition, it is possible to see the crowns of three orange trees, whose presence combines a symbolic meaning - spiritual fecundity - with a reference to the importation of this particular species of tree, attested in those years by documents of the Medici family. When the Santa Lucia de' Magnoli Altarpiece became part of the Uffizi Galleries' collection in 1862, it had already been deprived of the predella consisting of five compartments depicting the Annunciation; St. Francis Receiving the Stigmata; St. John the Baptist in the Desert; the Miracle of St. Zenobius and the Martyrdom of St. Lucy (now divided between the National Gallery of Art in Washington D.C., the Fitzwilliam Museum in Cambridge and the Staatliche Museen in Berlin).

The work will be previewed on December 21 at the Opificio delle Pietre Dure workshop in the Fortezza da Basso, 10 a.m. - 1 p.m. and 2 p.m. - 4 p.m. (free admission, reservation required at https://opd-effettorestauro.eventbrite.it). Its return to the Uffizi Gallery inside the rooms on the second floor dedicated to Paintings from the 15th Century is planned for the beginning of next year. The painted surface had been impoverished by a drastic cleaning operation, followed by a patination with glue, that dates back to when the work first entered the museum. This restoration caused the colours to lose their brilliance and gave a dull and arid appearance to the painting, to the point that it was compared to a mural painting and its fundamental characteristic of overall luminosity was no longer perceived. In those days, a critic defined the work as 'a Chinese screen' precisely to stigmatise the loss of brilliance and colour saturation.

Today, after the restoration completed by the Workshop of the Opificio delle Pietre Dure, we can actually talk of a 'rediscovered' painting.

Domenico Veneziano was defined by art historian Luciano Bellosi as a 'painter of light'. Even though he made clear his Venetian origins also in this altarpiece thanks to the inscription on the steps of the throne, his works do not present any obvious stylistic or technical inheritance from his homeland. The first certain document regarding the artist is a letter dated 1 April 1438 addressed to Piero de' Medici, father of Lorenzo the Magnificent. The missive allows to understand how Veneziano was familiar with the world of Florentine art and it is probably after these contacts that he began his famous activity in Florence, to which pertains the 'Magnoli Altarpiece' that dates back to a few years later (circa 1445). 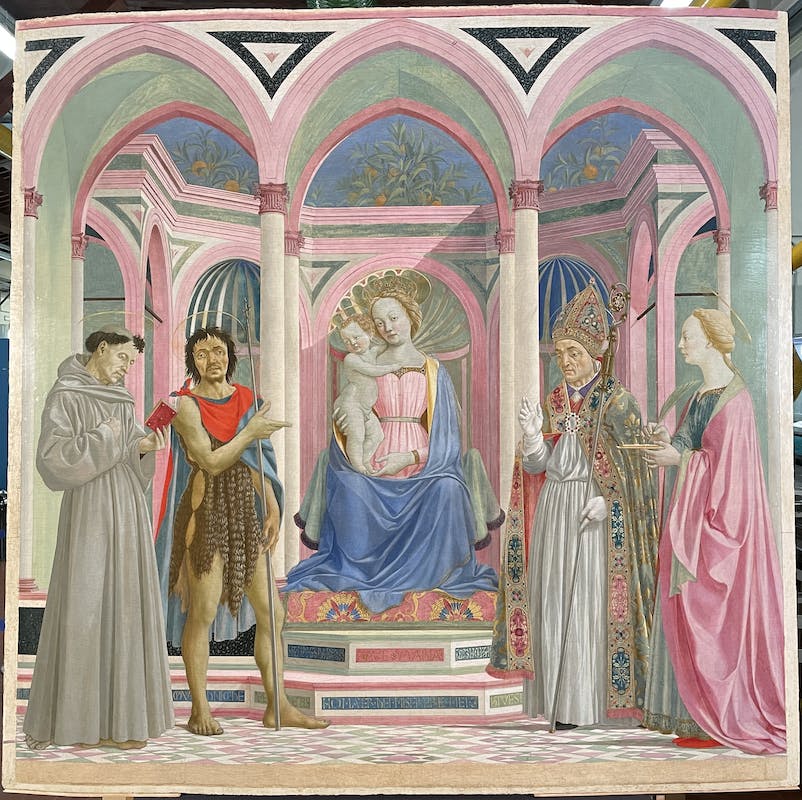 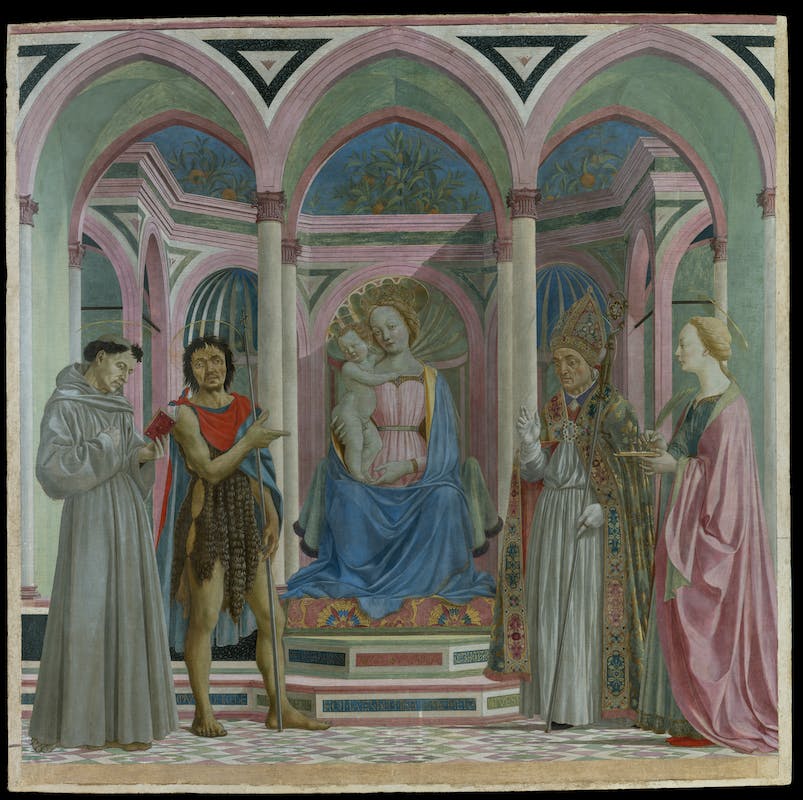 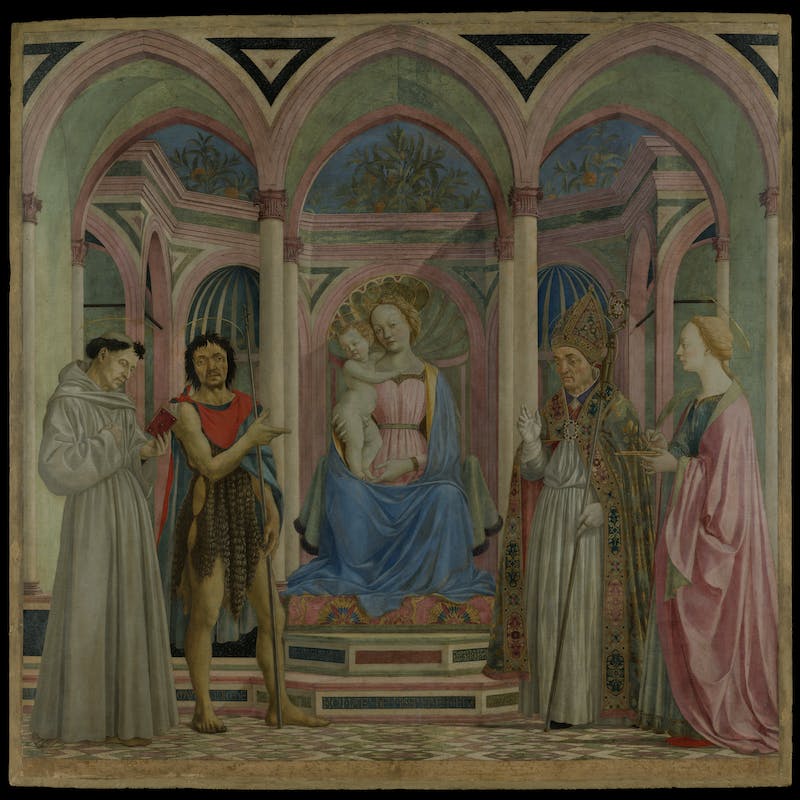 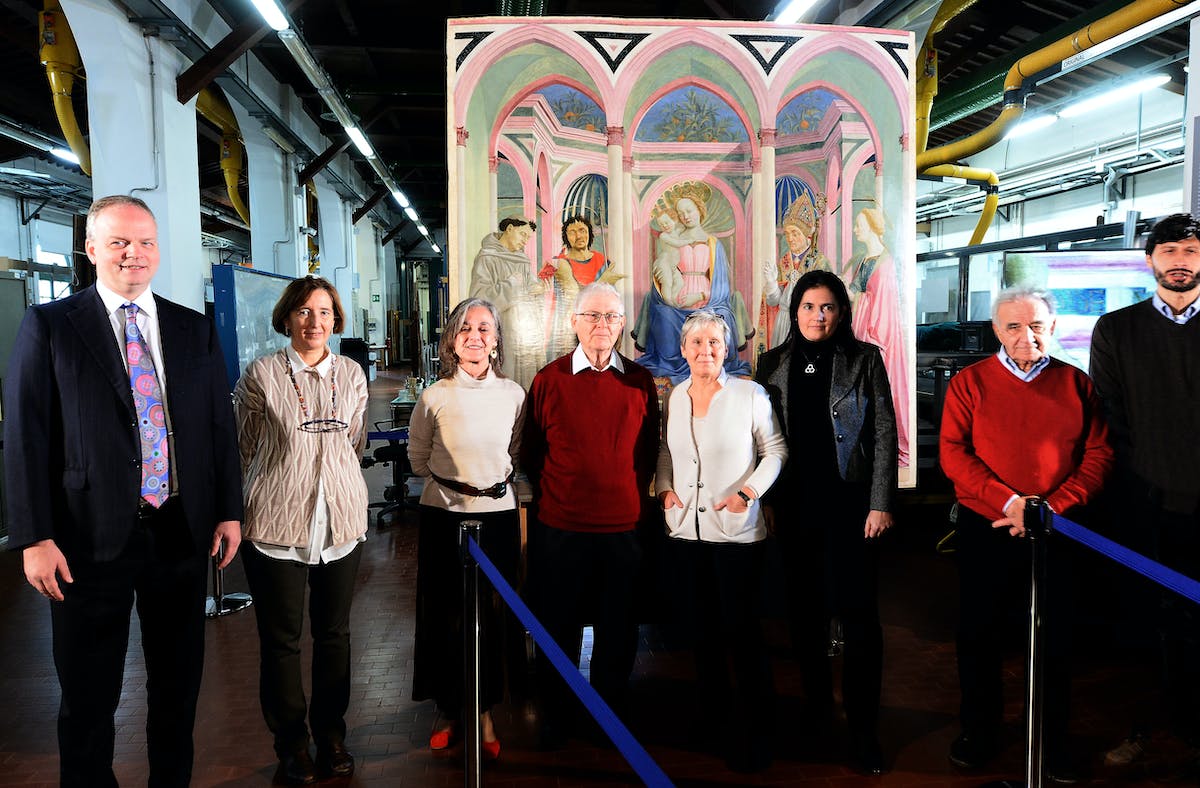 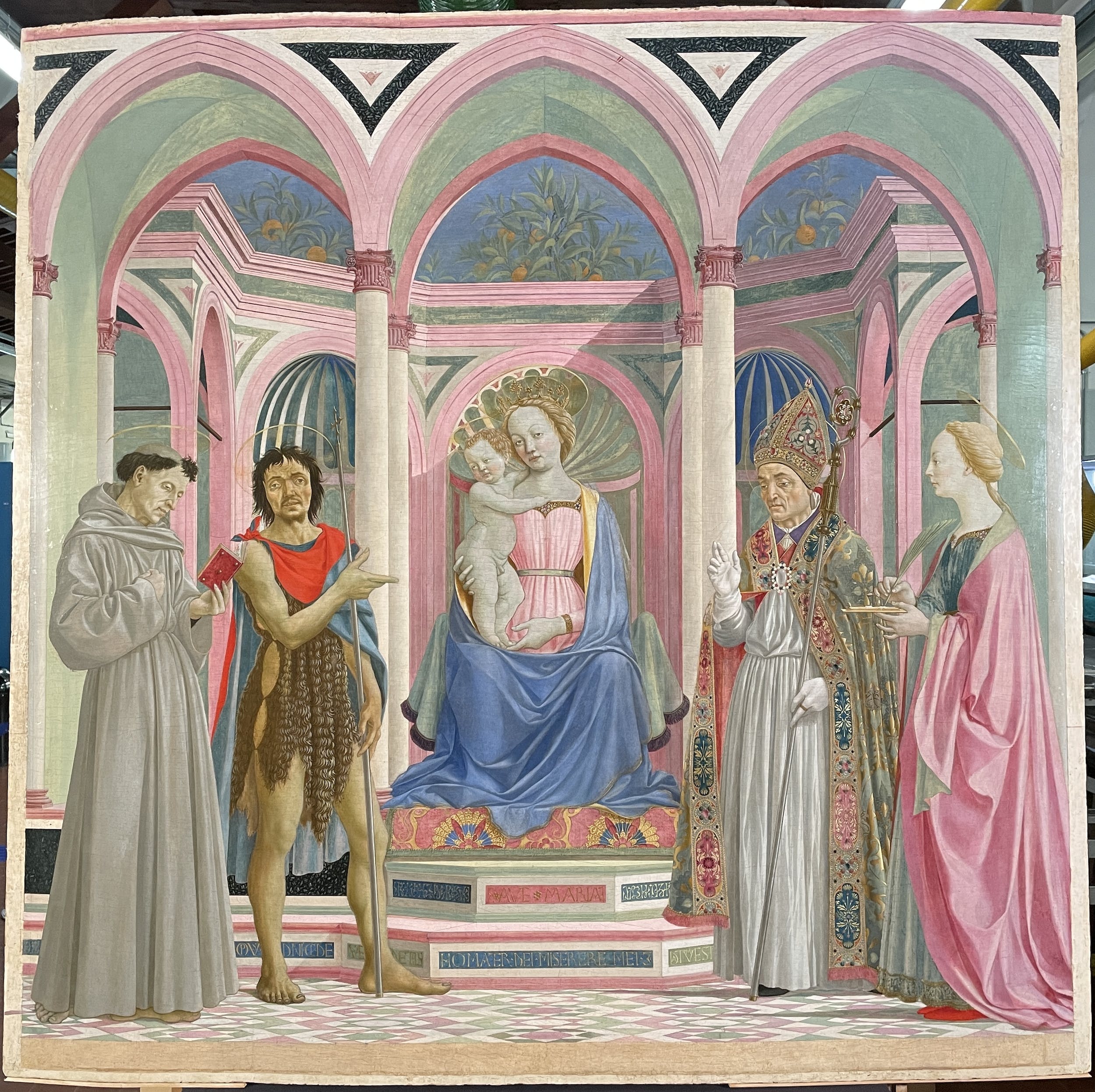 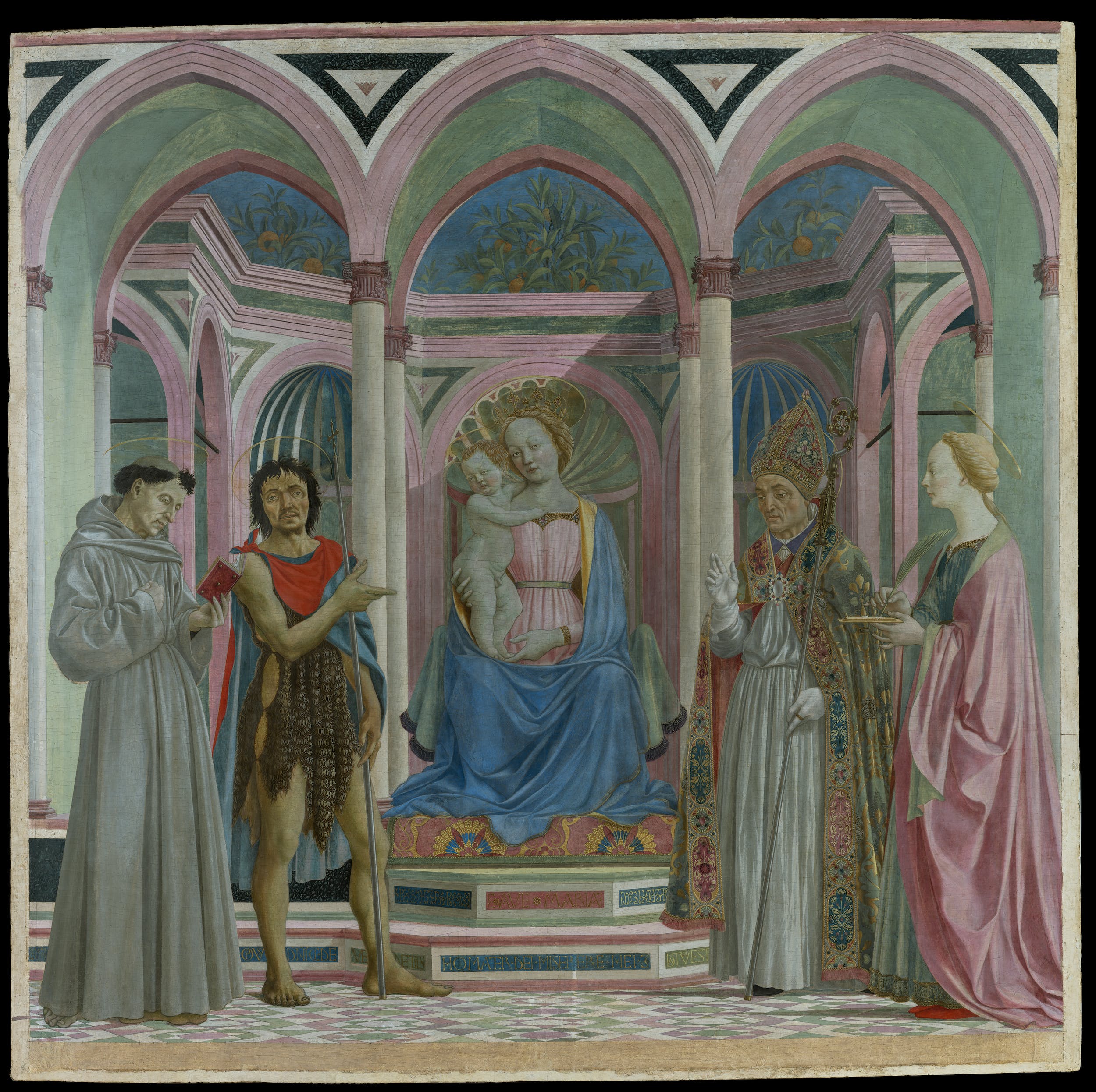 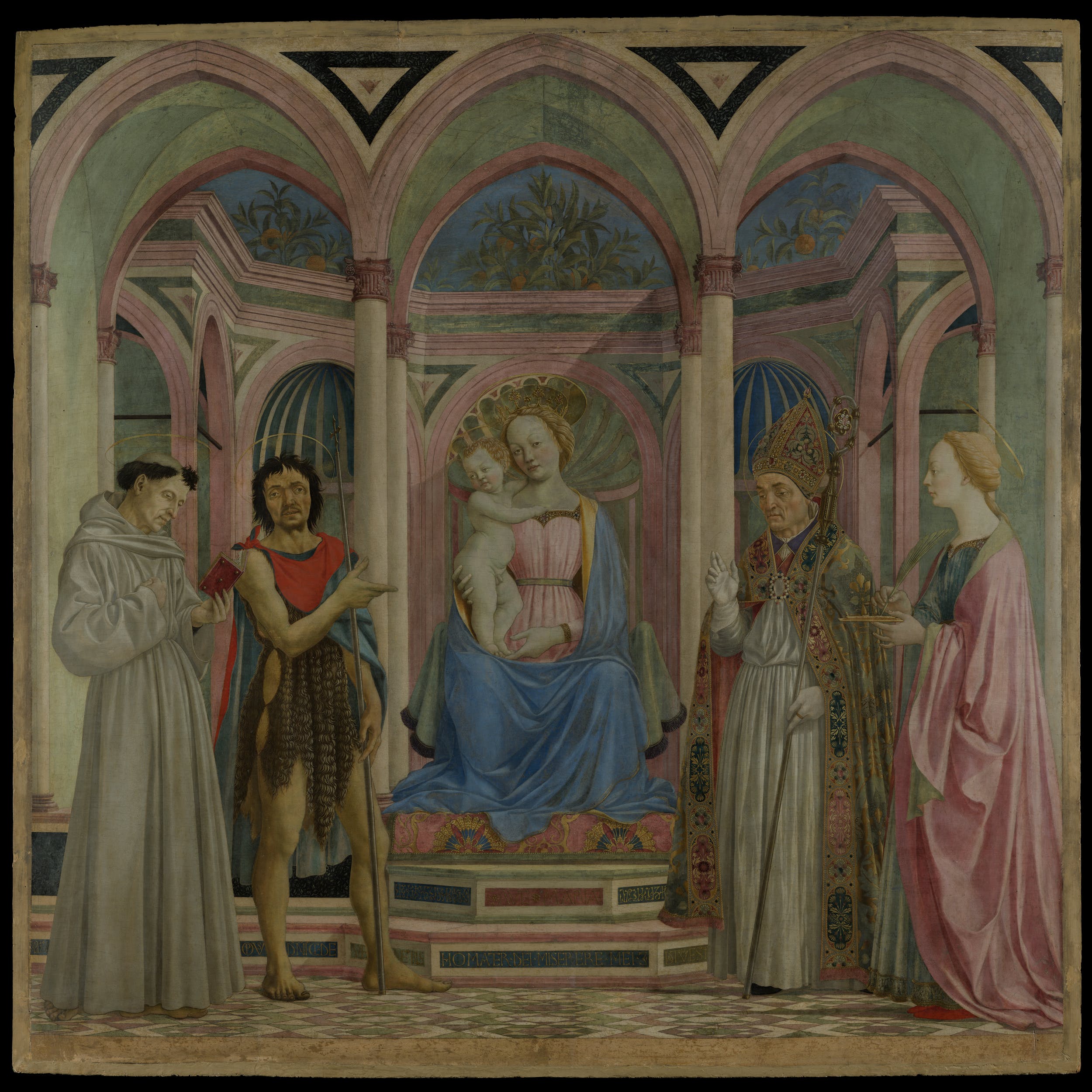 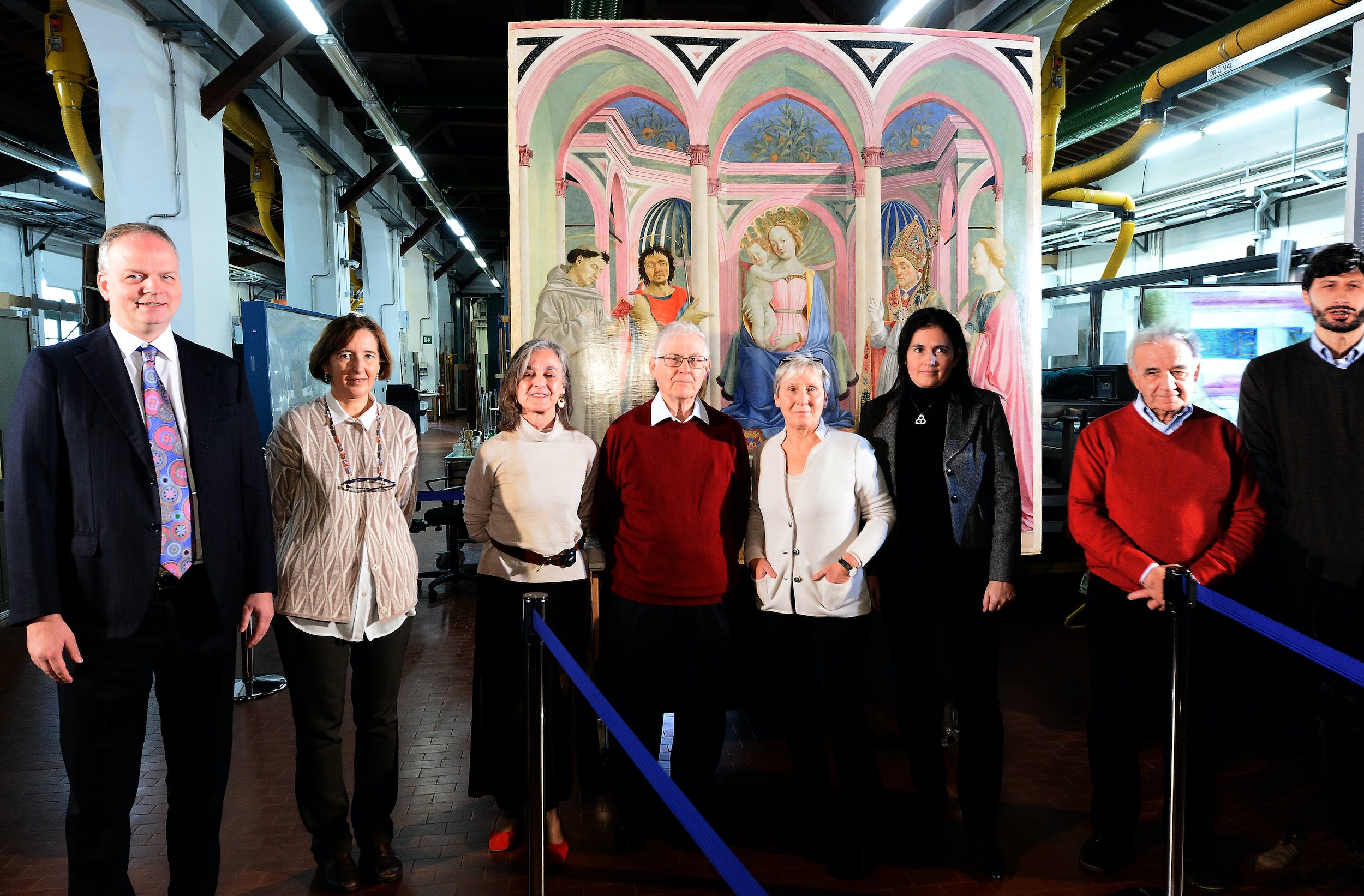