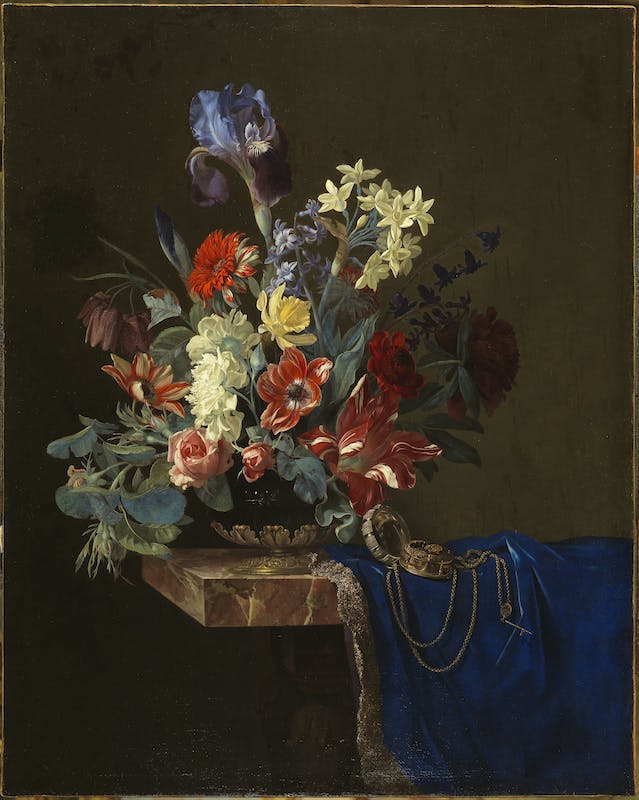 The luxuriant composition of flowers in a gemstone vase with a metal base was made by van Aelst as a pendant to the painting of Still life with fruit and a crystal vase near which it is still exhibited. Both works were commissioned to the Dutch painter by Prince and Cardinal Giovan Carlo de' Medici, his most important patron during his stay in Florence.

The dominant tone in the painting is the vibrant electric blue of the velvet tablecloth partially covering the marble top, and rising up to the iris at the top of the pyramid on which the bouquet is been composed, consisting of various flowers such as roses, peonies, anemones, tulips, daffodils, hyacinths and others.

All the elements of the ensemble participate in the creation of a festive vision of natural magnificence. However, the beholder is also invited the beholder to reflect, more bitterly, on transience, by the presence of the clock, a symbol of the ineluctable passing of time, and some of the flowers which are already withered, bent and too open, indicating the temporariness of beauty.

Van Aelst's dazzling skill in painting still lifes of flowers had a significant influence on the creation of the only important still life by Florentine Carlo Dolci (Vase of flowers), also commissioned by Prince Cardinal Giovan Carlo de' Medici, who was as passionate about art as he was about botany.