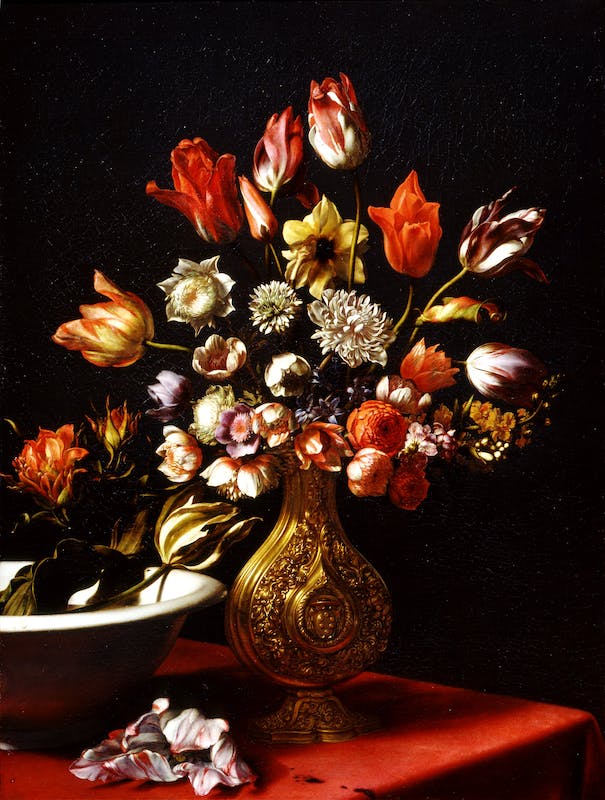 The painting depicts a splendid bouquet of rare and different flowers contained in a gilded vase, decorated with embossed plant motifs and with the Medici coat of arms surmounted by a cardinal's hat in the centre.

The vase rests on a surface covered with a soft red drape, to its left is a white porcelain bowl containing three tulips of particular botanical value. Between the vase and the bowl, on the edge of the shade is a faded tulip, almost an omen of time that leads everything to its inevitable corruption.

With this work, Carlo Dolci creates a true "portrait of flowers": all the varieties represented in the painting are not only real and perfectly described, but also caught in the moment of blossoming, that time of spring also referred to in the payment of the work, made on 23 May 1662.

Dolci's painting, one of the most extraordinary examples of Italian flower painting, combines an exceptional level of formal quality, an appeal to the spiritual values of 'meditation painting' and a precise and scrupulous pictorial description of the portrayed botanical species.

Commissioned by Cardinal Giovan Carlo de' Medici (1611-1663), the price paid for the canvas was sixty scudi in May 1662: a price that was considered at the time to be explicitly "extortionate" for a still life subject.

The reason for this extraordinary valuation was explained by the client himself, who wanted to reward the fact that the artist "...uses such diligence and finesse in his paintings that no greater could be desired...", as written in the certificate of payment. The quoted document highlights one of the distinctive features of Carlo Dolci's style, that slow and meditated work that was defined by the biographer Filippo Baldinucci as "practical diligence" and "patient practice", in which the artist became "wonderfully known" from his very beginnings and which contributes to making his painting particularly effective in the genre of "flower portraits".

Giovan Carlo de' Medici was one of the most active collectors of still life works in 17th-century Florence and a keen botanical connoisseur, a passion he followed by creating splendid gardens in which he selected and cultivated precious botanical rarities.