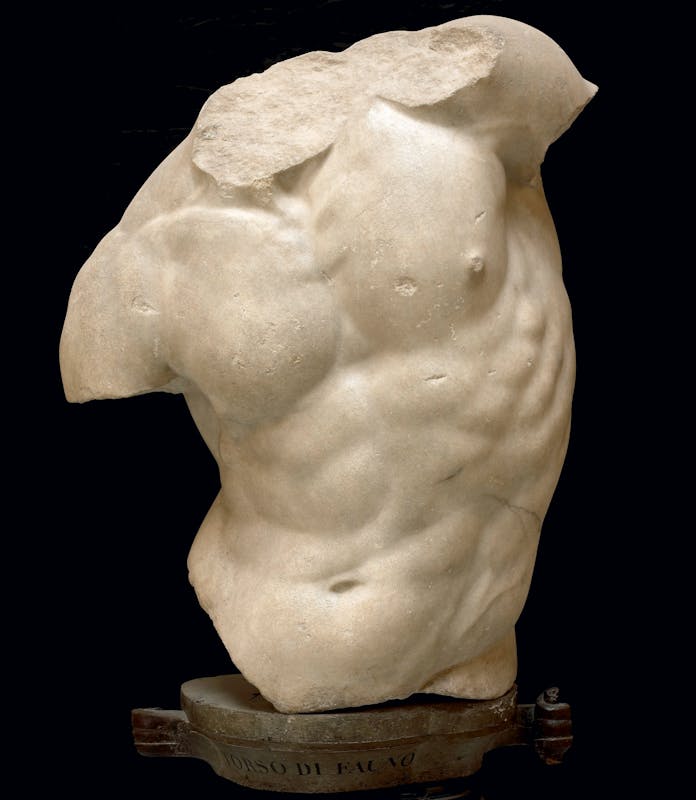 This robust torso was purchased in 1778 by Grand Duke of Tuscany Peter Leopold from the Gaddi collection, which was located in Florence; nothing is known of the work prior to this date, except that it was part of the above-mentioned private collection.

The statue is derived from a prototype of the 2nd century b. C. and, although only the torso is preserved, it is evident that it was originally a Centaur with hands bound behind its back. It was part of a group consisting of a young, free and exuberant Centaur, and an ancient one, being ridden by a cupid who strikes it with a whip. What remains of the torso tells us of a young, muscled body, whose energy seems to be constrained inside the limits of the material in which it is made: the strain in the twisted torso is visible in the sculpture. It can be easily interpreted as a metaphor for the invincible strength of Eros, even able to control the wild Centaurs; this symbol of strength and power was used several times as a model for different art forms, including painting, and especially in the period between the 16th and 17th centuries. An undeniable evidence of this is the “Adoration of the Shepherds” by Amico Aspertini, a refined oil painting on wood, dated 1515 and preserved at the Uffizi (Inv. 1890 no. 3803), where the torso is shown on the far left, resting on a marble base that is very similar to an altar.

One curious fact: unlike other sculptures, this work was never completed to restore its original appearance. It was considered such a high-quality artwork, so powerful in its emotional effect, that it was decided not to interfere with the extraordinary evocative power of the past.