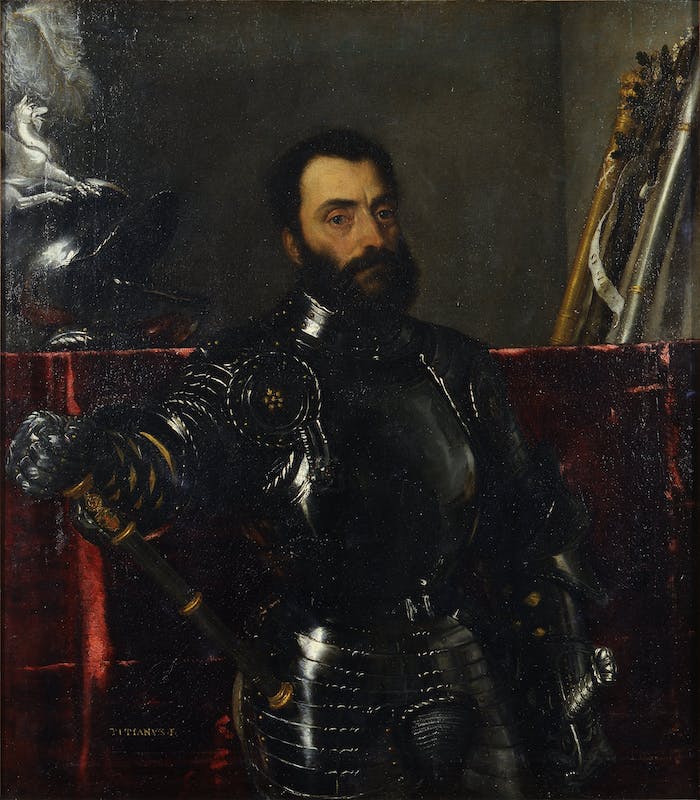 In the summer of 1536, the duke asked for the return of his parade armour, sent to Venice a few months beforehand so that Titian could reproduce it faithfully in the portrait that he was painting, making the most of the presence of the Duke of Urbino in Venice in his capacity as General Captain of the Serenissima.

Titian portrays Francesco Maria to mid thigh level, with his Venetian baton in his fist and wearing a polished suit of armour that stands out against a background of crimson velvet cloth. Under the armour, as can be seen from the sleeves, the Duke is wearing an outfit in black and yellow, the heraldic colours of the Montefeltro house, to remind us that he belongs to this family as the son of Giovanna da Montefeltro and the grandson of famous condottiere, Federico.

On the shelf behind him, to the left, is a helmet topped by a dragon, while on the right are the batons of command of the papacy, Florence, and Venice, with an oak branch in reference to the blood line of Francesco Maria and the house of della Rovere and its illustrious member, his uncle, Pope Julius II.

Together with the Portrait of Eleonora Gonzaga, his wife, painted as a companion to that of her husband, the portrait arrived in the Ducal Palace of Pesaro in the spring of 1538, but not before it had been admired by Pietro Aretino.  The excellent artistry of the paintings was declaimed by Aretino in two sonnets that reinforced the depictions of the duke and duchess, making them even clearer examples of complementary virtues, conveyed by Titian in his paintings. The expression on the duke’s face, together with his pose are obvious reflections of the moral qualities of a great condottiere: courage, pride, wisdom and honour. The painting is therefore one of the most successful examples of Titian’s skills as a portrait artist of great importance, destined to pass effigies of the “world’s powerful” down through the centuries.