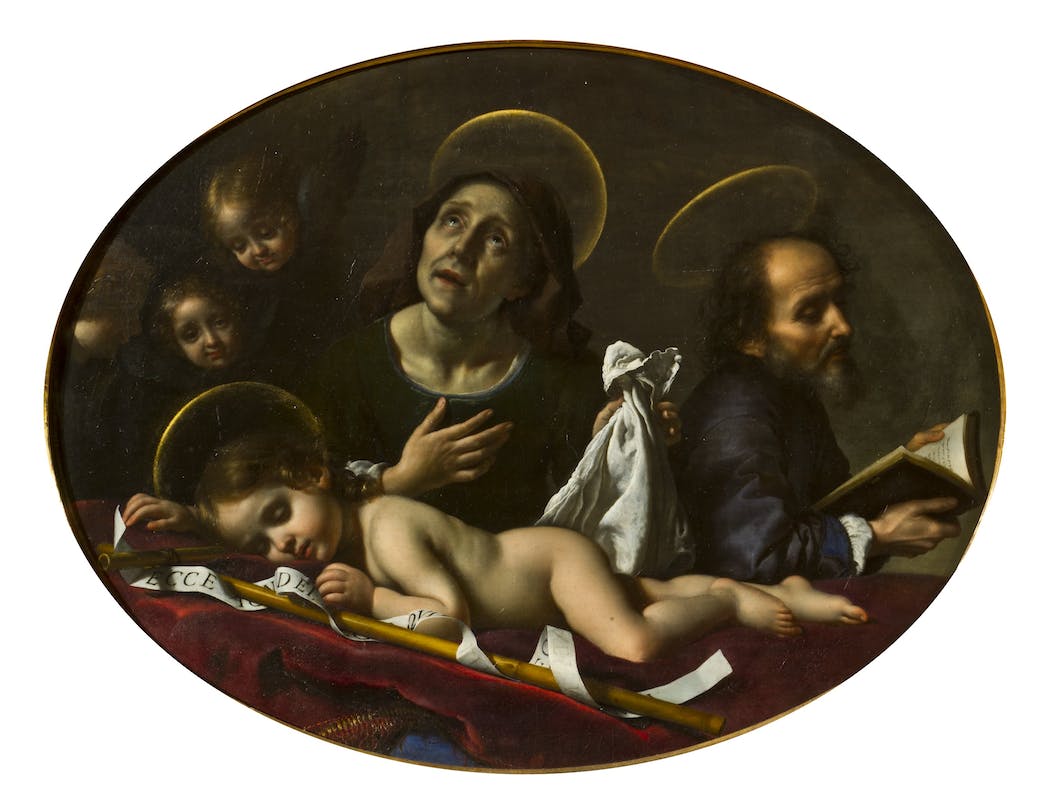 This oval piece, with its exceptional pictorial quality, was painted for Vittoria della Rovere, wife of Ferdinando II de’ Medici. The Grand Duchess was a great admirer of the painter and owned more than thirty of his works, which she continued to purchase after his death. Filippo Baldinucci mentions that the painting was intended for the Villa of Poggio Imperiale, her favorite home, where it was placed in the “room of paintings with windows overlooking the secret garden,” or rather, in a room that once contained fifty or so paintings by the most important artists of the early 16th century and by Florentine painters who were Dolci’s contemporaries. The iconographic subject of the naked child, resting on a red velvet blanket in the foreground is taken from the ancient statues of Eros sleeping and of Hermaphrodite, a subject interpreted here in a religious context. St Elisabeth, shown behind her child, is looking to the heavens, while Zechariah is immersed in reading a holy text. Their positions allude to the story of the Baptist and his dramatic end, foreshadowed from the time of his birth. The blood red velvet evokes the beheading of John, while the rush cross with phylactery and the inscription, “ecce agnus dei” are symbols of his role as the precursor of Christ. The subject has also been linked to the late motherhood of Vittoria, who gave birth to Francesco Maria, future cardinal and passionate art collector, in 1660.

The painting was restored by the Opificio delle Pietre Dure in 2015, and has regained the whole range of subtle colors and techniques so typical of Dolci’s style at its peak, and well described by sources. The beam of white light enters the scene from the left, spreading slowly over the surfaces, pointing to every variation in skin tone - Elisabeth’s bruised thin skin which contrasts with the firm, pink skin of the child, emphasizing the tactile consistency of the fabric, from velvet with covering of gold thread on the trim, accompanies and reveals the gentle,  restrained emotions of the protagonists.