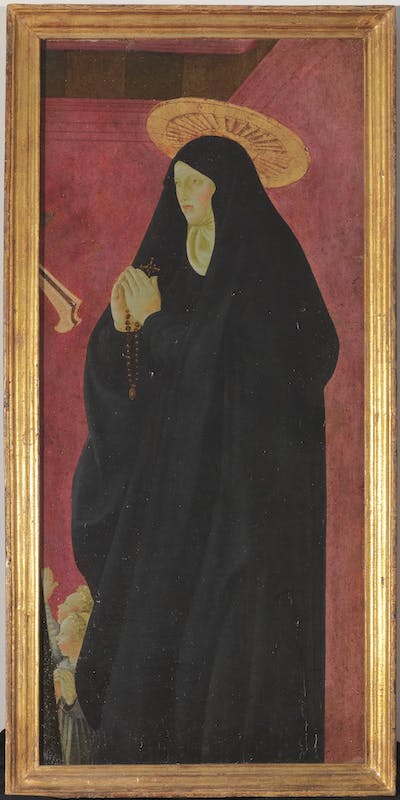 This fragment is all that remains of a composition showing what is perhaps Mary and Child, surrounded by various saints, a subject known as the Holy Conversation. The holy theme was set within an architecture where it is possible to see the perspective flight of the architrave above. The saint is usually thought to be Monica (331-387), mother of the philosopher and theologist, St Augustine who, through her love and prayers, converted to Christianity. Her black robes, together with the white wimple that covers her head and neck, are like those of a nun, but they were also usually worn by widows, as Monica was. The worship of this saint increased notably in Italy after the moving of her remains from Ostia to Rome in 1430. Monica is holding a small cross, a circulum precatorium, a string of beads used when praying. At her feet, two children are praying with their hands together. The object on the left may be the handle of a musical instrument held by an angel, or a fragment of the attribute identifying another saint, perhaps the knife with which St Peter Martyr (1202-1252) was killed. The dark robe, a part of which can be seen in the bottom left side, may perhaps be identified with the iconography of St Peter Martyr, a Dominican friar.

Although the altarpiece is now just a fragment, it is possible to appreciate the scenic layout of the composition created by Paolo Uccello, master in the use of perspective and leading light of Renaissance painting in Florence and northeastern Italy. The skill of the artist is evident in the painting of the halo, similar to a solid gold plate, seen from below. The loose clothing worn by the saint highlights the monumentality of her figure, shaped by the light that caresses her pale skin.

As part of the Contini Bonacossi collection and protected by law as a work of cultural interest, the painting was purchased by the State in 2002, using the right of pre-emption.