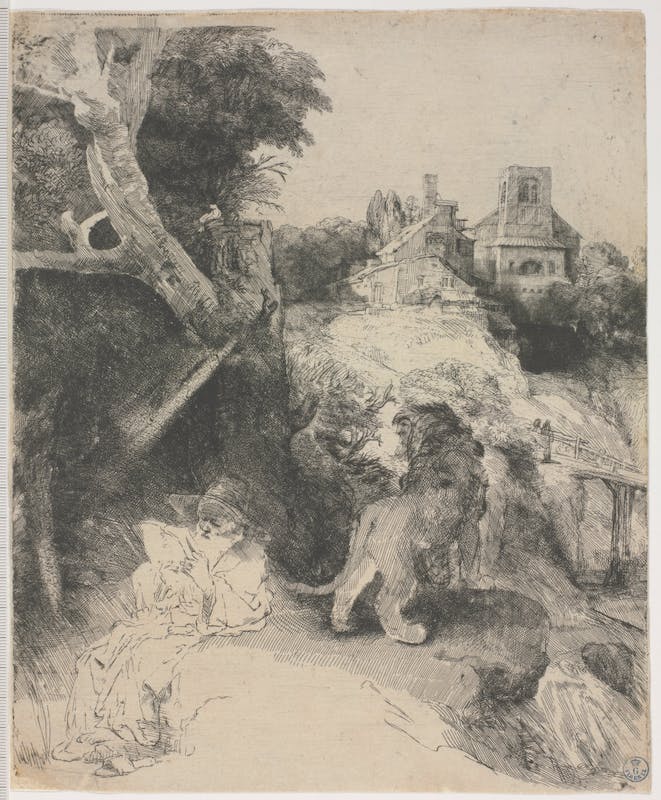 Rembrandt had a wealth of knowledge about the history of engraving and often took inspiration from the old Italian masters, copying the prints of Mantegna and studying late Renaissance drawings, echoes of which can sometimes be found in his works. In this St Jerome Reading in an Italian Landscape, also described as “in the manner of Dürer”, the compositional sources are recognisable at first glance: from the rustic buildings, taken from drawings by Giulio and Domenico Campagnola, to the general layout of the scene, immersed as it is in a soft, harmonious atmosphere, reminiscent of Titian’s landscapes from which Rembrandt takes the serene balance.

The openly unfinished nature of the figures in the foreground, which are there, as if burned by a dazzling light, contributes to the fascinating appearance of an image that has nothing supernatural but rather, which emphasises the everyday peace of the old saint, absorbed in his reading. If Rembrandt seeks to achieve a balanced construction with every means, following the models of the ancient masters, then his universe, however is still a long way from that of the Renaissance. Rembrandt does not idealise shapes, he recreates what he can take from their sources, transferring them into the objective reality of everyday living. This occurs thanks to a prodigious technique that is able to convey the cool shade offered by the moving fronds, the suspended atmosphere of the countryside under the bright light, and the tenseness of the animal, attracted by the travellers crossing the bridge in the distance.