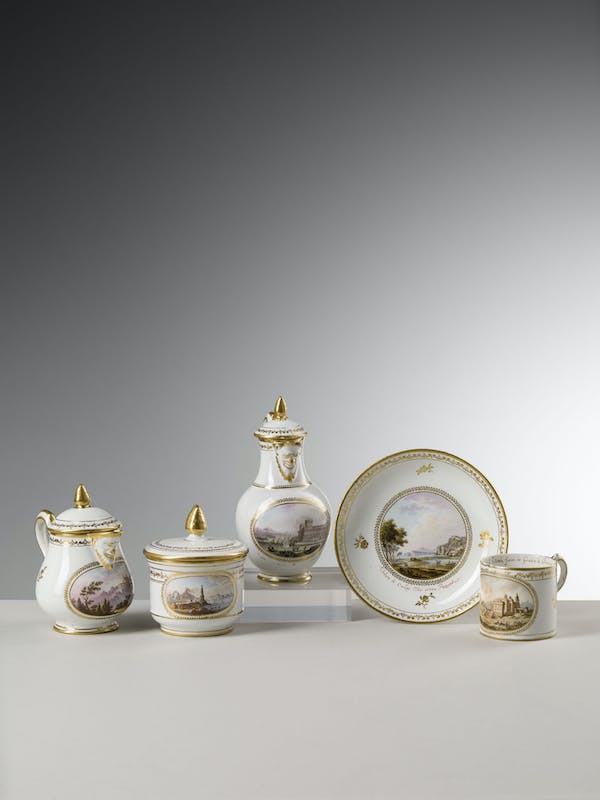 New documentary revelations have made it possible to clarify how some artefacts came to be in the porcelain collection of Palazzo Pitti. One example is this exquisite breakfast service intended for a single person and therefore called solitaire. It is made up of a coffee pot, a sugar bowl, a pot-bellied milk jug with lid and a small cup and saucer.

It is characterised by its so-called "a vedute" decoration, where the most striking panoramas of the Kingdom of the Two Sicilies are depicted with great precision, described in the detailed captions that accompany them, such as, for example: the Campi Elisi (saucer) in Pozzuoli, or the Church of San Vitale (cup), the square of Santo Spirito and the Lanterna del Molo (sugar bowl) in Naples.

This service therefore falls within the genre of production defined as 'souvenirs' which was very popular in Europe in the 1780s and 1790s, also thanks to the appreciation of the Grand Tour travellers, who loved to keep the memory of the places they had visited alive through images that evoked them. In order to ensure the location was accurately reproduced, the decorators would copy the engravings in the printed repertories, such as the plates of Il Voyage Pittoresque de l'Abbé de Saint Non (Paris 1781-1786).

An exchange of correspondence in 1785 between the decorator Ferdinando Ammannati and the sculptor Giuseppe Bruschi, both of whom were active, albeit at different times, in the Real Fabbrica Ferdinandea and in the Manifattura Ginori, provides information on the porcelain gifted by the Neapolitan sovereigns during their trip to Florence, including our déjeuner: "[...] we paint night and day and even during the holidays, and on this solemn day of the Annunciation, we are also working on the Great Commissions gifted to their Majesties the Queen and King, consisting of four breakfast services [...], and a coffee service with views of Naples".

Although this type of decoration was very common, we can see that it was still in its infancy in Naples in 1785 and that the marking of our service with the crowned monogram "FRF" in red can be traced back to the period when the Neapolitan manufactory was managed by Domenico Venuti, who produced a type of "Florentine-style" porcelain, as also indicated in the above-mentioned letters, whose production ceased in 1788.