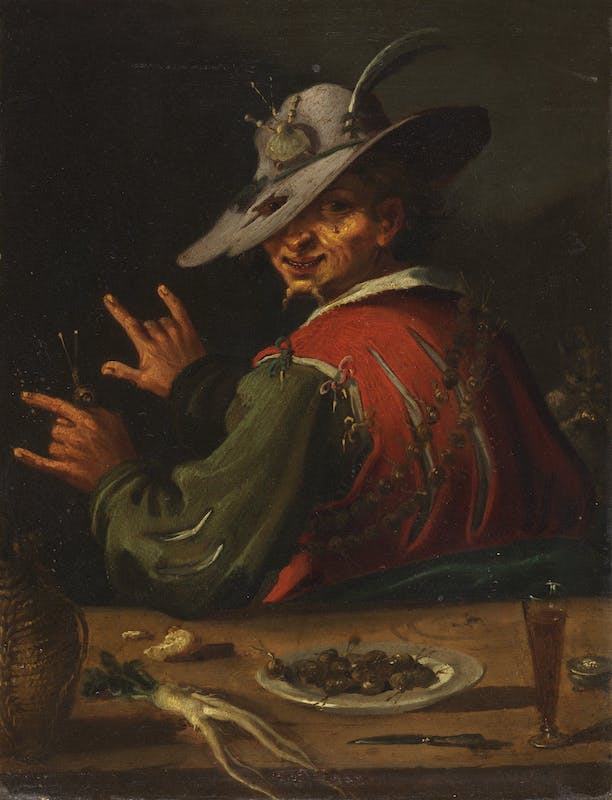 The small painting on copper, often referred to as 'The Snail Seller', depicts a young man seated at a table with rustic and improvised table settings.

On the table we recognise a morsel of bread, a trifurcated root (perhaps a mandrake), a stuffed wine flask, a conical goblet filled with wine, a small knife and a small box that could be a salt shaker. In the centre, a ceramic plate contains snails, small molluscs whose antennae protrude from their shells. The young man, turned three-quarters, raised his hands in the scaramantic and well-wishing gesture of the horns.

This motif is amplified and repeated in the many details of the curious painting: the forked shape of the snails' antennae scattered on the plate and on the boy's back, the laces that tie the red jacket to the sleeves, the unusual decoration with the shell on the felt hat, the root on the bare wooden table all recall the sign. Even the protagonist's stubble is forked, insisting on the horn motif. On the right, in the shadows of the background, a cat can be glimpsed, also a symbol of magic and esotericism.

Perhaps the unusual painting was an auspicious and subtly humorous gift to the Grand Duke Cosimo II or perhaps 'the snail seller' refers to a character from the rustic and burlesque literature of Tuscany in the early 17th century; it certainly has a pictorial quality and a humorous spirit that make it a bizarre, unusual masterpiece. In ancient inventories the painting was even indicated as a work by Caravaggio. In more recent times it has been associated to a large drawing in the Uffizi Department of Prints and Drawings (n. 5803 S) depicting the same subject, albeit with some small variations, and linked to Jacques Callot, the French engraver who lived and worked in Florence during the reign of Cosimo II. In 1978 Marco Chiarini referred the painting to Filippo Angeli, an artist of Neapolitan and Roman training who, called to Florence by the Grand Duke Cosimo II in 1617, came into contact with the French Callot, active in the Grand Ducal city during the same period.