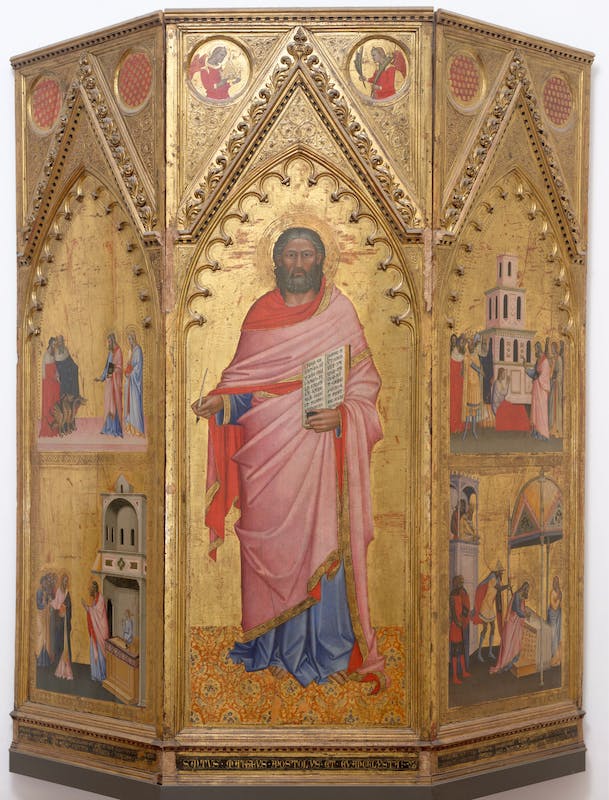 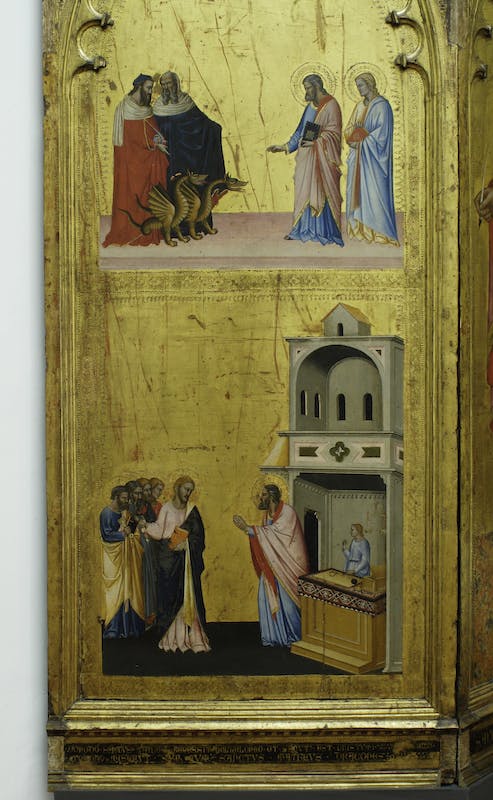 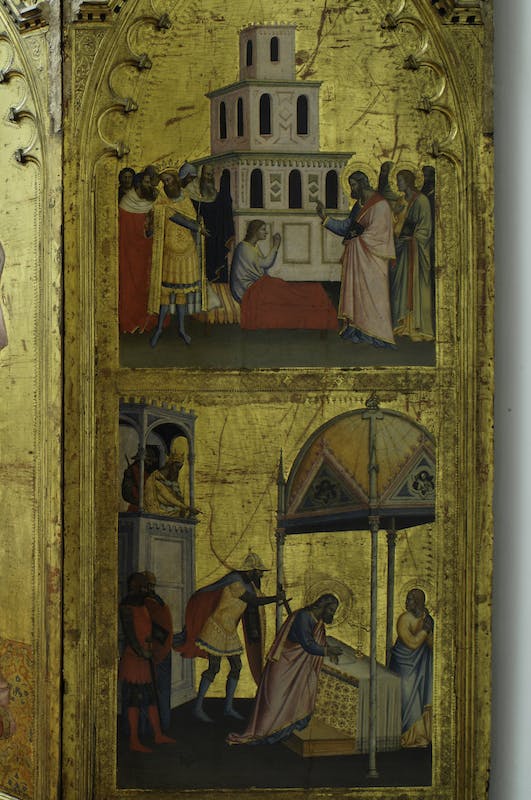 The unique form of this panel is due to the use for which it was originally intended: it was commissioned to adorn the pillar of the Church of Orsammichele in Florence, assigned to the Guild of Moneychangers. With its convex structure and three panels that, together, form a semi-hexagon, it was designed to embrace the pillar on three sides, telling the story of the life of Saint Matthew, patron saint of the Guild of Moneychangers.  Matthew, apostle and evangelist, who, before Christ’s calling, had been a tax collector and was known as Levi, due precisely to his original job of levying taxes, was and still is the protector of bankers, customs officers, financiers, money-changers, accountants, business consultants and tax collectors.

In the Medieval, as is well known, the Guilds governed the organisation of all work in Florence, also financing many works of art that they then maintained and restored.

The three panels of Orsammichele were commissioned to Andrea di Cione, better known as Orcagna, painter, sculptor and architect, and the owner of one of the most famous and flourishing workshops in the capital city of Tuscany in the period following the plague in 1348. The consuls of the Guild appointed Orcagna to do the painting on 15 July, 1367, but a year later he became very ill - in fact, he would die on 25 August, 1368- and so he left the task of completing it to his younger brother Jacopo. Jacopo promptly took over the reins of the task, relying on a series of collaborators identified by the critics based on their styles, using set names. They agreed that this work was completed by the so-called Master of the altar-step of the Ashmolean Museum, named after the altar-step, preserved in the aforesaid museum.

The central panel portrays St Matthew with Gospel, feather and quill, dressed in a loose pink cloak with a red lining and trimmed with gold, over a light blue tunic. He is standing on a richly decorated rug featuring patterns that can also be found in the textiles depicted in other works by Orcagna. The two side panels depict four episodes in the life of the Saint, which should be read in different directions: on the left from bottom to top and on the right vice versa. The descriptions of the scenes appear at the bottom of the panel on which they are depicted. Starting from the left, facing the work head on, they read, in medieval Latin: QUOMODO. SANTUS. MATHEUS. DECESSIT. DE. CHELONEO. ET. SECUTUS. EST. CRISTUM, (Vocation of St Matthew); QUOMODO. MISERŨT. SUP. EUM. SANCTUS. MATHEUS. DRACONES (St Matthew tames the two dragons of Vadabar), on the right, QUOMODO. SANCTUS. MATHEUS. RESUSCITAVIT. UNUM. MORTUUM (St Matthew raises the son of King Egippus) and QUOMODO. SANCTUS. MATHEUS. FUIT. ACCISUS (Martyrdom of St Matthew). Under the image of the saint SANTHUS MATHEUS. APOSTOLUS. ET. EVANGELISTA, and in the book, the beginning of his Gospel. The episodes are related concisely using a palette of bright colours and with a close focus on the architectures, which are all highly imaginative and probably designed in this way to articulate the distribution of the figures within the space.

The panels end in a linear moulding and contain a sort of niche with pointed arches and poly-lobed setting that frames the image of the Saint and the two settings for the stories on the sides. At the top, in the cut-out portions above the figure of St Matthew, there are two small tondos with the busts of angels, respectively holding the Gospel and the palm of martyrdom, while identical tondos decorate the other two panels and are filled with golden coins on a red background, the symbol of the Guild of Money-changers.

After 1402, when orders were given to remove all the panels on the pillars in Orsammichele, the work was moved to a series of different locations: first it went to the old St Matthew Hospital, which was said to have been founded by Lemmo Balducci, then, before 1791 it was moved to the Arcispedale di Santa Maria Nuova. It was purchased in 1899 by the Uffizi Gallery, and exhibited there from 1901 onwards.