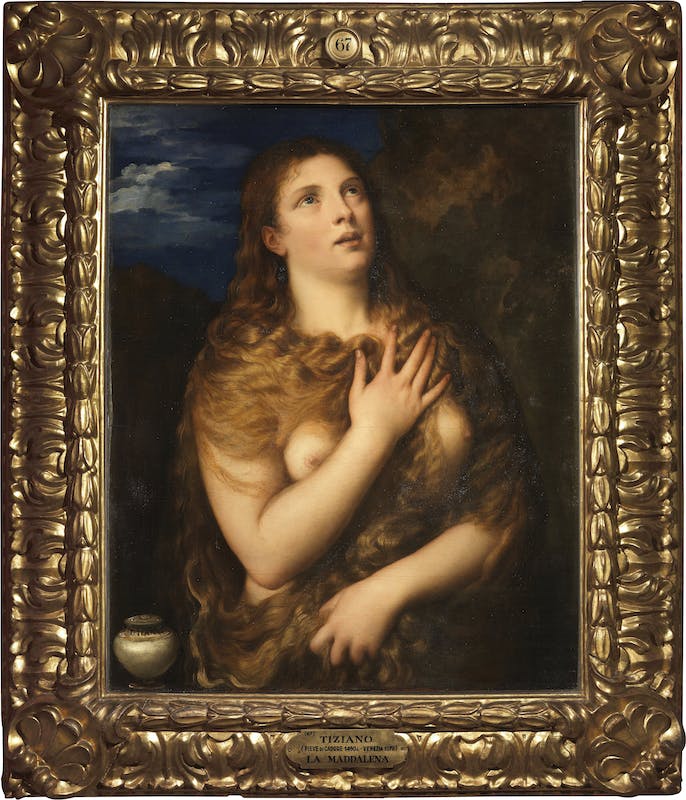 “TITIANUS” on the rim of the opening on the vase, bottom left.

The painting is of a penitent Mary Magdalene, as often copied by Titian during his lengthy career, using an iconography destined to become very successful on account of the unusual, bold erotic fascination that bursts out of the female nude of the saint, looking up to the heavens in an act of worship. Titian’s Mary Magdalene is a penitent prostitute, a woman with a dissolute past who, according to the Gospels (Luke 7, 36-50), came to the house of Simon the Pharisee to ask Jesus for forgiveness, weeping penitent tears on the feet of Christ, which she then dried with her hair and scented with precious unguent from the jar on which Titian placed his own signature. It is a figure that is packed with femininity, portrayed by Titian using thick, concentrated brushstrokes and warm tones, highlighting the eyes, soaked in crystalline tears, and the marvellous cloak of copper blonde hair that covers her bare breasts - she is naked due to her resolve to strip herself bare of her past. For this image, with its persistent idea of sinner and penitent, Titian may have used a Venetian courtesan as his model, as there were many in the 16th century who, having repented and converted, could use Titian’s famous painting as their own example, such was its popularity that it was widely copied by the artist and by his workshop.

This version in the Palatine Gallery may be one of Titian’s oldest prototypes, due to the astounding quality of the painting, and it was probably painted by the artist for Francesco Maria della Rovere, Duke of Urbino, in Venice between 1533 and 1535. The oldest mention of the painting dates back to Giorgio Vasari, who on seeing it in the collection of Duke Guidubaldo della Rovere, during a visit to the court of Urbino in 1548, noted it as a “rare thing”. It was brought to Florence as part of the inheritance of Vittoria della Rovere in 1631.