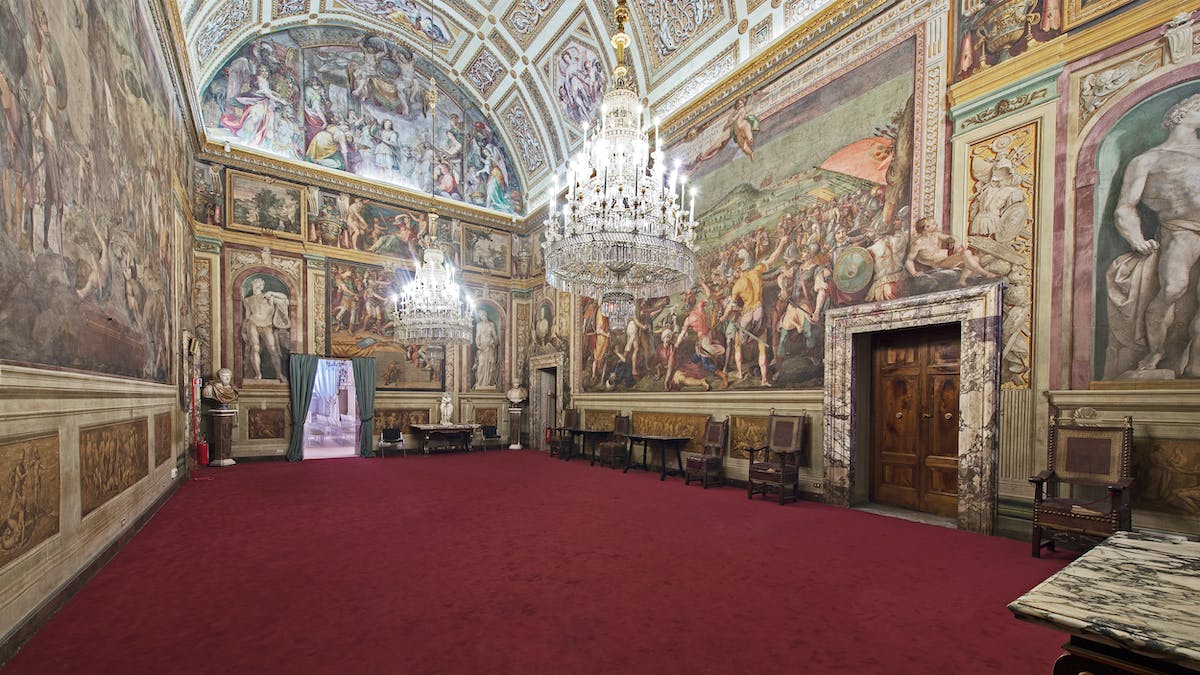 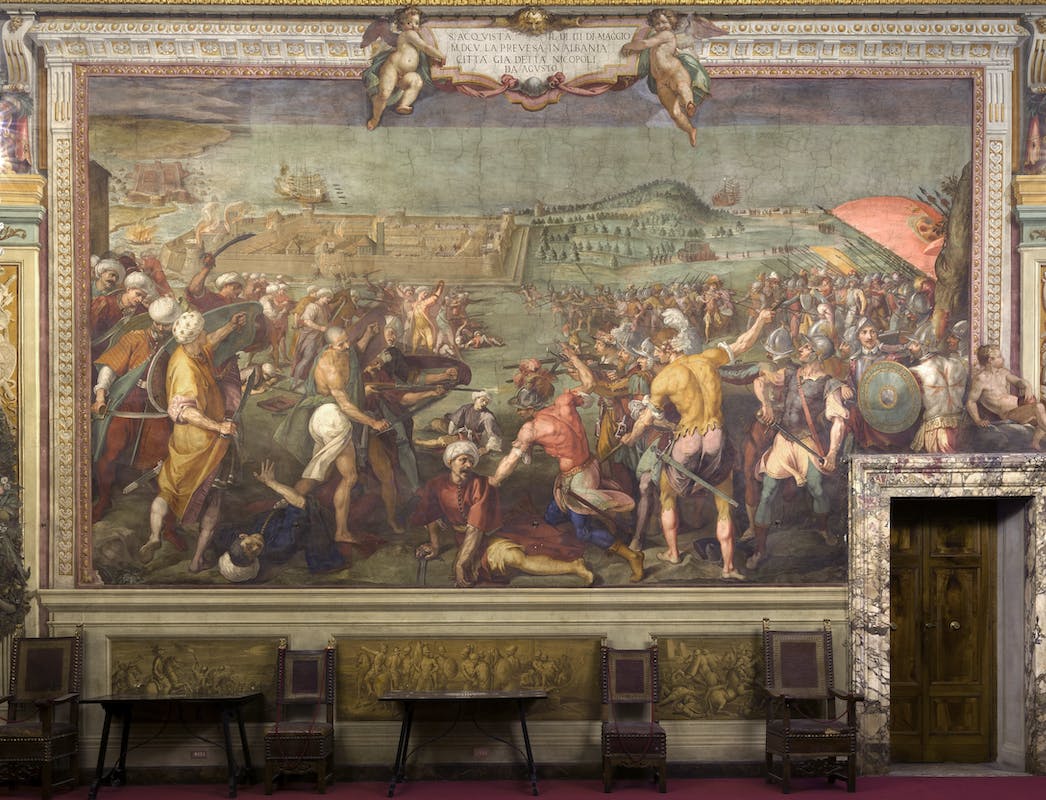 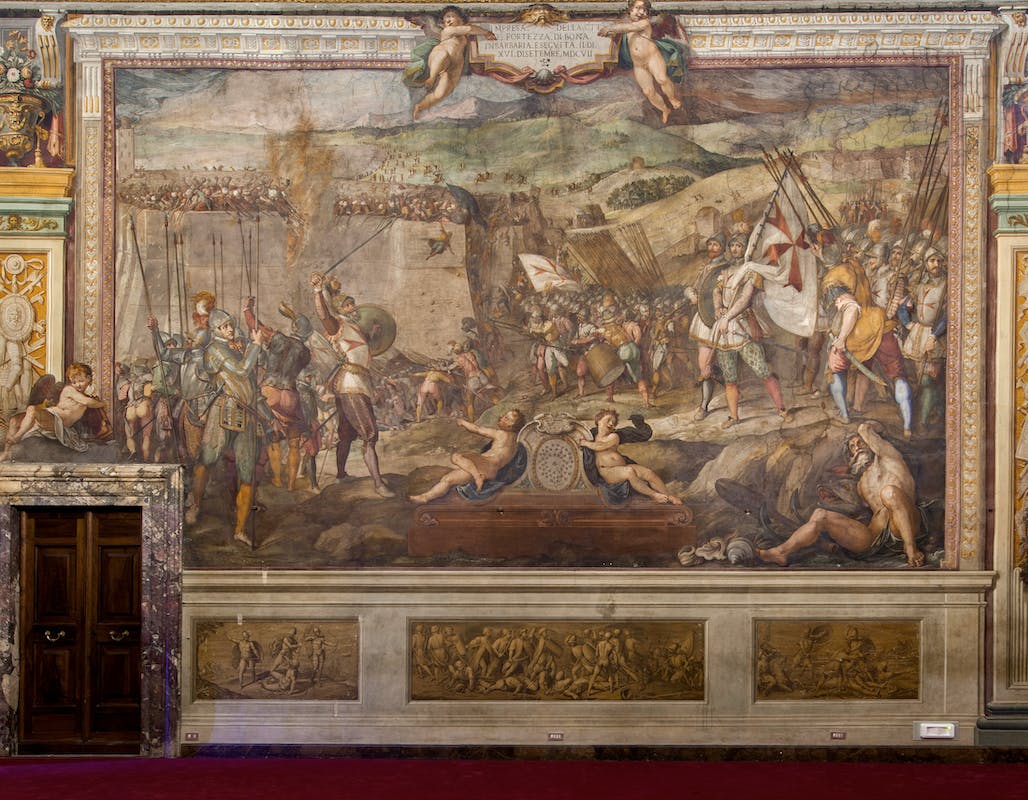 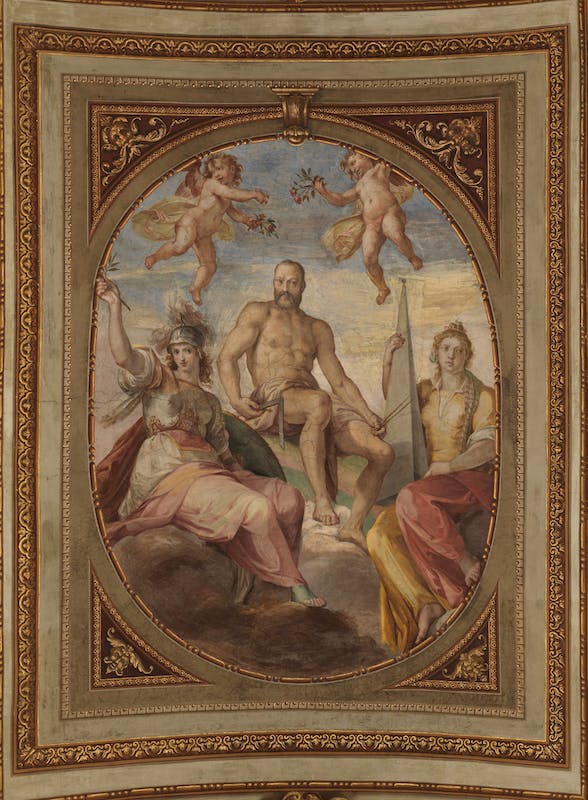 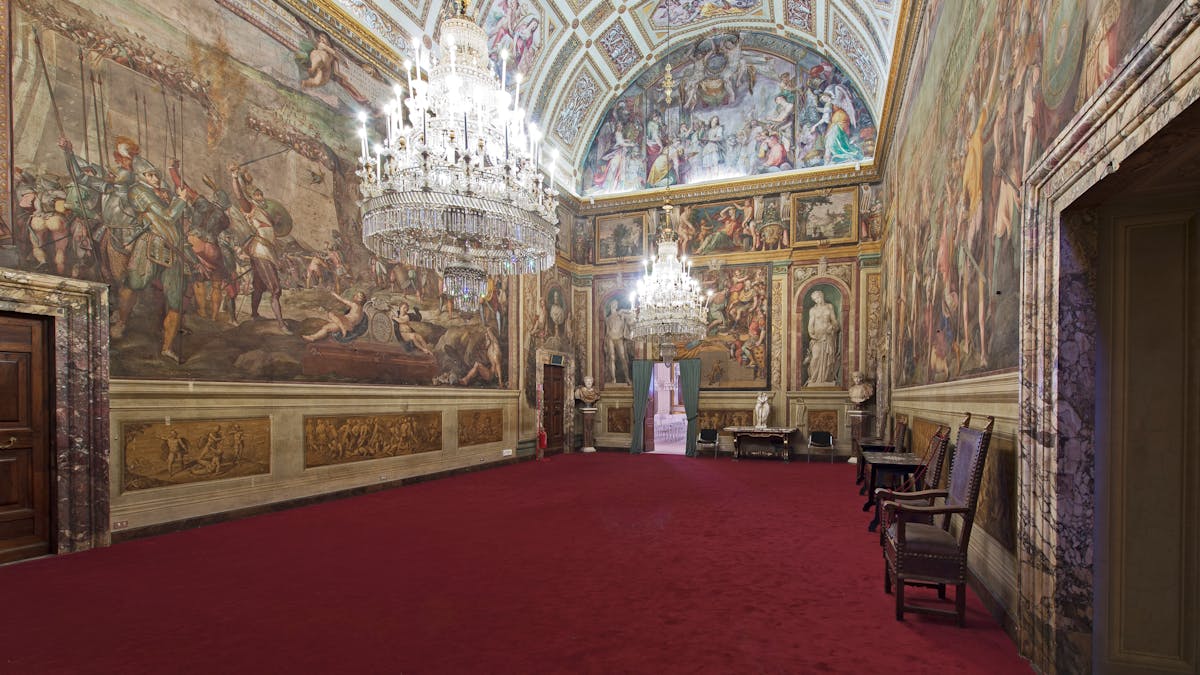 Conservation
2018-2022, by Opificio delle pietre dure of Florence. Thanks to Amici degli Uffizi and Friends of the Uffizi Galleries, Veronica Atkins

A magnificent view of the ‘Hall of Bona’, one of the most sumptuous rooms of the Palatine Gallery and one of the first ones to be frescoed in Pitti Palace at the beginning of the 1600s, when it used to be the main hall of the so-called "Apartment of Foreign Princes". Grand Duke Ferdinando I de’ Medici commissioned Bernardino Poccetti to decorate this Hall thus carrying out an authentic political and cultural manifesto for his reign, which took as example the spectacular ‘Hall of the 500’ in Palazzo Vecchio realized under the commission of his father Cosimo I.

The center of the ceiling hosts the core of the Medici family’s celebration: six allegorical female figures represent the virtues of the good prince (Liberality, Glory, Wisdom/Knowledge, Supervision/Command, Mercy and Celebrity/Good Reputation) that are surrounding an oval with Cosimo I with Minerva and Princes’ Glory. The Duke is naked as an ancient Jupiter, with a compass and a setsquare as symbols of the “builder” of the State of Tuscany, according to the platonic idea of the “Prince Architect”.

Particularly, the frescoes on the walls celebrate Ferdinando’s military efforts to expand the Grand Duchy of Tuscany and represent the military campaigns of the Knights of Saint Stephen (an order established by Cosimo), against the Turks: the conquering of the Fortress of Prevesa in Albany upon the Ionian Sea (modern-day Ionian Greece) and that of Bona in Algeria. On the short walls some allegorical figures represent Tirreno Sea and River Arno, along with a view of the Port of Livorno (a strategic place which has always allowed the prosperity of the Grand Duchy) and Ferdinando I himself receiving prisoners and the war booty.

The fresco ensemble is included into a rich and elaborated decoration with allegorical scenes and grotesques, trophies on the pillars and flowers composition, landscapes and monochromatic scenes representing ancient statues inside the niches.

The  restoration of the frescoes took four years to be accomplished (2018-1022). It was made possible by the generous support of the Amici degli Uffizi and Friends of the Uffizi Galleries: the author of the very generous donation, US philanthropist Veronica Atkins