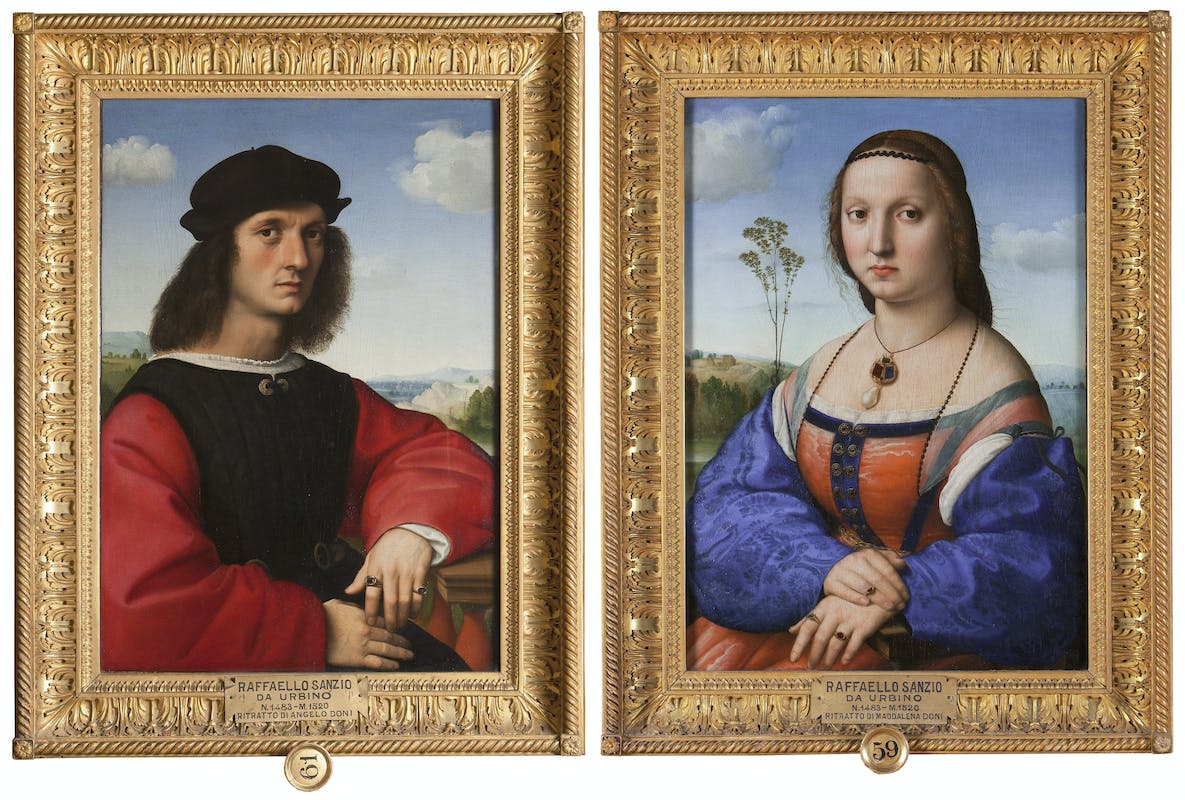 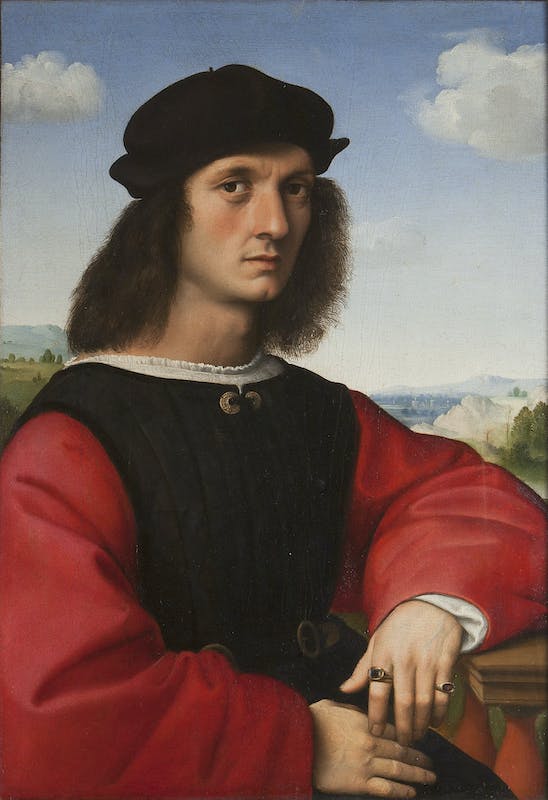 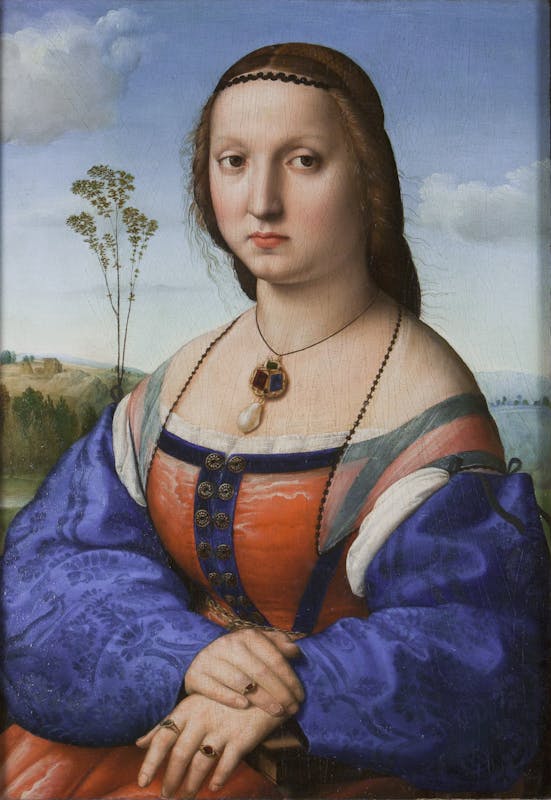 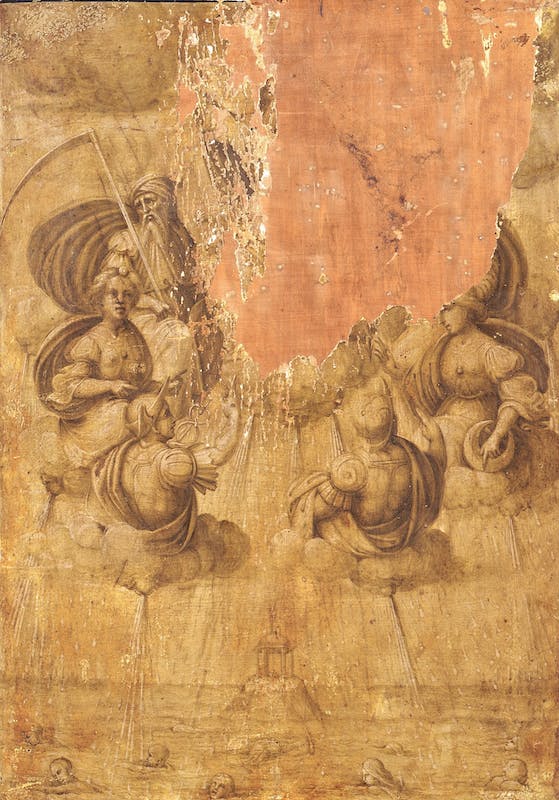 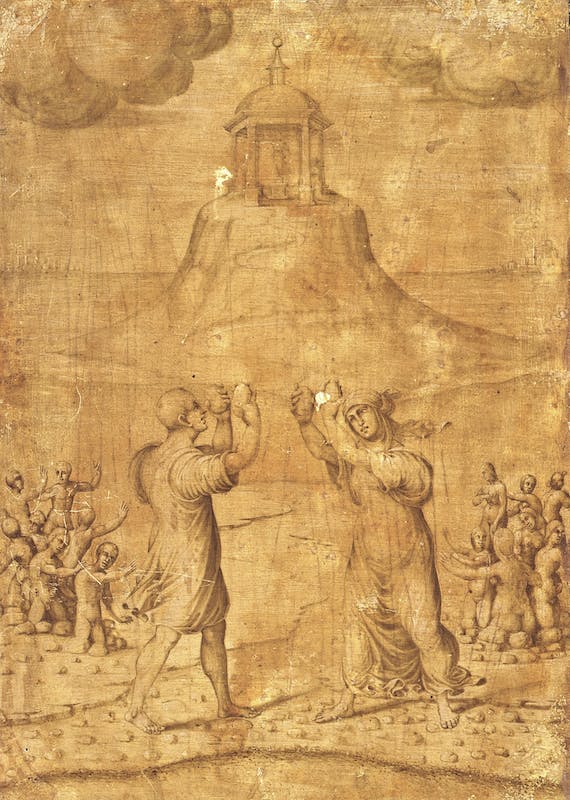 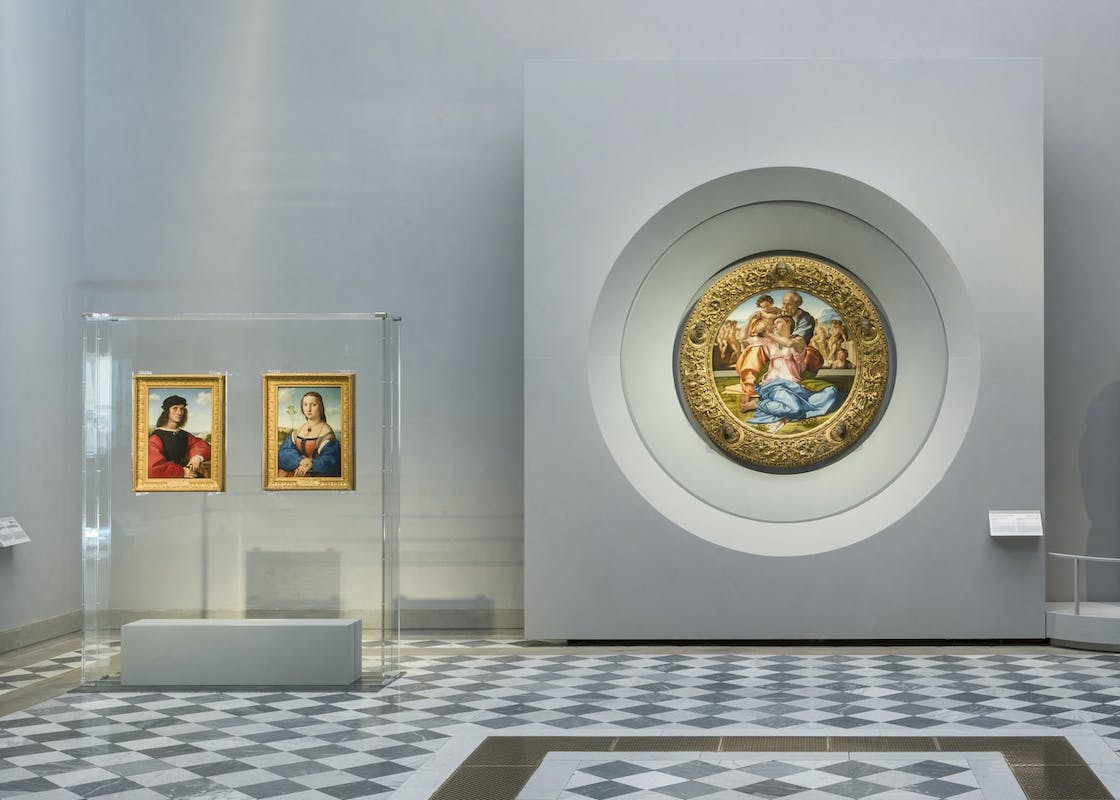 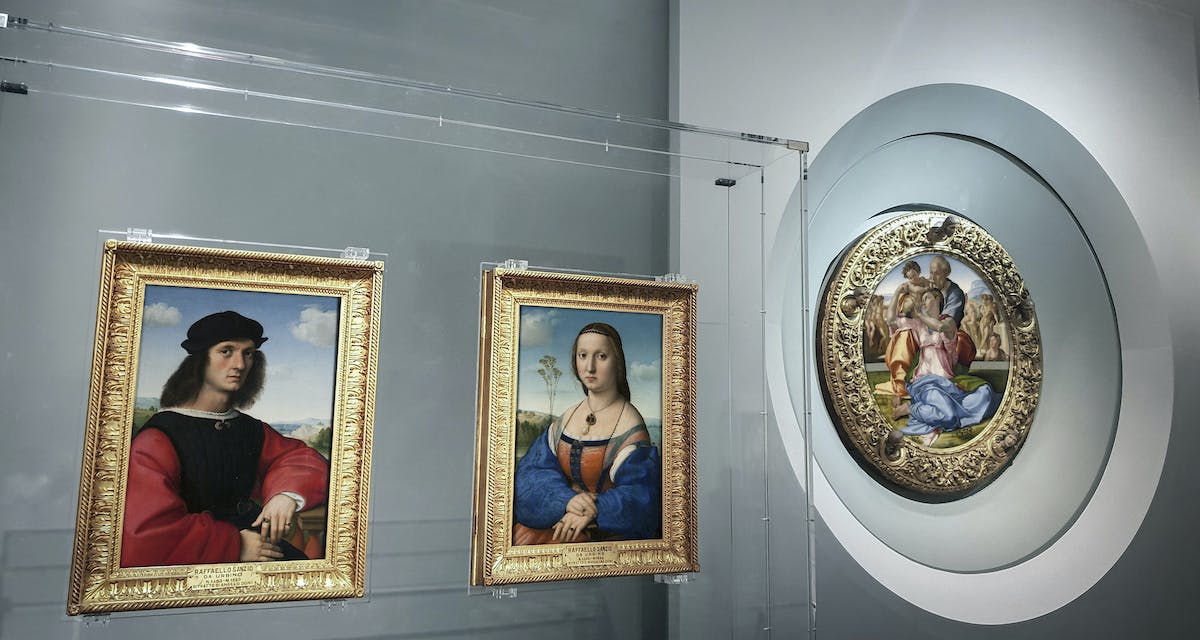 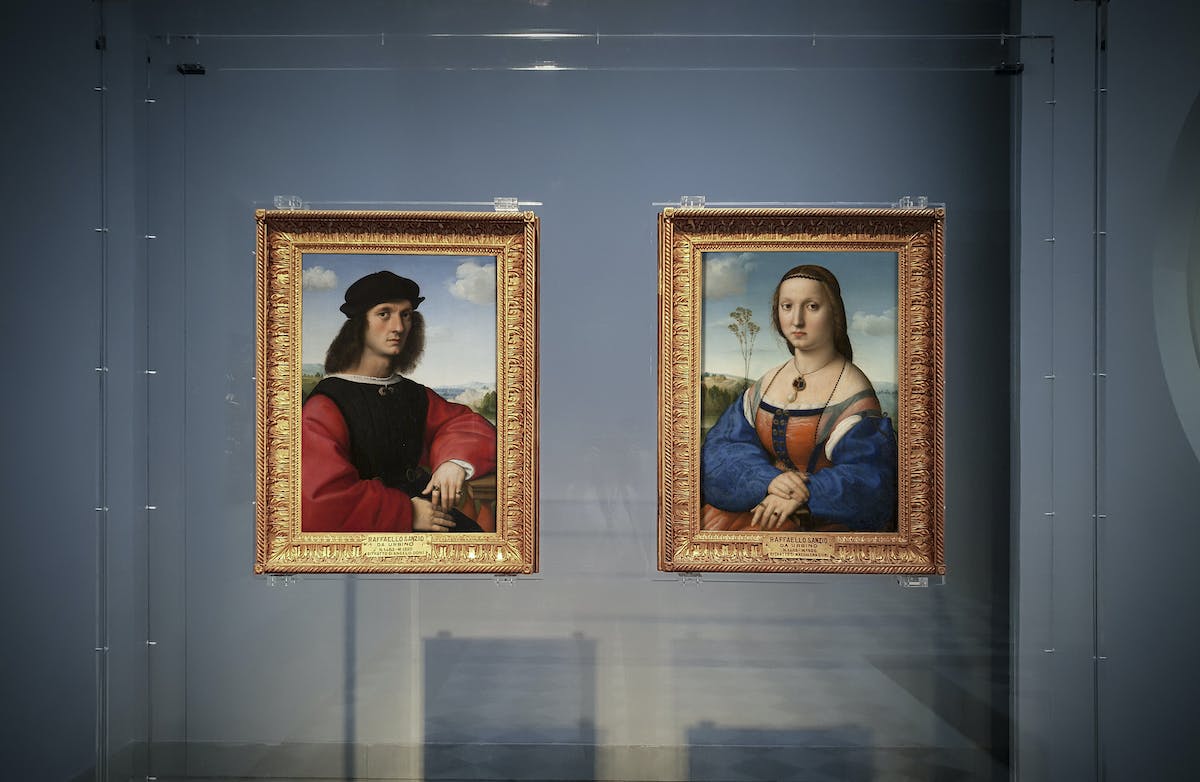 The two paintings portray Agnolo Doni (1474-1539), a rich fabric merchant and prominent figure among the Florentine upper class, and his wife, noblewoman Maddalena Strozzi (1489-1540), who married on 31 January 1504. According to Giorgio Vasari (Le Vite, Edizione Giuntina 1568) the works were commissioned to Raphael by Agnolo: “Whilst he was living in Florence, Agnolo Doni, who was very careful with his money in other things but willing to spend it, although still with the greatest possible economy - on works of painting and sculpture, in which he much delighted, asked him [Raphael] to make portraits of himself and of his wife; these may be seen in the possession of Giovan Battista, his son, in the beautiful and most comfortable house of Agnolo, on Corso de’ Tintori, near the Canto degli Alberti, in Florence.” Agnolo also commissioned the round painting of the Holy Family, known as the Tondo Doni, to Michelangelo Buonarroti. Both portraits were painted en pendant and originally formed a diptych, held together by hinges that made it possible to look at the scenes painted on the backs. These are two episodes, one a consequence of the other, taken from Ovid’s Metamorphoses: The Flood, on the back of Agnolo’s portrait, and the following rebirth of humanity thanks to Deucalion and Pyrrha, on the back of the portrait of Maddalena. These stories, painted in monochrome, were the work of a colleague of the young Raphael, whose identity remains anonymous but who is thought to be the so-called Maestro di Serumido, a figure identified by Federico Zeri, who attributed a group of works in similar style to this same artist. The choice to paint the works in black and white reflects a taste for the Flemish styles that were popular in 15th- and 16th-century Florence, where the panels of diptychs and triptychs would traditionally have monochrome decorations on the back. The two scenes are to be interpreted as allegories that seem to wish fertility to the marriage. Ovid narrates how the gods allowed Deucalion and Pyrrha, an elderly couple without children to save themselves from the flood and to restore life to mankind after it. On the order of Zeus, the pair threw stones over their shoulders, and once they touched the oil, the stones became people – the ones thrown by Deucalion became men and the ones thrown by Pyrrha, women. These references strengthen the theory, put forward by the majority of critics, that the portraits were commissioned for the marriage of the young couple, dating them to somewhere between 1504 and 1506, the year in which the furniture for the Donis’ marriage chamber was completed by Francesco del Tasso and Morto da Feltre.

The first of the portraits by Raphael was that of Maddalena: radiographic analysis has shown that he made changes to background, initially conceived to be an interior, so that it overlooked a landscape through a side opening, while the portrait of Agnolo was directly inserted into the landscape, creating visual continuity with that of his bride. These two masterpieces mark an essential stage not only in Raphael’s art, but also in the tradition of Florentine portraiture which, by developing solutions previously formulated by Verrocchio in the Woman with Flowers, and by Leonardo in the Mona Lisa, come to a new natural style of half-bust presentation. The links to the Mona Lisa are so close as to lead one to think that Raphael was himself able to study it in Florence, at least towards the end of 1504. Raphael distances himself from Leonardo’s model by preferring to use a solid, clear approach to space, lowering the horizon behind the figures and bringing them strongly to the foreground, according to models influenced by his own teacher, Pietro Perugino and by the Flemish painters of the late 15th century, such as Hans Memling. The fascinating use of the sfumato technique, as seen on the Mona Lisa has been replaced by an absolutely clear use of shape and colour, by a descriptive language that pauses on the detailed portrayal of the faces, fabrics and jewels. Maddalena’s pendant is particularly significant, formed by a gold, unicorn-shaped mount and three precious stones (ruby, emerald and sapphire), and by a pearl, an element that alludes to virginal purity and marital fidelity.

In Vasari’s period, the portraits were still in the family home in Corso Tintori, where they were seen by Raffaello Borghini (1584) and Giovanni Cinelli (1667). From this date, there is not much information about them. They most definitely remained with the Doni family if, in 1826,  Leopold II Grand Duke of Tuscany was able to buy them from the heirs and add them to the collection of paintings he was creating in the Palatine Gallery in Palazzo Pitti. Since 5 June 2018, the Doni portraits have been displayed in the Uffizi Galleries alongside Michelangelo’s Tondo Doni, hung on new supports that allow the stories on their reverse sides to be admired.

Silvia Malaguzzi - The jewels in the paintings of the Uffizi

The Doni Spouses by Raphael

Video in Italian. A tribute to the renowned spouses on their wedding anniversary officiated on 31st January 1504