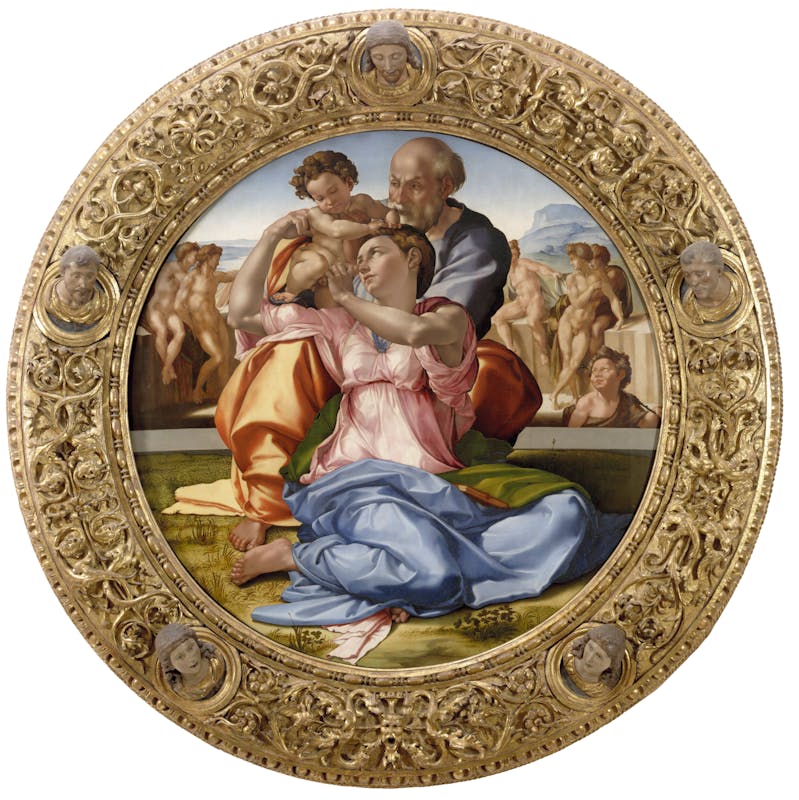 Michelangelo painted this Holy Family for a Florentine merchant, Agnolo Doni, whose prestigious marriage to Maddalena Strozzi in 1504 took place in a period that was crucial for early 16th-century Florentine art. The presence in the city of Leonardo, Michelangelo and Raphael together, boosted the already lively Florentine art scene, which in the first decade of the century experienced a period of great cultural fervour. Agnolo was thus able to celebrate his marriage and the birth of his first child with some of the highest expressions of this exceptional artistic period: a portrait of husband and wife painted by Raphael and the ‘tondo’ by Michelangelo, which is the only finished panel painting by the artist to survive. Michelangelo had not long studied the potential of the circular shape, which was greatly appreciated in the early Renaissance for religious decorations for the home, in the marble of the “Pitti Tondo” (Bargello National Museum) and the “Taddei Tondo” (Royal Academy of London): in both cases, the Virgin, Child and Infant St John powerfully occupy the whole surface of the relief. The “Doni Tondo” is also conceived as if it were a sculpture, in which the pyramidal composition of the group takes up almost the entire height and width of the panel. It has been noted that the compactness of the group is like the structure of a dome, albeit one that is animated on the inside by the twisting bodies and the concatenation of gestures as the Christ Child is gently passed from the hands of St Joseph to those of Mary. This composition, which is so articulated and expressive, comes from Michelangelo’s own knowledge and study of the great marble sculptures from the Hellenic Period (III-I century B. C.), with their outstanding coiled movements and high degree of expression, which were emerging from excavations of Roman villas. Some of these important finds, such as the Apollo of the Belvedere and the Laocoön excavated in January 1506, are promptly referred to in the painting, among the naked figures leaning against a balustrade (to the left and right of St Joseph). The presence of Laocoön made it possible to date the tondo to a period coinciding with the birth of Maria Doni (September 1507). The young nudes, whose identification is complex, seem to represent pagan humanity, separated from the Holy Family by a short wall that represents original sin, past which there is also an Infant St John, which would seem to refer to the interpretation of the painting as being for a christening.

The frame around the painting, probably designed by Michelangelo, was carved by Francesco del Tasso, an exponent of the highest level of the tradition of wood carving in Florence. It shows the head of Christ and those of four prophets, surrounded by grotesques  and racemes, in which there are half moons, hidden in the top left section: the emblem of the Strozzi family.

Michelangelo painted this Holy Family for a Florentine merchant, Agnolo Doni, whose prestigious marriage to Maddalena Strozzi in 1504 took place in...