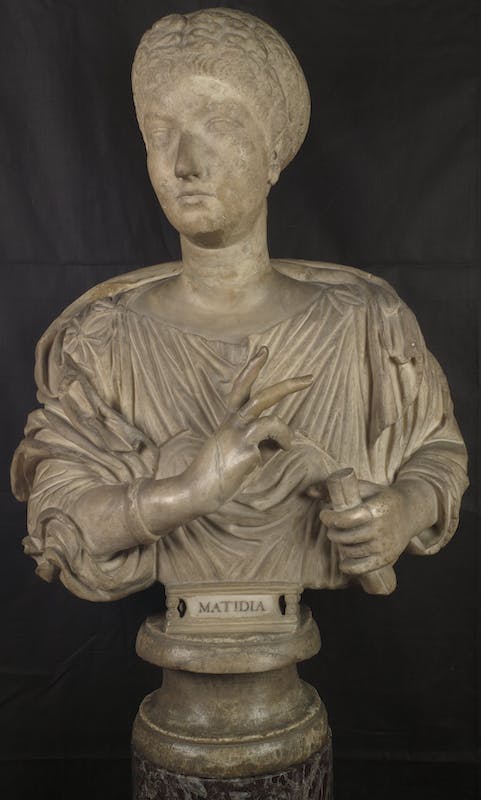 The portrait has been in the Gallery since 1704, even if a Matidia is mentioned in documents from the late 17th century. The head, turned slightly to the left, is a long female face, with almond-shaped eyes, lids raised, but pupils and irises not carved. On the forehead, the face is framed by a band of pressed hair, created with crescent incisions and topped by sinuous curls that partly conceal the bun behind it. Due to its similarity to a portrait from Proconsular Africa, it is now considered more correct to identify the face with that of the unfortunate Vibia Sabina, wife of emperor Hadrian, which would date it to 128-130 A.D. Sabina, celebrated by contemporaries for her beauty, was the niece of emperor Trajan, and married Hadrian in 100 A.D. to guarantee his claim to the throne with a blood tie to the ruling family. Although ancient sources stress on more than one occasion that the relationship between Hadrian and Sabina was very cold, the emperor never failed to celebrate his wife with tributes and public images. After her death, a little under a year before his own, Hadrian had her deified. The Florentine bust, which does not belong to the head, seems to be a later work: the style and type of dress would seem to date it to 250-300 A.D. Elements of the face (nose, lips and ears) are the result of later restoration, as is part of the bun on the head.