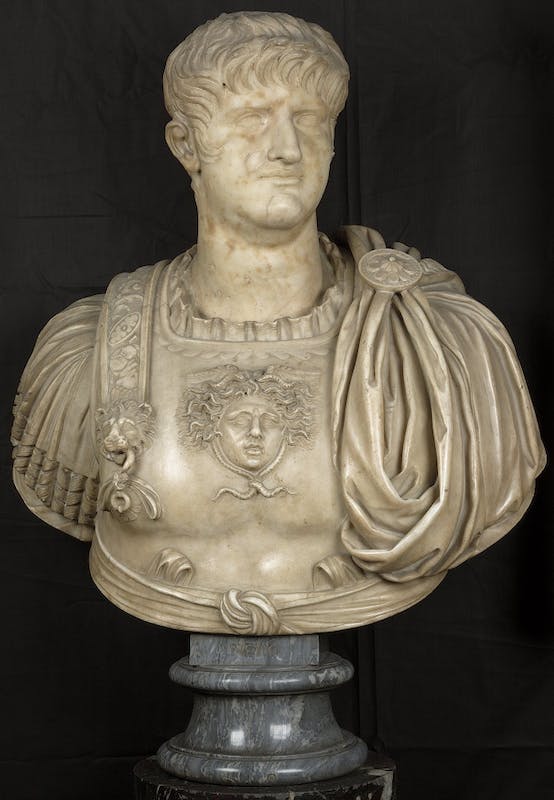 This piece probably came to Florence from the Ludovisi collection. The subject’s face, characterised by its fleshiness and set on a thick neck, reveals the features of the last and most controversial emperor from the Julio-Claudian dynasty, Nero, depicted here at 18, the age at which he took the throne (54 A.D.). His policies that were hostile to the Senate decreed the terrible judgement of him by historians of the period, creating the myth of the mad, tyrannical emperor destined to reach us today. In fact, many of the crimes attributed to Nero, such as the great fire of Rome, had nothing to do with him and even in the case of the bloody repression of the plots against him, such as the Pisonian conspiracy, Nero behaved no differently from many of his successors, for whom history has reserved a more benign memory. As it is know, the emperor suffered the damnatio memoriae after he was overthrown and committed suicide in 68 A.D. The inscriptions that commemorated his name and his effigies in public places were systematically removed and destroyed, making any complete portraits of Nero a rarity today. In the case of the Florentine head, too, it was believed to be an old fake, created from the model of a bust found on the Palatine hill in Rome and now at the Terme Museum. However, some critics are now more willing to recognise it as an ancient portrait of notable quality, placed on an armed bust, with insignia, made in the 1500s. In this case, there is no shortage of additions, applied around the ears, chin and nose.