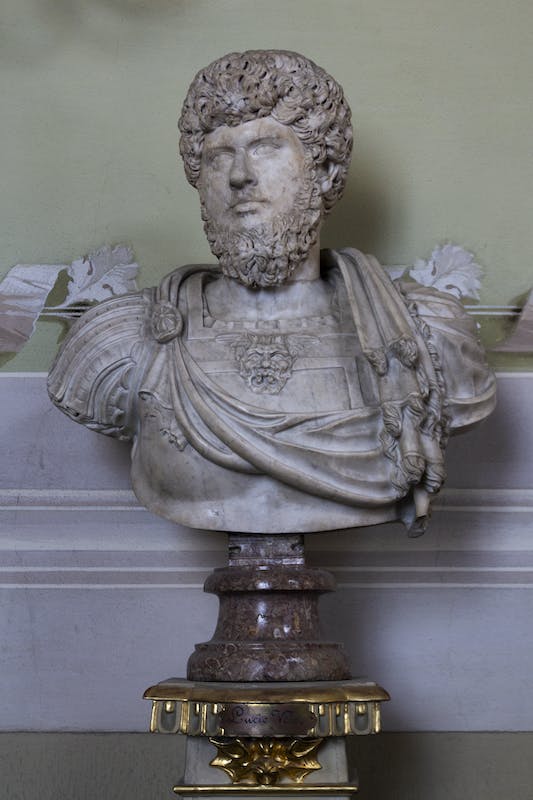 This head is placed on an armoured bust, created in the style of the late 16th century. It is the only ancient part - even with some modern additions, such as the nose, the curls over the centre of the forehead, the middle part of the beard and the ear lobes - and portrays Lucius Verus, adopted brother of Marcus Aurelius, and emperor with him from 161 until his death in 168, aged 39, just after the end of the victorious war with Parthia, and probably due to the plague contracted during his military campaigns along the border of the Danube.

His biography in the Historia augusta describes him as bright and brilliant, a lover of hunting and of the gymnasium. Thick, flowing locks surround his face like a lion’s mane, perfect for evoking a dynamic, passionate personality.

The Florentine head can be referred back to a group of copies of the 4th official portrait type of Lucius Verus. The number of copies of which we are aware means that we can say this was the most widespread type, probably from 160 A.D., when Verus was made consul.

Although they are attributed to the same model, the different copies have slight variations, due to the different sculpting techniques in the various parts of the empire: the example in Palazzo Pitti has a solidly-framed face and characteristic pupils created with a single drilled hole, meaning we can say that it is the work of Greek craftsmen in the late 2nd century A.D.