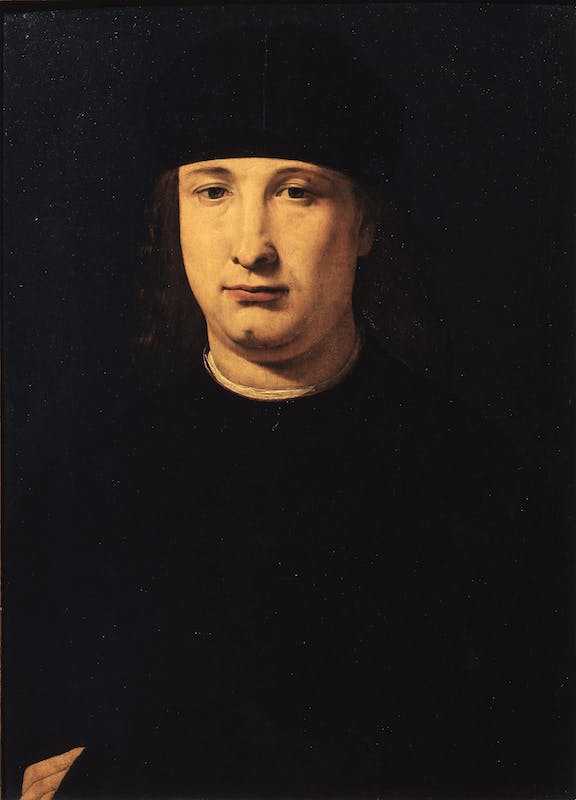 The painting is a half bust of a gentleman wearing a dark hat, which covers his forehead, and dark clothing, with the thin edge of a shirt visible underneath.The jacket lapel reads “CB”, the meaning of which is unknown. The man’s thoughtful face emerges from the dark clothing and background, contoured with light and depicted with lifelike features and a vivid psychological rendering.

The person depicted here has been identified as the poet Girolamo Pandolfi, better known as Casio (from the name of his Apennine hometown), who was a friend and customer of Boltraffio. However, the lack of specific attributes requires some caution, as the figure’s dark clothes are typical of a notable person or magistrate, suggesting that he was perhaps a man of law.

The painting, attributed to Giovanni Antonio Boltraffio in the 19th century, can be dated to quite late on in the painter’s career. A pupil of Leonardo, by this stage, Boltraffio had developed his own artistic style, moving away from emulating the work of his great teacher. The painting itself is dated to around 1500, when Boltraffio moved from Milan to Bologna, receiving important commissions from the Casio family.

This board became part of the Contini Bonacossi Collection after 1922, from the Frizzoni collection in Bergamo. It was previously in the collection of the Duke of Devonshire, at Chatsworth in England.