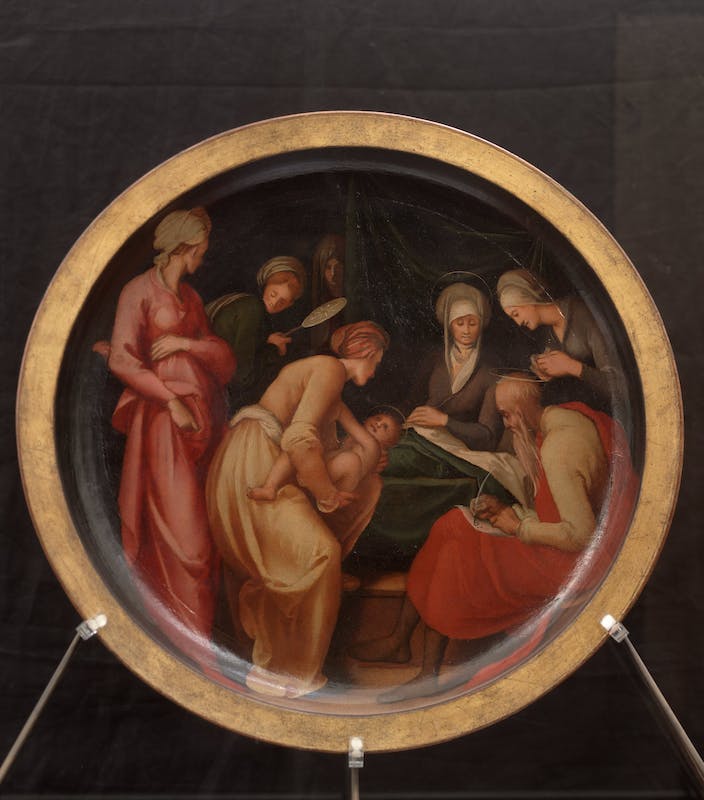 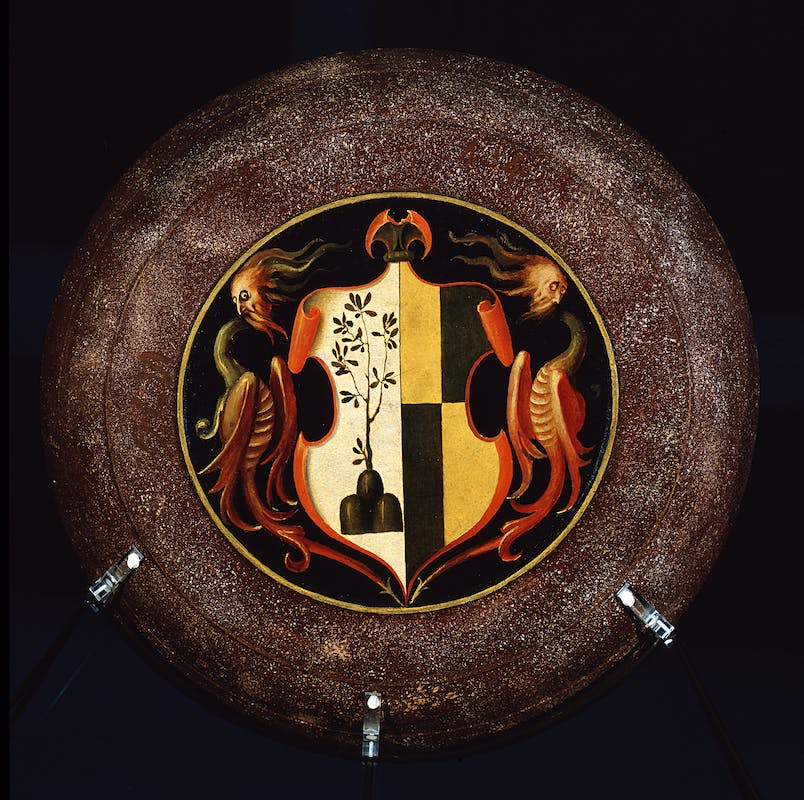 The birthing tray was a ceremonial object typically used in Tuscany in the 15th century. It was a large circular wooden tray used to serve meals to new mothers. The families of the more wealthy classes usually commissioned them to the most renowned workshops at the time, and they were also decorated by famous artists, who painted both sides with family coats of arms, religious episodes, allegorical figures or subjects taken from classic literature related to the theme of birth, or bearing good wishes for the newborn baby.

This birthing tray was painted by Pontormo for the birth of Alderighi della Casa, the first son of Girolamo della Casa and Lisabetta Tornaquinci, born in Florence on 15 January 1527.

Ritualistic objects like this were already obsolete at the time, but Pontormo, who had worked with master carpenters in Andrea del Sarto’s workshop on the decorations for the carnival carriages of 1513, would have had lots of time to try his hand at making something of this kind. In fact, by shaping it from a single piece of poplar wood, he was able to show off all his technical expertise in this field.

The front of the plate shows a shield with the spouses’ coats of arms, alongside two anthropomorphic grotesques, with extremely expressive weird, beaked faces. The painted frame, a perfect imitation of porphyry, is also admirable. The Birth of St John the Baptist is depicted on the back. In the centre of the scene, a maidservant is holding the newborn St John in her arms. The diagonal position directs the beholder’s gaze towards St Elizabeth, who has just given birth and is sitting on the bed, watching her husband Zachary write down the name he will decide on for their son. Other maidservants are bustling round the bed.

Even when working in the small space offered by the tray, Pontormo does not forgo the characteristic features of the painting style present in his large-scale works. In fact, the serious nature of the composition is reminiscent of his paintings for the Galluzzo Charter House, and his organisation of the characters in a circle in the undefined space of the room recalls the Supper in Emmaus. The characters’ facial features, the elongated shapes of their bodies and the styles of their clothing, are all clearly related to the northern figurative culture which had been the focus of Pontormo in those years.