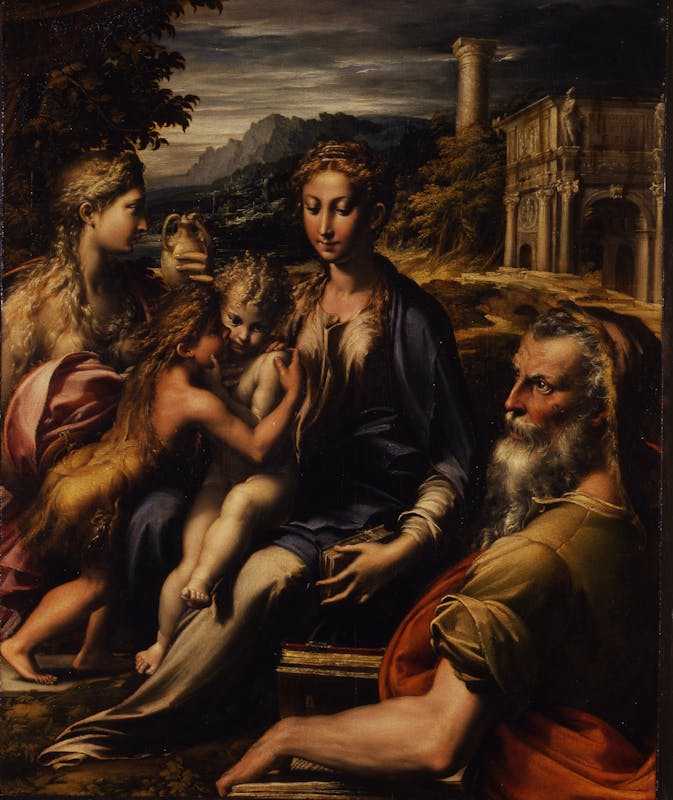 U PVER.PRO AN FACE DNI

Francesco Mazzola, also called Parmigianino, after Parma, his birth town, was an artist whose talent came to the fore from a very early age. He trained in direct contact with Correggio who, at the time, was painting the large cycles of frescoes in the churches of Parma. After completing his first commissions in Parma, he finished his training in Rome, where he studied the works of Michelangelo and Raphael. His intellectual, eccentric temperament drove him to develop an elegant, sophisticated, anti-classic style that made him the leading figure of Emilian Mannerism.

His Madonna with St Zachariah dates to the early 1530s, when the artist, who had fled after the Sack of Rome 1527, was staying in Bologna for a few years, focusing on an intense production of altarpieces and paintings for private devotion like this one, commissioned by Count Bonifacio Gozzadini from Bologna.

The painting is named after the saint portrayed in the foreground. The stern gaze of the priest, father of John the Baptist, guides the beholder towards the Virgin, who is sitting down with the Child in her arms. Baby Jesus, with his large languid, thoughtful eyes, is held tight by John the Baptist, whose tanned complexion is in stark contrast with the pale skin of the Messiah. John the Baptist is bending over to give his cousin a tender kiss, which he returns, caressing his cheek. On the left, a sensual Mary Magdalene, her breast barely concealed by her long blonde flowing hair, shows the vase of anointing oils, her traditional attribute.

In the background, an arch of triumph and a large spiral column appear, recollections of the artist’s stay in Rome, and symbols of paganism in ruins. However, the column could also be a reference to the incorruptible purity of the Virgin, sung about in the Marian hymn Collum tuum ut columna: “Your neck is like a column”, symbolism that the artist would further develop a few years later in his famous Madonna with the Long Neck.

The heavy book held by St Zachariah in his left arm may be the key to interpreting the meaning of the work, which refers to St John as the precursor of the Messiah. The powerful muscle structure of St Zachariah’s arm shows the influence of Michelangelo’s Roman frescoes. The fragmented wording visible on the book is indeed taken from a passage of Luke’s gospel (1:68) in which St Zachariah, when naming his son John, regains the power of speech and immediately recognises his son as a prophet: “And you, child, will be called the prophet of the Most High; for you will go before the Lord to prepare his ways”.

From a stylistic perspective, the painting is still influenced by Correggio, in terms of the tender gestures exchanged between Jesus and St John, and the poetic landscape in the background, but the serene gentleness that pervades the master’s work here gives way to a subtle sense of restlessness and a vague eroticism that give the holy scene an intangible mysterious vein, characteristic of many of Parmigianino’s works.