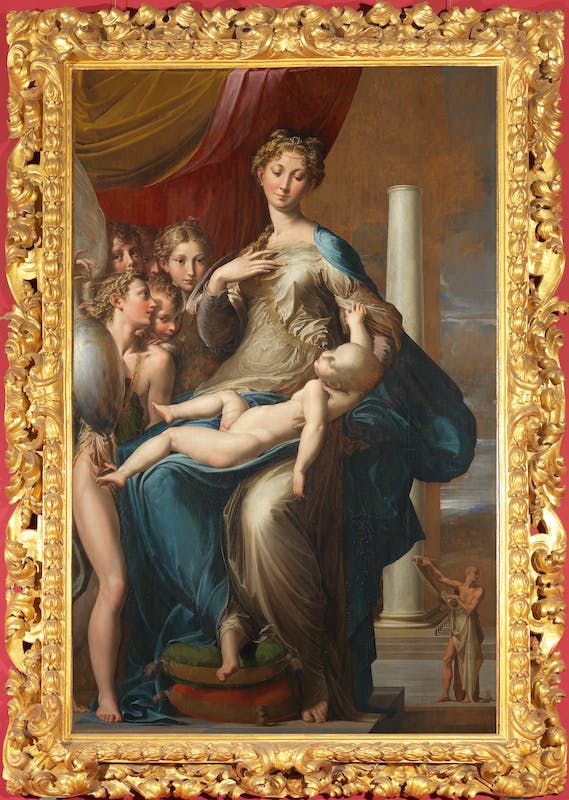 Francesco Mazzola, also called Parmigianino, after Parma, his birth town, was an artist whose talent came to the fore from a very early age. He trained in direct contact with Correggio who, at the time, was painting the large cycles of frescoes in the churches of Parma. After completing his first commissions in Parma, Parmigianino finished his training in Rome, where he studied the works of Michelangelo and Raphael. His intellectual, eccentric temperament drove him to develop an elegant, sophisticated, anti-classic style that made him the leading figure of Emilian Mannerism.

He was commissioned to paint the Madonna with the long neck in 1534 by Elena Baiardi Tagliaferri for the church of Santa Maria dei Servi in Parma. In the commissioning contract, the artist undertook to finish the painting in five months, but when he died in 1540, the altarpiece was in his study, still unfinished. Two years later, a decision was made to place it on the altar for which it had been destined, and the following inscription was added to the base of the column to justify its incomplete state: “Adverse destiny prevented Francesco Mazzola from Parma from completing this work”.

A Virgin with a statuesque figure reminiscent of Michelangelo, but with unnaturally elongated forms, contemplates the Divine Infant, who is asleep on her lap. The Child’s slumber prefigures his death on the cross, as the image of the Crucifixion is reflected in the urn that the angel is showing to the Virgin. The column on Mary’s left highlights the suppleness of her bust and neck, but it could also be a reference to the incorruptible purity of the Virgin sung about in the Marian hymn Collum tuum ut columna: “Your neck is like a column”.

The small figure at the bottom on the right is St Jerome, who is unrolling his scroll as he turns towards an unfinished figure, St Francis (the artist only had time to paint one of his feet). The presence of St Francis could be a reference to the dogma of the Immaculate Conception, the cult of which was diffused by the Franciscan order.

Although depicting a sacred theme, the artist does not forgo the typical sensuality of his artistic production: the figures with elongated limbs and refined poses, interpreted with sophisticated elegance, are permeated by a subtle eroticism, perceivable in the drapery clinging to the Virgin’s body, highlighting her curves, in the slender hand lifted to the breast, in the litheness of the naked leg of the young angel in the foreground.

Joining the Medici collections in 1698, the painting is part of an altarpiece that the Grand Prince Ferdinando had purchased to increase his collection of masterpieces from the Renaissance to the early 17th century. His letters convey his enthusiasm about owning the work, which he describes as “drawn as if by Raphael, finished with the soul but without pain and marvellously coloured”.