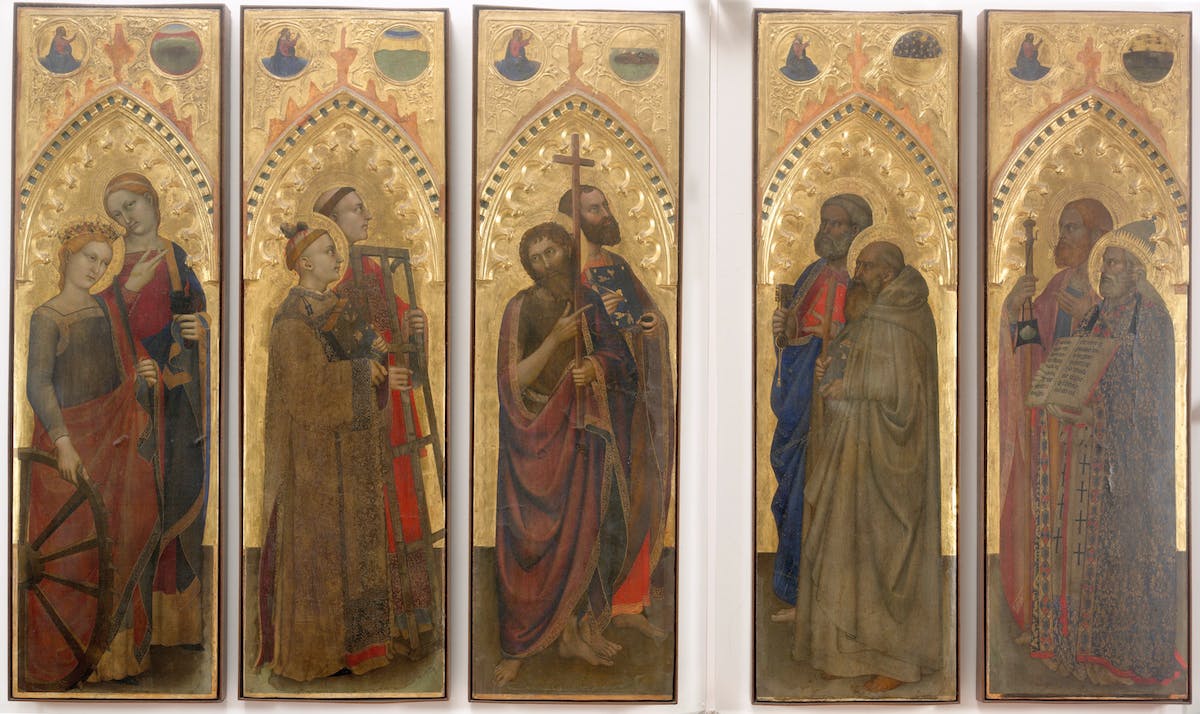 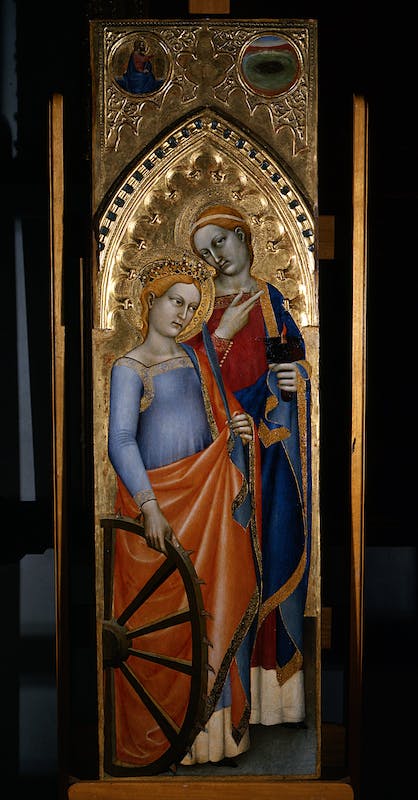 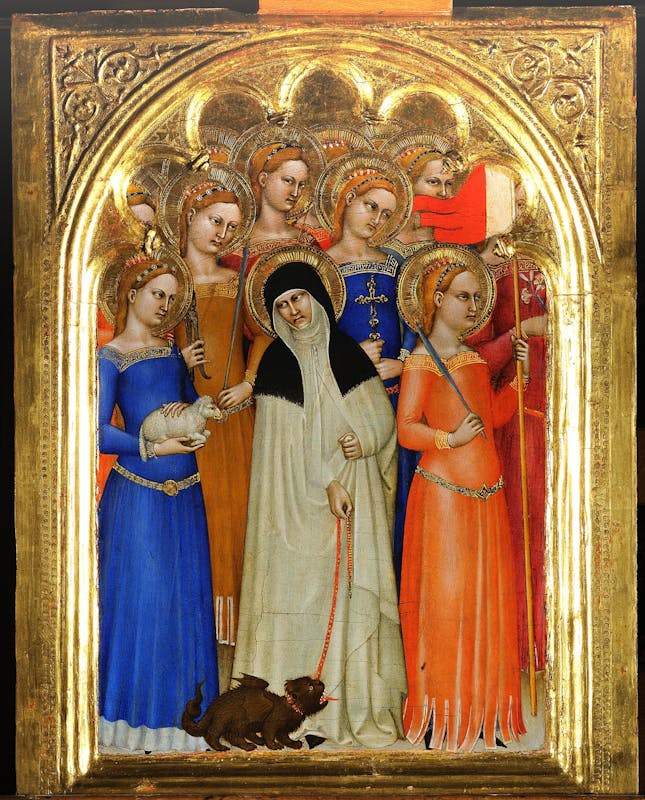 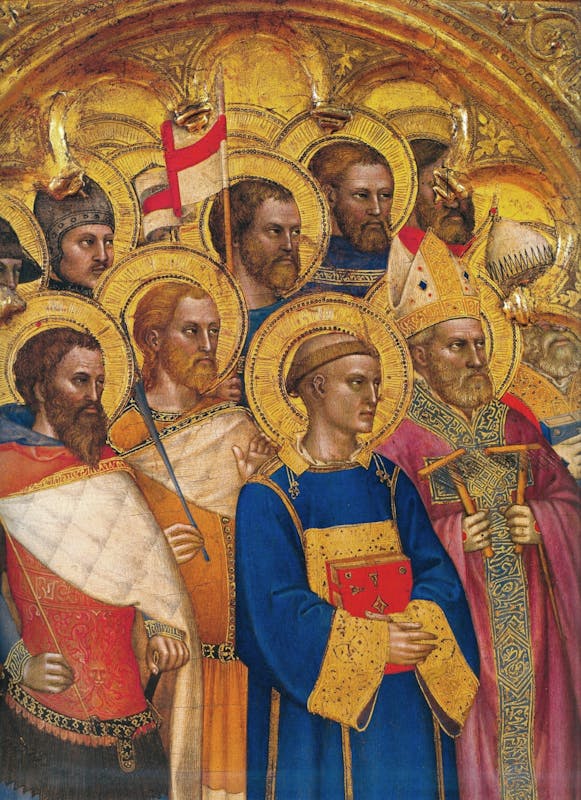 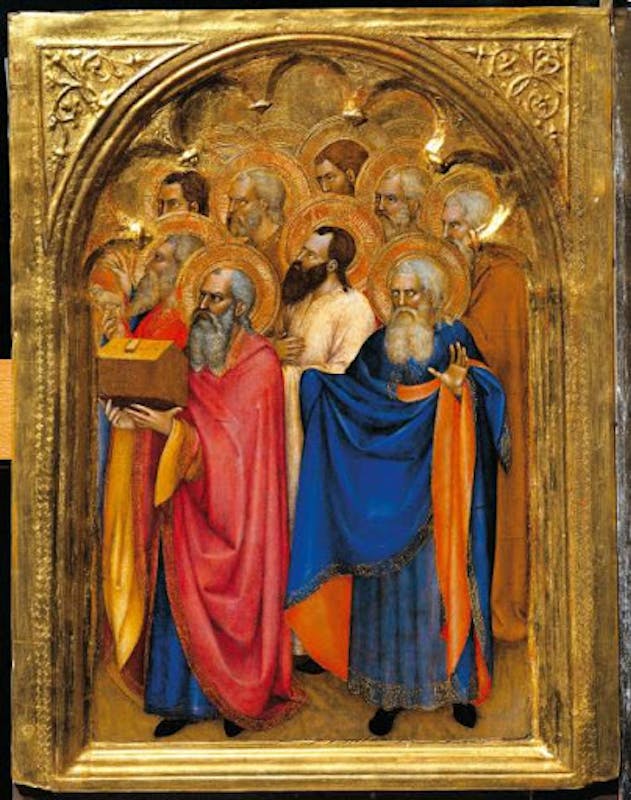 This series of compartments formed part of an enormous polyptych painted by Giovanni da Milano, for the main altar of the church of Ognissanti around 1360. The painter had been born in Caversaccio in the province of Como, but we have evidence of him staying in Florence as early as in 1346.

Having seen the work in the choir of the church of Ognissanti, Giorgio Vassari mentioned it in 1568, correctly attributing it to the artist from Lombardy, perhaps based on an inscription that was later lost. The structure of the entire work was designed to be very large and majestic and we can get an idea of what it would have looked like by comparing it with that of the polyptych kept in the Civic Museum of Prato, also painted by Giovanni da Milano in the same period. With the exception of a large empty space on the figure of the Virgin in the central compartment, the work in Prato has survived until the present day with the original carpentry almost intact.

In the polyptych of Ognissanti the Coronation of the Virgin is thought to have been set in the centre, identified by academics as the one today preserved in the National Museum of Fine Arts of Buenos Aires. It was flanked by the panels now in the Uffizi, depicting pairs of Saints moving forward on foot as if in a procession, each one sporting the attributes that make them recognisable. Their robes, in harmonious, iridescent colours, are finely decorated. There are many details, notably including Saint Stephen’s brocade dalmatic featuring plant patterns, the purplish silk cloak with gold trim worn by St John the Baptist and the refined periwinkle fabric with large roses worn by Saint Gregory. The figures’ skin is extremely realistic and on close observation one can see that it is created using a very dense collection of tiny crossed lines, painted with the tip of the paintbrush.

The five pieces of the predella enclose groups of smaller figures gathered together in choirs, each within a semi-circular arch: Virgins, Martyrs, Apostles, Patriarchs, Prophets.

A 17th century description of the work by Father Antonio Tognocchi of Terrinca (1691) confirms that a sixth compartment on the right, depicting another two saints, is missing. This probably featured the Creation of Adam and Eve in the tondos at the top, a scene that would fit in with the other surviving ones, all inspired by the Book of Genesis. The same document recalls another two parts now lost, the Choir of Confessors, under Saint James the Greater and Saint Gregory, and the Choir of Angels under the central compartment.

The polyptych of Ognissanti was therefore an impressive work measuring approximately four metres tall and over three metres wide. It was also part of a theological plan that mirrored the name of the church, dedicated to the Virgin and all the Saints, in Italian “Ognissanti”. And at the same time, it met the requirements of the religious community that had commissioned it, the Humiliati order who lived in the Florentine monastery.

The panel was positioned above the mensa of the main altar: therefore, if we consider the architectural structure of medieval churches, it was located over the choir of the monks, typically closed in by a partition that separated it from the nave, and it was therefore meant to accommodate the monks in prayer.

The changes made over the centuries within the church and changing tastes, led to the polyptych being first moved and then disassembled. Many of its parts were then dispersed and this seriously compromised its state of preservation. The Uffizi had it restored between 1858 and 1860, and subsequently purchased it for the sum of 2280 lire: the panels have been on display in the museum since 1863.