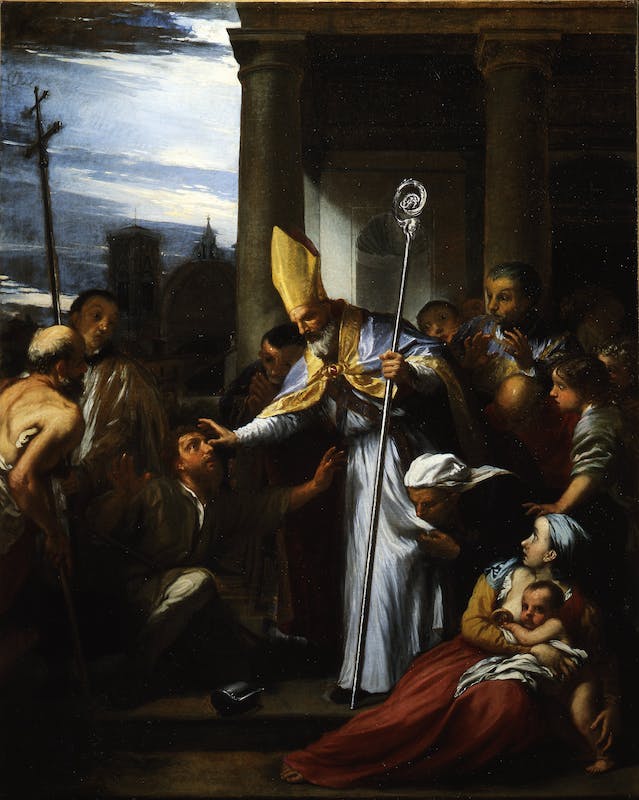 St Zenobius restores the sight of a blind man

The parable of the beggar miraculously saved from blindness was one of the episodes of the life of St Zenobius most commonly painted by artists between the 15th and 17th centuries. Zenobius, the second bishop of Florence, who lived in the 4th century, the city’s venerated co-patron, together with Antonino, and protector of the Accademia della Crusca since 1651, was recognised, in popular Florentine tradition, as the saint who protected people from diseases. The scene illustrates the moment when the saint, on the threshold of the church where he has just finished celebrating Mass, places his hand on the blind man’s eyes, restoring his sight and earning his conversion. He therefore appears to us not only as healer, but also as evangelizer of eastern lands, according to the provisions of the hagiographic tradition. The simplicity of his gesture, the strict composure of his stance, made even more solemn by the ray of light that focuses on him from the left, are in contrast with the lively reaction of the men and women around him, from the young mother sitting on the floor to the clerics and the two children on the right. With a rapid, narrative painting style composed of touches and contrasts of colour, the painter captures the genuinely shocked, wide-eyed, almost incredulous expressions on the faces of each character, faced with the sudden manifestation of a supernatural, salvific power. And yet the painter’s aim was not to relate the episode with emphasis and oratory, but to express a moment of life that could easily be imagined as having taken place in the streets of Florence at the time of the painter and his clients. And indeed, the symbols of both faith and the civil pride of Florence, Brunelleschi’s dome and Giotto’s bell tower, mark the landscape in the distance, carved into the sunset, streaked with pure white clouds.

The painting is thought to have been commissioned to Flemish painter Livio Mehus by Cardinal Leopold, and to have decorated the altar of his private chapel on the second floor of Palazzo Pitti.