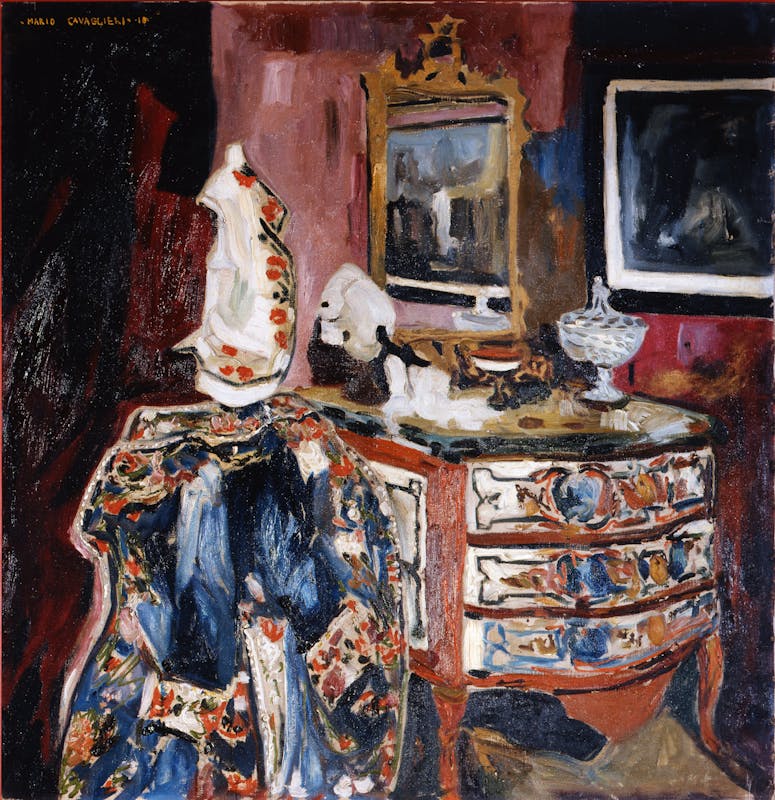 A refined, unconventional painter, Mario Cavaglieri was an artist who was not well-known to the general public but had been awarded top critical accolades from the very beginning of his long career. In fact, this painting belonged to Roberto Longhi who, when reviewing the painter in “Il Tempo” in 1919, praised his work as “one of the greatest that Italy has ever sacrificed, even now, on the shiny altar of Impressionism”. In 1953, Carlo Ludovico Ragghianti would then dedicate an in-depth solo exhibition to the artist in Palazzo Strozzi, critically reconstructing the pathway of his long career, almost all of which was completed in France, where Cavaglieri settled from 1925 onwards.

At the end of the 1910s, Cavaglieri dedicated all his efforts to creating a series of views featuring the interiors of splendid homes in his home province. In these paintings, the lesson imparted by the French masters, from Vuillard and Bonnard to the Arabesque decorations of Matisse, experienced during a stay in Paris in 1911, was rethought using a mature, controlled style.

Presenting the charm of an upper class interior in times gone by, elegiacally frozen as if in a snapshot, the fluid and exuberant brushstroke of Cavaglieri guides us as we discover his atelier: the richly decorated tailcoat invites us, in the foreground, to step into the proscenium, where a painted chest of drawers hosts a tidy arrangement of extravagant objects: a wig in 18th century style, a precious object in porcelain reflected in the wall behind it, and finally the cloak, or figure, that emerges from the background, in a carefully studied and executed crossing of spaces and glimpses, inside and outside the painting.

The painting was purchased for the collections of the Modern Art Gallery in 1987.