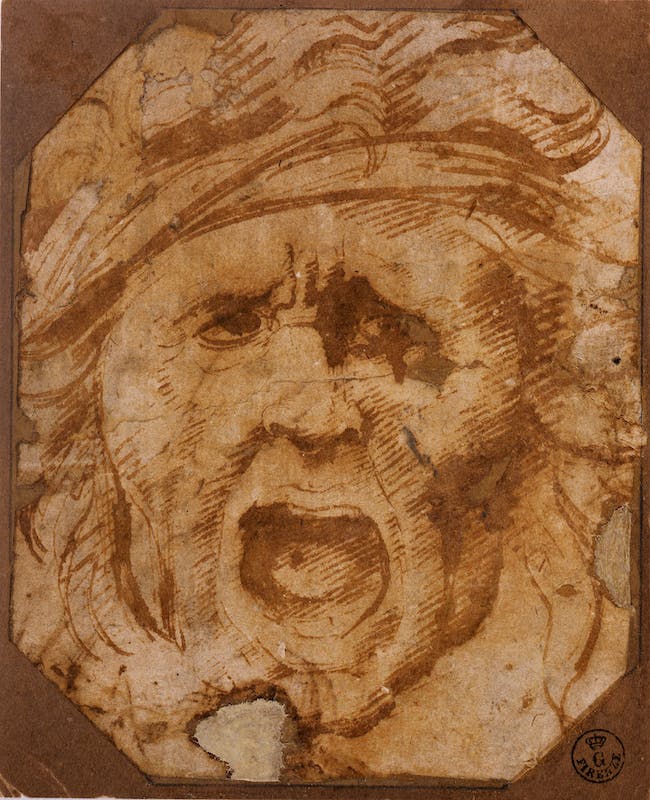 Self-portrait in the style of Medusa

In the late 18th century, this work was recorded as “Mask in pen” in the Inventory of Drawings for the Florentine collection. It was the first in the “Volume dei Piccoli” that contained twenty-two works considered to be by Andrea Mantegna.

The lengthy periods of display, first in the Corridor and then in the Gallery, have accelerated the process of deterioration in the iron gall ink, and the mediocre condition of the work is one of the causes of its exclusion from debates on research into Mantegna until recently. However, the strokes using parallel lines of different thickness, rapidly sketching out the facial features, at times interspersed with the wider, more fluid brush strokes used to portray the airy nature of the hair and the softness of the band on the forehead, make it obvious how formal synthesis betrays a secure, lively hand. A face and its expression are effectively portrayed with just a few strokes of a pen and brush, alternated in a rather calibrated manner,

This head offers a relevant physiognomy comparison with the famous Self-portrait frescoed by Mantegna in the Camera pita in Mantua: a surprise face, half hidden among the naturalistic decorations on a pillar, painted on the wall of the so-called Incontro, the same in which the artist’s name appears, written on the dedicatory plate, and a signature on the letter held by Cardinal Francesco Gonzaga.

The Florentine sketch and the ’Self-portrait in the Camera picta both have shared features such as the wrinkled brows, the shape of the eyes and the bags underneath them, the bold nose and the mouth with its characteristic lines. The most likely period for this drawing preceded the conclusion of the works in the Camera picta and therefore, 1474 could be the timeframe, understood as post quem time limit.

The expression on the face should be considered in the light of the use of masks, considered a fundamental part of Mantegna’s antiquarian culture. In his self-portrait, Mantegna combined both the apotropaic mask and the myth of the Gorgon who, in ancient Greece, also had magical purposes. The final result is a kind of consecration for eternity of what might be called his “stone poetry”, made obvious in the figures of statuettes and youthful frescoes in the Ovetari chapel in Padua, like images painted in faux marble or faux bronzes in the background that simulate the hard stones of his later monochromes.