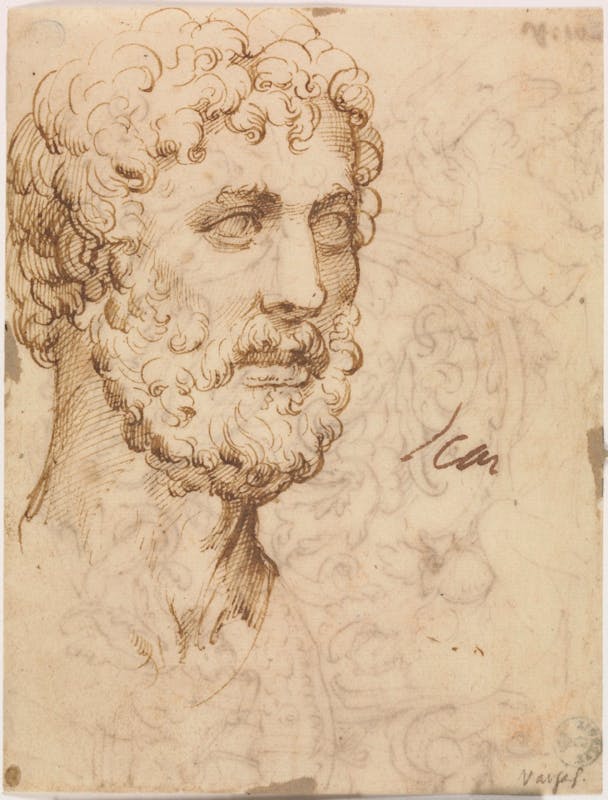 In the Catalogue of the large collection of drawings donated to the Uffizi by sculptor Emilio Santarelli in 1866, and published four years after the donation, sheet inv. 334 S is described under number 10 of the drawings by “Pierin Del -Vaga” with reference to the back only, which depicts elegant, ancient ornates all’antica, from the model of friezes and animated volutes from the height of the imperial age. It was only in 2005 when the lining was removed that the Man’s Head on the right side, later ascribed to Parmigianino, was found.

It was probably drawn in Rome, during a period in which the artist was interested in studying the graphic potential of the pen and its affinities with the burin technique, the Man’s Head shows physical characteristics reminiscent of the busts portraying Emperor Hadrian or better still, Emperor Antoninus Pius.

The almost three-quarter position and the intensity of the gaze, which can be perceived by observing the hollowed eye sockets, seem to point to an authentic portrait of some ancient personage who, although idealised, is commemorated in an unconventional manner.

A model such as this one, suitably re-designed, could have been the original idea for developing champions and heroes of Christianity destined for holy paintings, even in the years spent in Bologna after the Sack of Rome in 152: think of Saul, thrown from his horse in the Conversion, now in the Kunsthistorisches Museum in Vienna or of Saint Roch in the basilica of San Petronio in Bologna, who shows his wound and also a type of young, pathetic Christian hero, a descendant of the same classic progeny.

During his time in Rome, Mazzola saw the origins of a new humanity - classic and Christian at the same time - that could offer him new models for his painting.