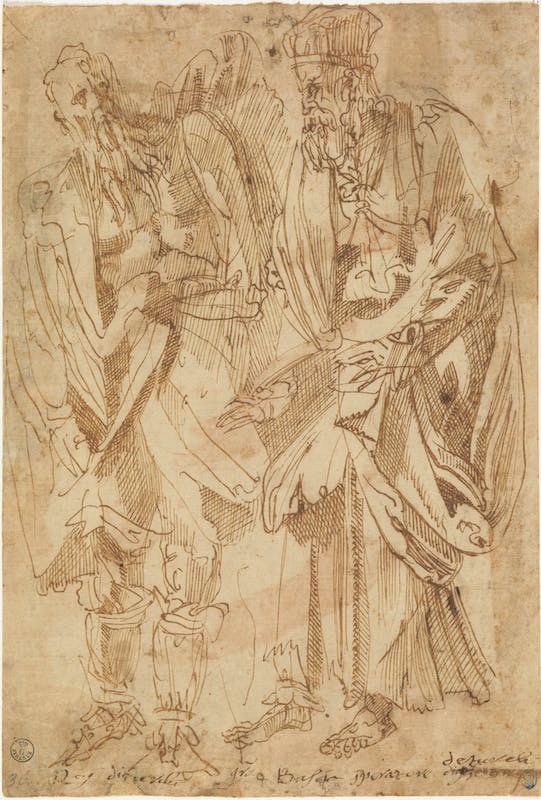 “Rex di Turchi gra[nde] Bal […] imperatore deturchi” on the rear, in pen, along the bottom margin

The catalogue of the collection by Emilio Santarelli, published in 1870, four years after its donation to the Royal Gallery of Florence, among sheets by Baccio Bandinelli, appear: “Two figures of old men standing, robed. Drawn in pen: grey paper” which can be identified as this drawing. It belongs to the part of the collection of drawings ascribed to Jacone, where it is easy to see the characters of Bandinelli, even if the artist was able to maintain an original independence from his model.

Its attribution to Jacone is a logical result of comparison to the Group of Figures (inv. 882 F) ascribed ab antiquo to “Giacone”, with which it shares the same trend, crisscross strokes and parallel lines. It also has certain idiosyncrasies in terms of style and morphology, in their hands and faces, deriving from Andrea del Sarto and Pontormo,  above all in the two-dimensional nature of the composition, resolved on the surfaces rather than measured in depth.

A certain more frozen traditionalism in terms of the stroke, which looks less convulsive and more calligraphic in style, could be due to the fact that it comes from a copied prototype. This brings to mind the facades painted by Polidoro da Caravaggio and Maturino da Firenze, studied by Jacone in Rome (perhaps together with the Roman frescoes of Perino del Vaga) before his return to Florence, enriched by an experience that he put to good use in chiaroscuro stories praised by Vasari.

On the other hand, this sheet also contains the characteristics that Vasari points out with regard to the study and development of positions and attitudes that often seem rather forced:  “[…] and he was very fantastic and bizarre in the posing of his figures, distorting them and seeking to make them varied and different from those of others in all his compositions. In truth, he had no little design, and when he chose he could imitate the good. ” (Vasari 1568, Bettarini-Barocchi, V, 1984, p. 403).