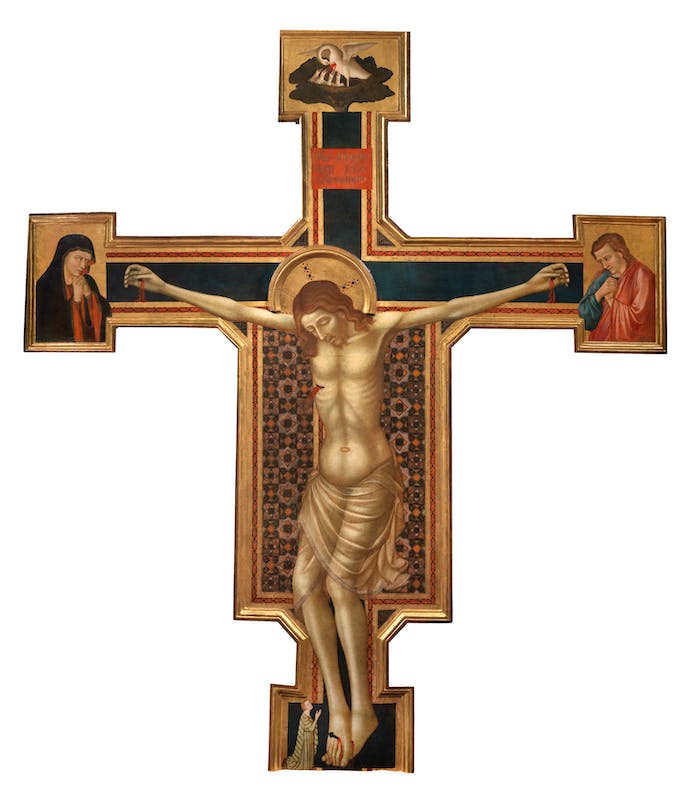 The dead Christ is shown with his lifeless body on bent knees, held in place by the nails in his hands and feet. The naturalness of the abandoned body is accentuated by the position of the head and bust, both of which are falling forwards. This iconography was created by Giotto at the end of the thirteenth century and quickly replaced the highly expressive but unnatural style preferred until then.

In the panels on either side of the cross, the Virgin Mary and St. John the Evangelist contemplate the Saviour, hands joined together in a position of contrition. Above the cross is the figure of a pelican feeding its young with the blood of Christ, an allegory of his dying to redeem humanity.

At the foot of the cross is a very small depiction of the commissioning client praying. The elegant clothing he is wearing reflects his high social status.

This particular work of art is attributed to an anonymous Florentine painter from the early fourteenth century, whose conventional name, Maestro del Crocifisso Corsi, originates from a painted cross that once belonged to the Corsi Collection in Florence. The painter is clearly inspired by Giotto, his contemporary, but has a harsher, more poignant painting style.

The cross came to the Uffizi Gallery in 1782 from San Pier Scheraggio Church, a medieval parish church that was incorporated into the building when the Uffizi was built in the sixteenth century. It was later transferred to the Galleria dell'Accademia in 1919 before being returned to the Uffizi in 2019 after being thoroughly restored.