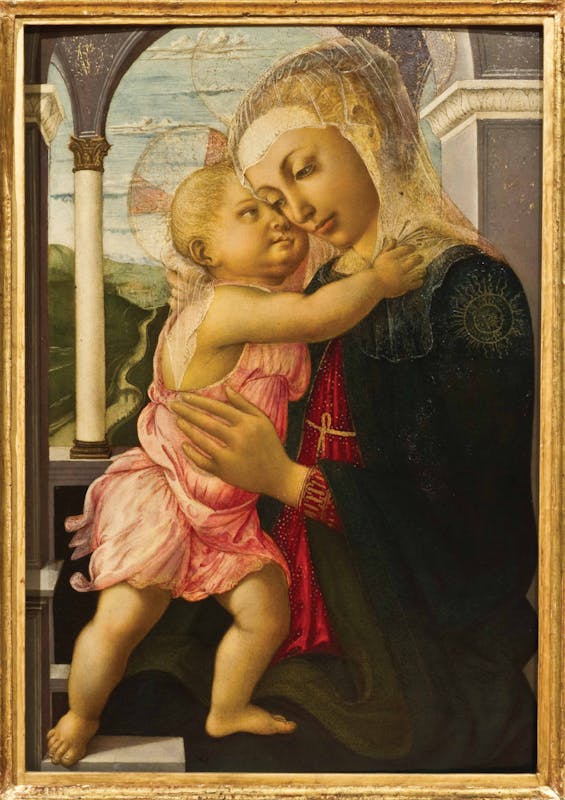 A three-quarter portrait of the Virgin Mary affectionately  holding baby Jesus who is hugging his mother fondly, placing his face near her cheek. This is an ancient iconography of Byzantine origin, the Glykophilousa, which again rose to success among the Florentine artists of the 15th Century. Mary appears thoughtful, anticipating the painful destiny awaiting her child. The two figures are placed within a Renaissance architecture that opens up on the background, a lodge, from which the painting takes its name. This work can be dated to Botticelli’s early years, as suggested by the references to Filippo Lippi’s style. Having attended the workshop of a goldsmith at a very young age, Botticelli completed his painting apprenticeship in Lippi’s studio.  Botticelli left Lippi’s studio around 1467, at the same time as when Filippo moved to Spoleto and he probably grew close to Andrea Verrocchio, the other great master who had a strong influence on his training; the Madonna della Loggia was painted in this moment of his life. The image expresses the natural sentiment a mother has for her child and radiates a sense of tender intimacy. On the other hand, the composition is a reference to the Madonna with Child painted by Filippo Lippi around 1460 in Palazzo Medici Riccardi in Florence, which had in turn been inspired by the interpretations of the theme shared by sculptors such as Lorenzo Ghiberti, Donatello and Luca della Robbia, using a variety of materials, especially clay, marble and stucco.

However, Botticelli refers to Flemish painting for the environment: his figures are set in front of a lodge that opens up on to a rural landscape portrayed in minute detail Unfortunately, this part of the painting appears to be ruined, despite its restoration in 2004, which also confirmed its authenticity. Previously Botticelli’s signature had been doubted due to its mediocre state of conservation.

The work, which is likely to have originally been set in a tabernacle frame, could be one of the so-called “colmi da camera” destined for private religious devotion, which Botticelli worked on before receiving more challenging commissions.  One theory about the commissioning of the Madonna della Loggia is offered by its provenance. In fact, the painting was given to the Uffizi Gallery by the Chamber of Commerce and Arts in 1784. This institution had absorbed the functions and confiscated the properties of the ancient trade guilds, known as the Arts, and of the Court of Mercanzia.  Therefore, it was probably painted for one of the Arts or the Court of Mercanzia.