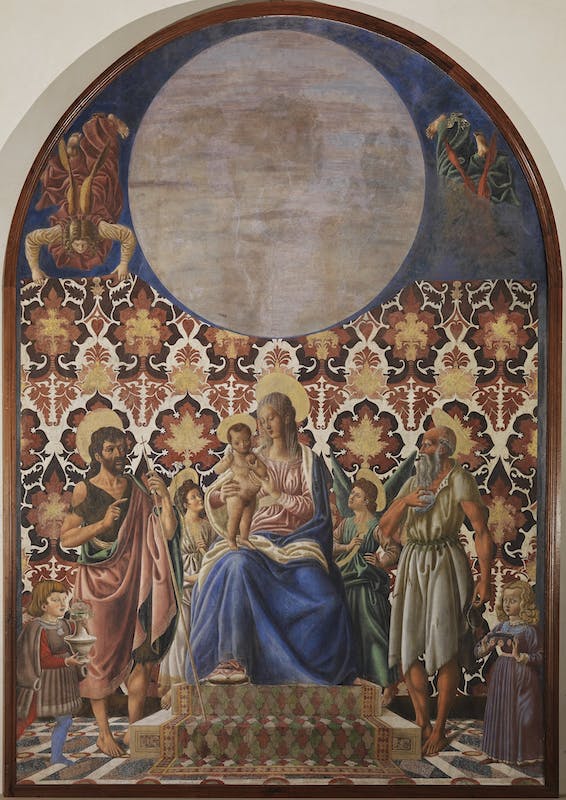 At the top, two angels are holding a cloth of honour behind Mary, seated on the throne with her Son. Mary is holding the baby Jesus, whose nakedness emphasises the incarnation of the Son of God as the Saviour of humanity. This message is stressed by the gestures of St John the Baptist, who is pointing to the Saviour from the left of the painting. Jesus is looking to the right, at St Jerome, Father of the Church, shown here as a penitent hermit, beating his chest with a rock. In his hands is the circulum precatorium, a string of beads used for prayer.

The identity of the two children offering Mary and Jesus a vase of flowers and a crown of roses is unknown. They could quite plausibly be members of the Pazzi family who owned the Castle of Trebbio in Pontassieve (Florence), where the fresco was originally painted. The girl on the right is usually thought to be Oretta Pazzi, born in 1437, while the boy on the left has been thought to be either her twin, Niccolò, who died as a baby, or her younger brother, Renato, born in 1442. The boy is wearing a collar with a sail-shaped pendant, which alludes to the fortune granted to the Pazzi family by French king René of Anjou in 1442.

The polychrome marble tiles on the floor, the carpet covering the steps, and the glimpse of the two angels in flight show the expertise achieved by Andrea del Castagno in terms of perspective, while the statuary quality of the figures reflects the artist’s attention to the sculptural work of Donatello. The ornamental motifs on the fabrics and floors almost dominate the figures and add a sumptuous richness to the composition, in line with its private destination. The fresco was located in the chapel of the Pazzis’ castle.

It was detached in 1897 under the supervision of antiquarian Stefano Bardini and bought by Alessandro Contini Bonacossi in 1930.