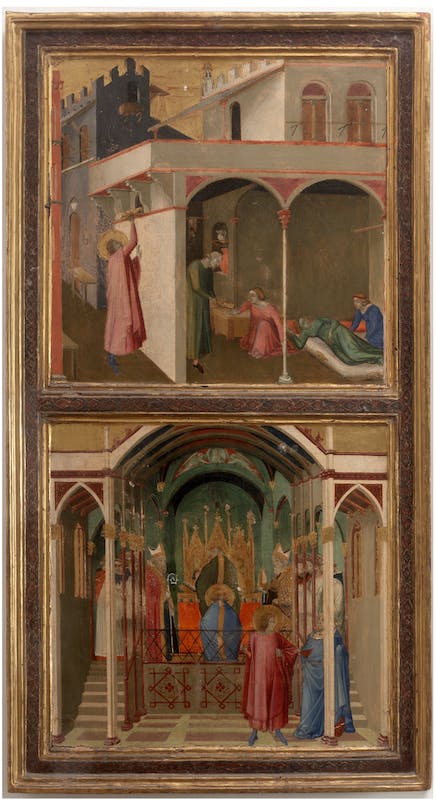 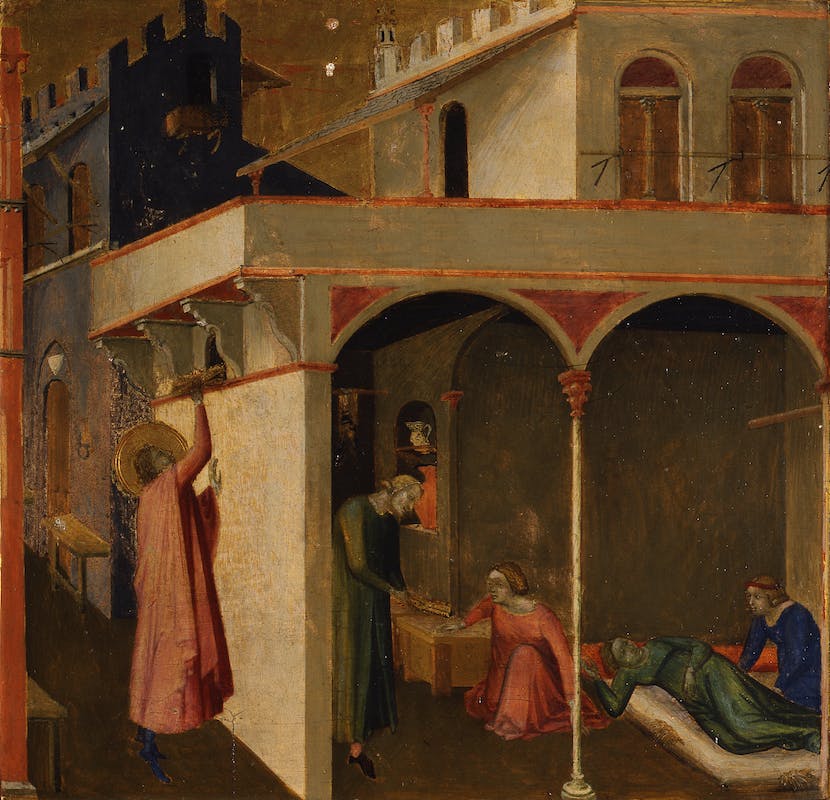 In the scene at the top, St Nicholas is busy throwing some pieces of gold to a poor man to enable him to gather the dowry required to marry off his daughters. The alms of St Nicholas is an exemplary act: he carries out the charitable deed secretly, humbly, without seeking acknowledgement.

In the scene at the bottom, St Nicholas is ordained as bishop of the city of Myra in Asia Minor, by divine will. Legend has it that the prelates who had gathered to elect the new bishop of Myra heard a voice ordering them to choose the first man named Nicholas who entered the church. The scene shows the saint twice, once in the foreground on the right, dressed in pink at the entrance to the church, as a prelate approaches him, and then kneeling in the presbytery before the altar, where he is ordained as priest and bishop.

The panel is the first part of a cycle featuring four stories of the legend of St Nicholas (see also inv. 1890 no. 8349 ), the overall structure of which still remains a source of mystery today. The presence of hinge-like elements along one of the two sides of both panels suggests that they were the side elements of a reredos probably featuring the figure of the saint in the centre.

Having come to the Florentine Gallery from the Benedictine abbey of Santa Maria in Florence at the beginning of the 19th century, the panels were originally part of the furnishings in a nearby church named after St Procolo. They are an outstanding testimony of the activity of Siena-born painter Ambrogio Lorenzetti who, like his brother Pietro, worked for various Florentine customers. In addition to his extraordinary storytelling talent, in these exceptional works, the painter also displays his passion for complex spatial orchestrations and his great skill in depicting architectures. The brushwork, albeit deteriorated, is in any case extremely refined, painstakingly executed right down to the tiniest detail.

The stories of St. Nicholas by Ambrogio Lorenzetti

Video in Italian | Protector of kids, known in the Nordic countries as Santa Claus or Father Christmas