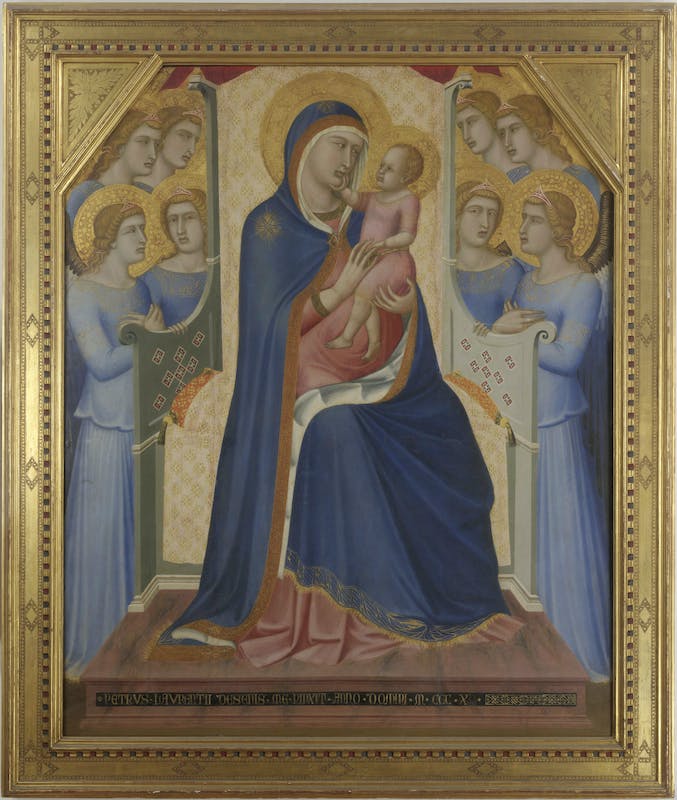 The painting, a fragment of a larger panel, depicts the Madonna in Majesty, enthroned with Baby Jesus, and encircled by angels. Mary and her son are caught up in an intimate exchange of tender looks, and the affectionate gestures with which Jesus strokes his mother’s face and grabs her fingers testify to their closeness. The baby has his legs crossed, a position often encountered in the iconography of Jesus, which alludes to his role as supreme judge.

The marble throne dominates the composition, rigorously facing the front and forming a sort of architecture that measures and constructs the space occupied by the Virgin and angels, figures depicted with clear volumes and refined by a delicate chiaroscuro effect. The light on the throne appears to indicate a light source located on the left, as seen in the different shades of the two arms and the stone frames, one light and the other darker.

The painting has undergone many alterations over the centuries. The inscription in the step of the throne, bearing the name of the painter Pietro Lorenzetti and the date, 1340, has been restored several times, and some characters are missing, so the exact date of the work is unclear. In any case, it is definitely a late work by the Sienna-born painter, the undisputed protagonist of early 14th century painting in central Italy.

The panel came from the church of St Francis in Pistoia and was brought to the Uffizi in 1799 by Senator Giovanni Battista Cellesi.