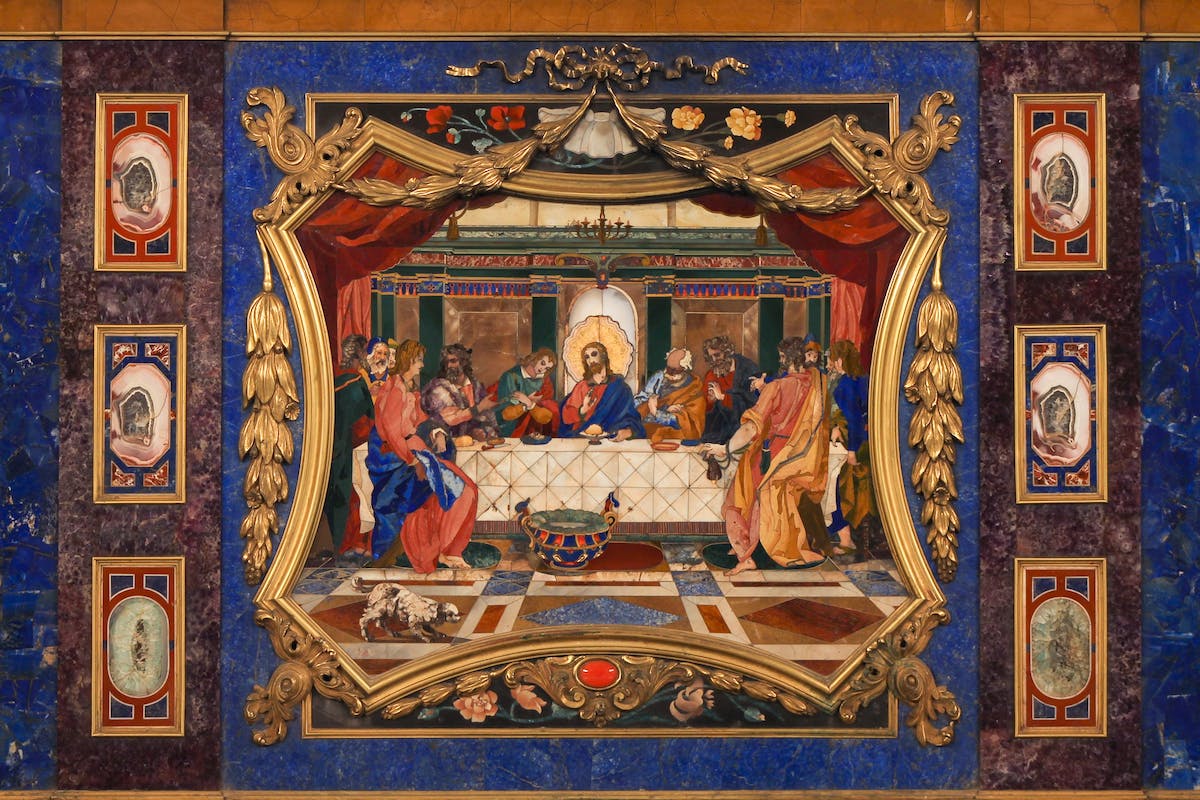 The work was part of the group of nine panels with sacred stories in semi-precious stone inlays executed by the workshops of the Grand Duchy in the first decades of the 17th century to decorate the altar an Chapel of the Princes in San Lorenzo, commissioned by Ferdinando I de’ Medici but never to be completed. The only New Testament subject in the series, the Last Supper, in the original layout of the sumptuous structure occupied the central part of the upper step of the ciborium, destined for the safekeeping of the Blessed Sacrament. In 1785, the panel was chosen to decorate the antependium of the new altar of the Palatine Chapel and in view of this arrangement, it was partially cut along the perimeter, thus acquiring its current shaped form. On the same occasion, the two red curtains were added to the representation, introducing the scene with an effect as if it were a stage, along with the gilded bronze frame with festoons.

The Last Supper testifies to the high degree of technical skill reached at the beginning of the 17th century by the court workshops in the work of inlays in semi-precious stone, which from simple decorative elements destined mainly for table tops took on the appearance of true paintings in stone with articulated compositions, with a wealth of figures. Archival documents attest to the involvement of the painter Ludovico Cardi, known as Cigoli, in the preparation of the drawing for the Last Supper, delivered in 1603. Its translation to inlay in semi-precious stone was entrusted to the brothers Cristofano and Giovan Battista Gaffuri, sons of the Milanese maestro Giorgio Gaffuri called to Florence in 1575 by Francesco I de’ Medici. The Gaffuri brothers executed the work from 1604 to 1606, using a varied assortment of gemstones, including jaspers from Cyprus, Candia, Bohemia and Sicily, agates, lapis lazuli, amethyst quartz, oriental chalcedony, carefully selected according to their chromatic nuances to render the modelling of the figures and the clear architectural structure of the room.