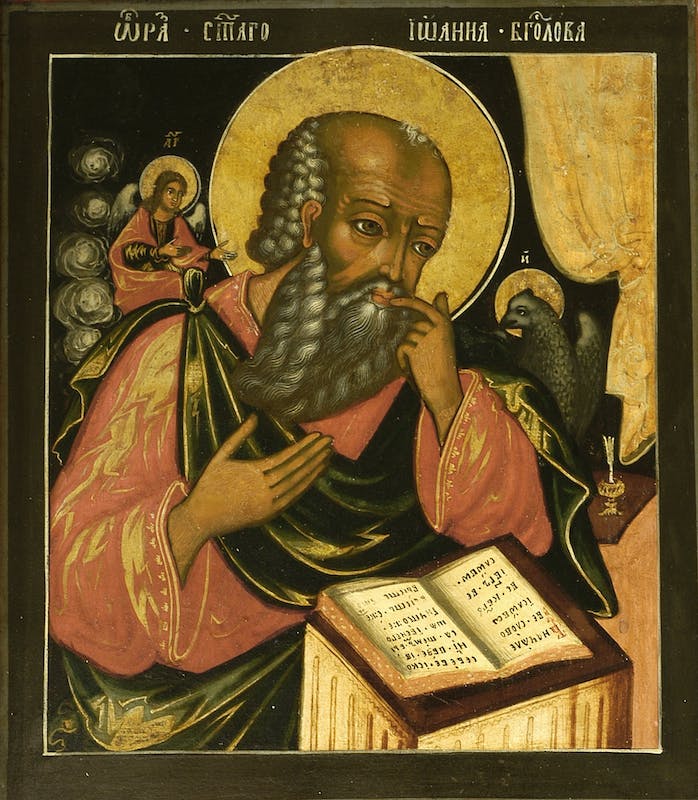 John, both apostle and evangelist, is seen here as a half-bust in front of an open book showing the opening words of the gospel written by him. His facial features are those of an elderly man and he is grey haired with a long beard. Near him is an eagle, symbol of the evangelist in the tetramorph, together with the angel which exhorted John to tell of his visions on the island of Patmos which then became part of the Apocalypse. The small ink horn with goose quill against the background highlights the importance of John's writings in passing on the word of God.

The icon’s title derives from the saint's hand gesture in which his finger is on his lips, inviting silence. It is assumed that this particular gesture originated in an extract from his gospel which ends thus: ‘And there are also many other things which Jesus did, the which, if they should be written every one, I suppose that even the world itself could not contain the books that should be written.’ (John 21, 25).

This iconography was widespread in Russia in the 16th century, with secondary details such as the ink pot and the other figures making their appearance from the 17th century onwards.

The work of a provincial workshop, the painting shows a certain Baroque tendency and an interest in early 18th century Muscovite painting with is openness to European art. These characteristics are visible in the massive volumes of the figures, which barely fit into the figurative space, as well as the movements of the clothing.