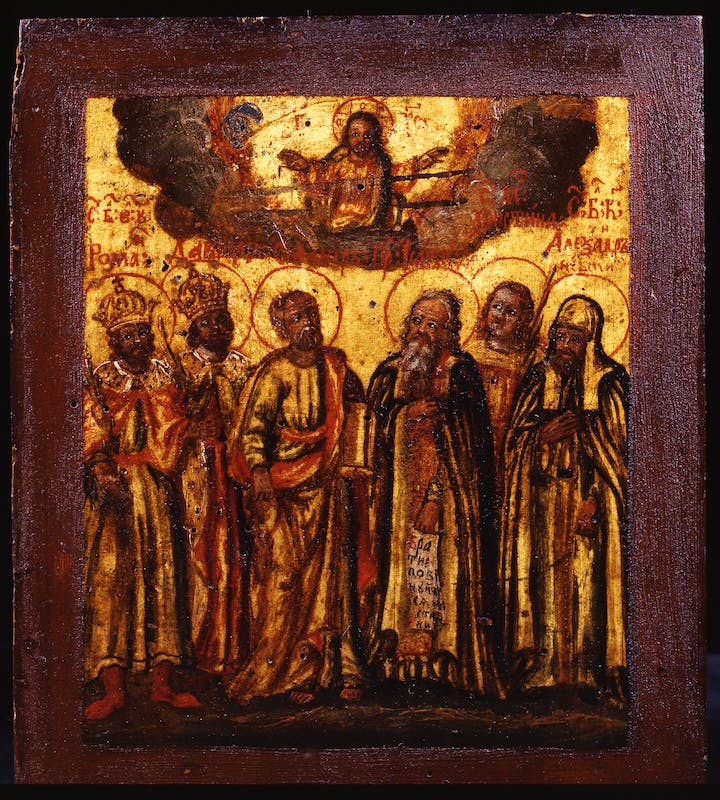 Surrounded by a veil of clouds, Jesus Christ is depicted at the top in the centre, as he blesses with both hands the six saints in the bottom part of the composition. The saints, identified by the inscriptions, are, from left to right, holy princes Boris and Gleb, Peter, Isaac, Christina, and Aleksandr Nevskij.

The icon is particularly interesting for the unique scene depicting the saints, all connected with Tsar Peter I, known as Peter the Great (1672-1725) and the foundation of St. Petersburg (1703). St. Peter and St. Isaac are the main focus of the work, portrayed in the centre of the composition: the former was the patron saint of the Tsar, and protector of the new capital, while the latter is celebrated on the birth date of Peter I of Russia, on 30 May. The sovereign was also particularly devoted to Aleksandr Nevskij (1220-1263): thanks to his military achievements, such as defeating the Swedish invaders, the holy prince was considered the precursor of Tsar Peter the Great, who had also claimed victory against Sweden. For this reason, the remains of Aleksandr Nevskij were moved from his original grave in Vladimir, to the new monastery dedicated to him in St. Petersburg, where they arrived on 30 August 1724. The depiction of saints Boris and Gleb is linked to the veneration of Aleksandr Nevskij. They predict the grand Battle of the Neva against the Swedish invaders (1240). The two holy princes are celebrated on 24 July, the same day on which St. Christina is commemorated, the only female saint present in the icon.

The work, a religious-style exaltation of the kingdom of Tsar Peter the Great, was probably created to mark the arrival of heroic condottiero Aleksandr Nevskij’s remains in in St. Petersburg. It differs from all the other icons in the Florentine collection for its use of oil paint, an element that testifies to the growing influence of contemporary European painting on this master, who chooses to move away from tradition and instead experiment with more expressive, naturalistic kinds of painting.