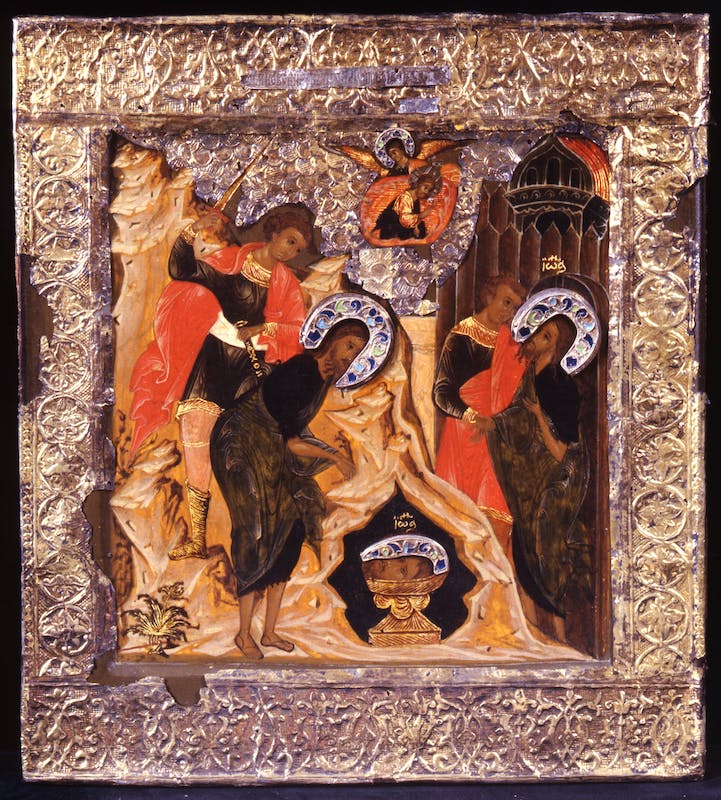 The icon illustrates the last phases of the life of St John the Baptist. The story begins on the right, with John being led out of prison by a man at arms to be put to death, on King Herod’s orders. The saint is looking towards Christ who, uplifted in a cloud by an angel, is blessing him. On the left, John is depicted with his hands tied, about to be struck by the executioner’s sword. The scene is set against a rocky background reminiscent of the desert to which John, the last prophet, had withdrawn to repent his sins, preaching, and announcing the arrival of the Son of God. A small tree appears on the bottom left with an axe laid against its roots, a quote from John’s sermon passed down by the Gospels (Matthew 3:10; Luke 3:9). The centre of the composition, in the foreground, is occupied by the martyr’s severed head, lying in a gold basin in the hollow of the rock.

The veneration of the beheading of John the Baptist gained popularity in Russia during the age of Tsar Ivan the Terrible (1529-1584), whose name day fell on the day of the holiday dedicated to the saint’s martyrdom (29 August). The icon of the Uffizi Gallery was created between the end of the 16th and the beginning of the 17th century, in a workshop in the capital city, Moscow. Silver lamina and enamel inserts, the use of filigree for Christ’s halo and the thin gold leaf assist outline make this icon an extremely sophisticated and precious work of art. The gilded silver coating applied as a basma, that is, with thin metal leaf strips placed directly onto the icon, dates to the same period as the painting.

We do not know when the holy image came to Florence, but it can probably be identified as one of the ornaments preserved in the Chapel of Relics of Palazzo Pitti as early as in 1639, at the time of Ferdinando II de' Medici, Grand Duke of Tuscany and Vittoria della Rovere.