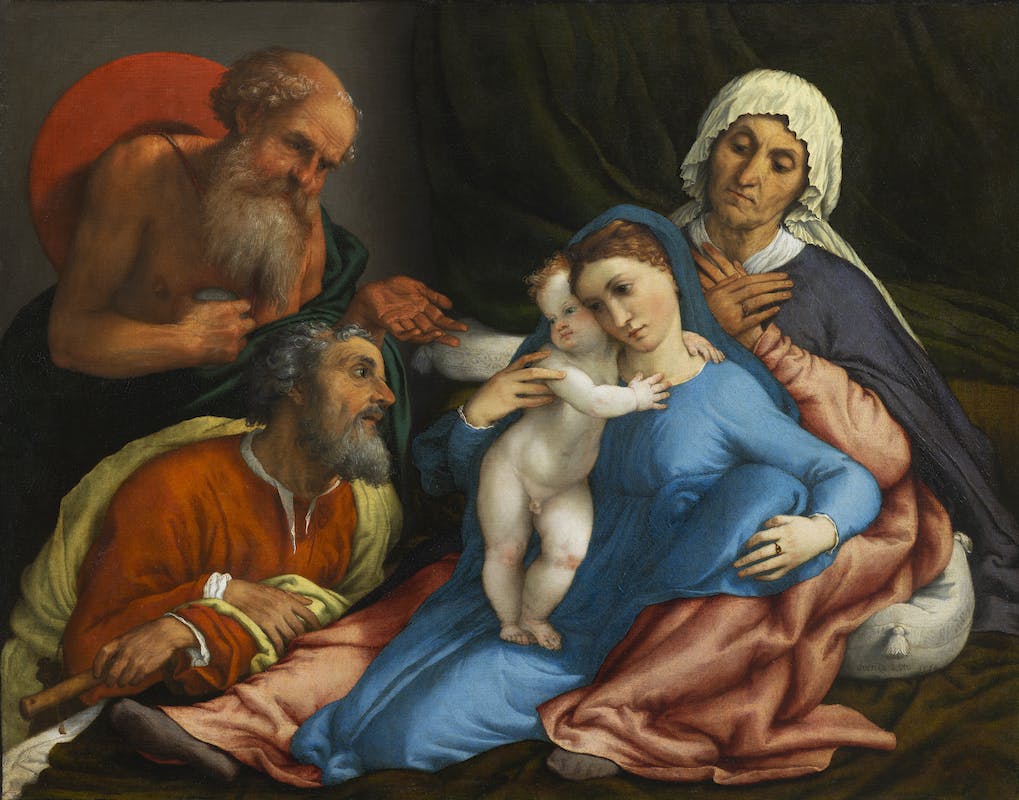 This painting comes from the famous collection of Ferdinando de’ Medici, Grand Prince of Tuscany and on the right side, at the base of the cushion on which St Anne and the Virgin Mary are seated, it is signed: “Lorenzo Loto 1534”.

It is one of the first works completed a few months after Lorenzo Lotto arrived in the Marches. The date (1534) is a fixed point in reconstructing the painter’s work through the fourth decade of the 16th century.

Inside the Virgin’s bedroom, the holy figures are shown in a direct, touching manner, following an original approach introduced by Flemish painters, and one that is similar to the artist’s other painting from the same period, such as the Annunciation in Recanati.

The canvas stands out for its originality, also from an iconographic viewpoint: St Anne is leaning against the step on a four-poster bed, with her legs open with the Virgin and the Baby Jesus between them, singularly and vividly representing in this manner, the concept of their descending from her womb. The presence of St Jerome, on the left, pointing to the Holy Family with his open hand, may be a reference to the person who commissioned the work, named Jerome.

The range of acid colours, the gradation of cold light and the lack of contrast in the shadows confirm the characteristics of Lotto’s works in that period, including the “Holy Family with St Catherine of Alexandria” at the Carrara Academy of Bergamo, which is signed and dated 1533

A version of the same work (painted in collaboration with his workshop) is in the Courtauld Gallery in London. It is completely similar to our work except for the presence of an area of scenery in place of St Jerome.

The restoration of The Holy Family by Lorenzo Lotto

Lecture in Italian. Fausta Navarro and Elisa Todisco: conservation as a medium of knowledge, protection and enhancement. Vasari Auditorium - 24t...