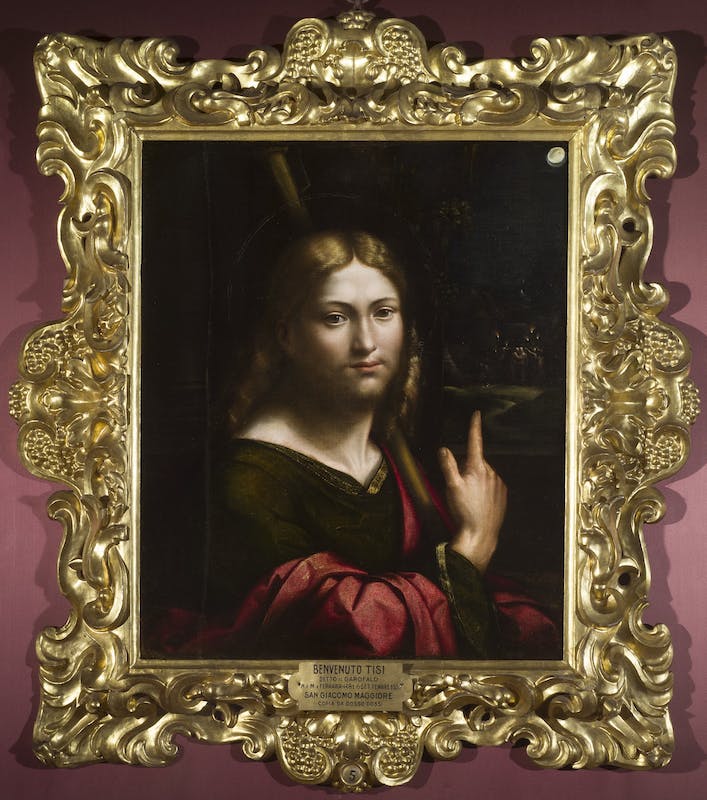 The work comes from the collection of Cardinal Leopoldo de' Medici, where, in an inventory of 1675, it was known as the "Bust of the Saviour". It represents instead the apostle James, defined as "the Greater" to distinguish him from James of Alphaeus, "the Lesser".

The misinterpretation has merit, however: James, in fact, is depicted in iconographic tradition with characteristics similar both to his brother John, the beloved apostle of Jesus, and to Christ himself: young, with a light beard and hair and a "Nazarene" haircut. The painting also shows the Saint in a half-length position, three-quarters of the way up to the observer, holding a stick like some contemporary representations of "Christ carrying the cross" and intent on pointing with the index finger of his right hand to the splendid miniature behind him, depicting the nocturnal capture of Jesus in the Garden of Olives.

However, having overcome the misunderstanding of identity, the staff can be clearly recognised as a pilgrim's staff, the attribute that classical iconography assigns to James as an aid to the long journey made by pilgrims to Galicia, in north-west Spain, to reach his tomb.

Stylistically, the painting appears to be inspired by Raphael's prototypes and can certainly be dated to the years in which Garofalo worked with Dosso Dossi on the important Costabili Polyptych (Ferrara, Pinacoteca Nazionale).

In fact, there are several similarities between Saint James and the intense masterpiece resulting from the collaboration of the two artists, starting with the nocturnal scene in the background, which finds a parallel in the lunar atmosphere present in the four side compartments of the Ferrarese polyptych.

However, the controversial dating of the latter, now generally ascribed to the two-year period 1513-14, has for a long time led to uncertainty about the date of completion of the Saint James, probably circumscribed to the second decade of the 16th century.