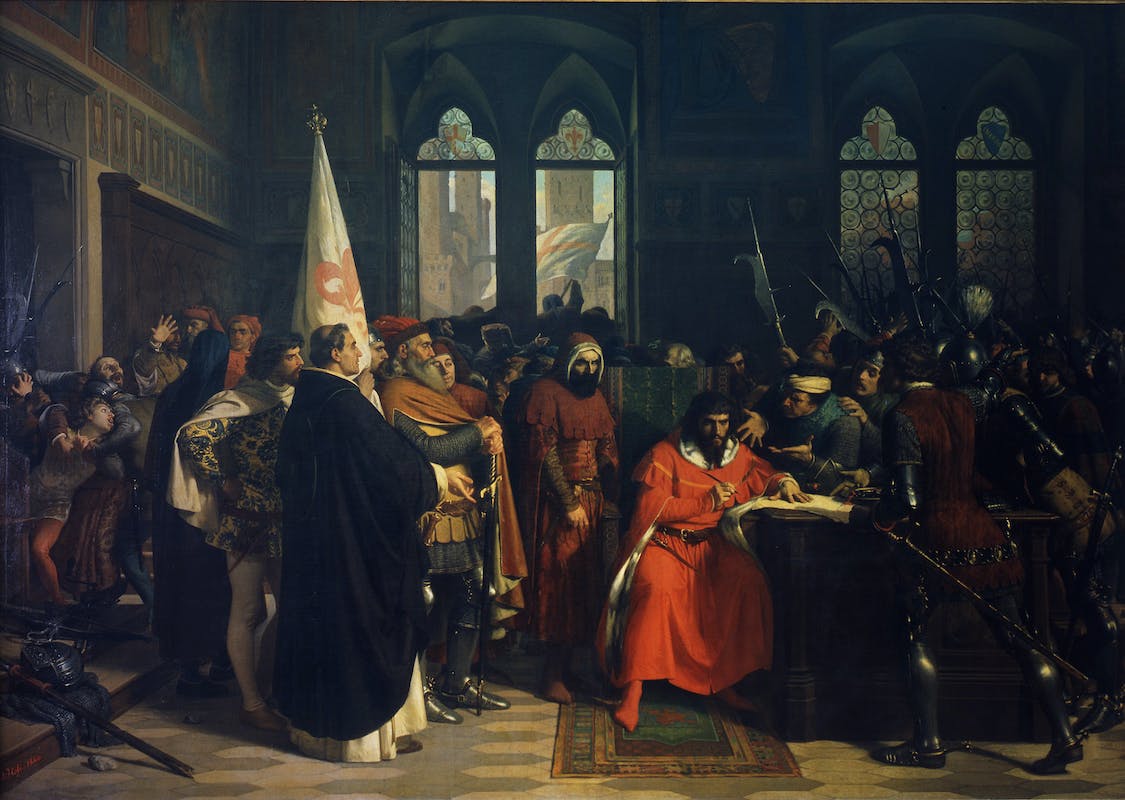 The subject of the painting takes its inspiration from an episode mentioned by Niccolò Machiavelli in his second book of Florentine Histories, about the expulsion of Walter of Brienne, Duke of Athens, in July 1343. The scene is set in a room in of the Bargello Palace, where the Duke, who had ruled despotically over Florence, is about to sign his resignation from government over the city. His expression matches the grim face of the perfidious councillor, Cerretieri Visdomini standing behind him, and also provides a contrast to the stationary attitudes of the characters on the left, identified as the figures behind the plot: Archbishop Acciaioli and representatives of the aristocracy and of the people. The ferment in the background culminates with the figure of the soldier on the right who, with his gestures, seems to urge the Duke to make this difficult choice, while through the window, it is possible to notice the celebrations already taking place in the city.

The painting dates back to 1860 and was likely intended to commemorate the recent events of the liberation of Italy from oppressive foreign rule: first and foremost, the Austrian Empire. In fact, it was Tuscany that expelled its Grand Duke, Leopold II of Habsburg-Lorraine to join the newly formed Kingdom of Italy.

This large canvas was a triumph at the 1861 National Exhibition in Florence, and at the 1867 Paris Exhibition, where it was awarded first prize and a gold medal respectively. The lengthy time for its creation can be seen in a series of preparatory drawings, now in the Departments of Prints and Drawings, and a sketch preserved at the Gallery of Modern Art in Pitti Palace. The theatrical setting of the scene, which is typical of the historic genre, has been enhanced by the identification of physiognomies and individual expressions. Presumably some of the artist’s friends posed for the main figures in the painting and the figure of the armiger with the bandaged head is Ussi himself.