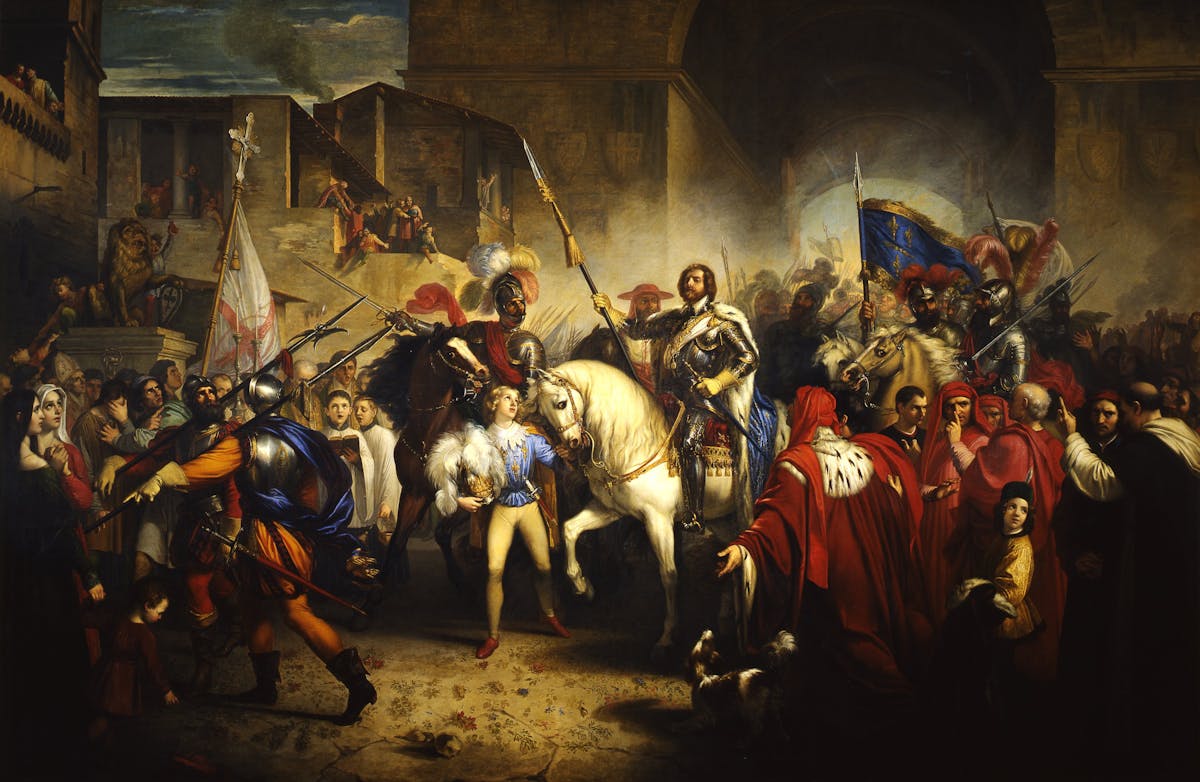 Entry of Charles VIII into Florence

Commissioned by Grand Duke of Tuscany Leopold II of Habsburg-Lorraine from Giuseppe Bezzuoli and painted between 1827 and 1829, this great canvas depicts a scene from Florentine history, suggesting its similarity with the recent Napoleonic invasions of the previous decades. On the 17th  of November 1494, following his conquest of the Kingdom of Naples, King of France Charles VIII made his entrance into Florence as ruler. Because of his isolation and lack of allies, Piero de’ Medici, the son of Lorenzo the Magnificent who ruled the city at the time, did not send an army to stop the invasion, thus fuelling the resentment of the Florentine people who finally forced him into exile.

In the centre of the scene, the King advances triumphantly astride his horse, greeted by a bow from the gonfalonier. In the foreground on the right, a group of important Florentines including Machiavelli, Pier Capponi and Savonarola plot the city's revenge; on the left, worried citizens observe the scene. In the close foreground, a small still life summarizes the contrasting feelings surrounding the event: flowers and stones lie scattered on the ground in the King’s path.

As often seen in eighteenth-century historical narrative, the events are depicted through the careful representation of the characters’ feelings and certain important details such as the faces and expressions, the details of the costumes, the use of light and the highly theatrical composition. The viewer is invited to explore the elaborate composition, actively participating in the emotions expressed in the painting and gaining insight into the present by reflecting on the past.

Bezzuoli painted the work on a canvas delivered from Rome specifically for the purpose, which was then housed in a large room of the Ospedale degli Innocenti in Florence. On its completion, it  was transferred to the ground floor of the Pitti Palace and in 1861 was presented at the Esposizione Italiana (Italian Exhibition) in Florence. Certain letters document the different phases of the painting with the “multitude of studies of the real world including men, horses, clothing”: five of these studies are housed at the Department of Prints and Drawings while seven notebooks are held at the Gallery of Modern Art.

The canvas confirmed Bezzuoli as one of the leading figures of historical Tuscan Romanticism, with a language inspired by the bright colours of the sixteenth-century Venetian painting as well as the lively expression of emotions more characteristic of seventeenth-century painting.