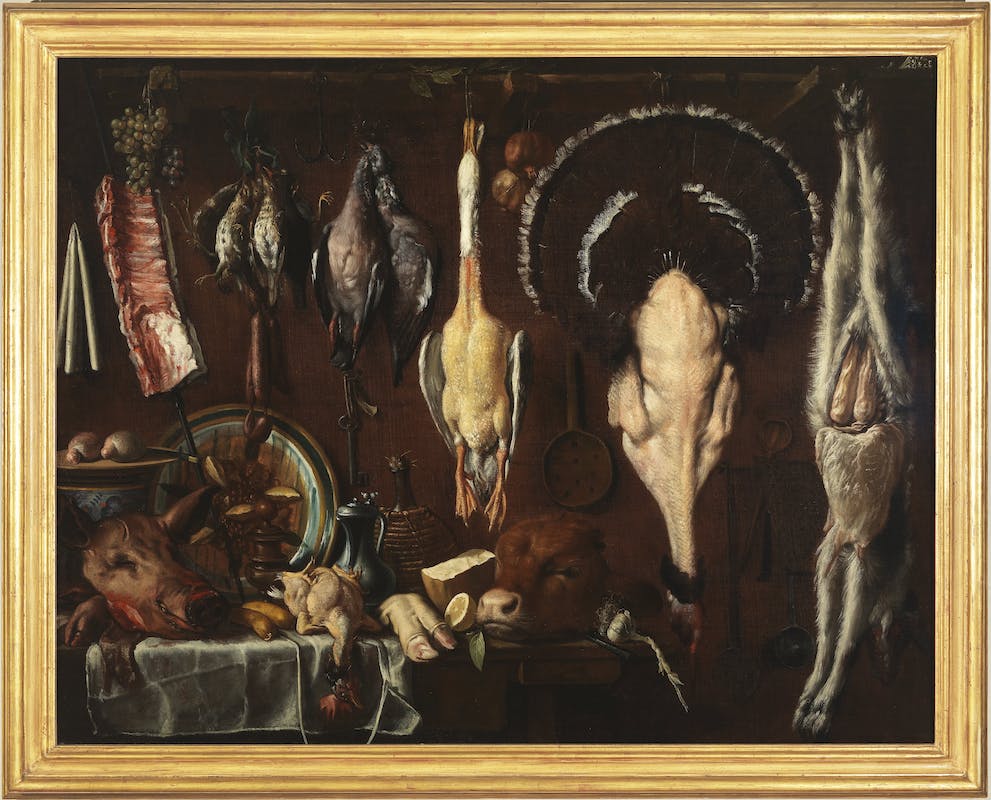 A clean light illuminates the game, meat, salami and on the table, a variety of foods and pottery. A closer look offers a deeper understanding of the typical foods eaten in a wealthy Tuscan household during the first decades of the 17th century.

This painting, like its accompanying piece (inv. 1890 no. 8442 ) currently exhibited in the same room as Caravaggio’s Bacchus, was painted by Florentine artist, Jacopo Chimenti, also known as “l’Empoli” from the name of the town from which he originally came.

On the wooden instrument depicted on the far right of the canvas, it is possible to read: “Di Jacopo da Empoli 1624”. This dates the piece to the final stages of the artist’s long and successful career. He was above all a painter of “figures” and the creator of many altar pieces, with narrative, devotional tones in line with artistic tastes promoted by the Counter Reformation.

The painting, like its companion piece (and other similar subjects painted by l’Empoli with a large variety of foods in the foreground) is known as Dispensa [Pantry], in reference to the areas used for food storage and preservation next to the large kitchens of 17th-century palaces and villas. Pantries were fitted with large wooden tables, shelves and long wooden boards over the walls, fitted with hooks for hanging foods and meats for curing. These elements can be found in the painting, but the fact that there is food on the table that has already been eaten, such as the squeezed lemon half next to an elegantly decorated pie, or the bread, broken into pieces, rather conveys the idea of a corner in a well-stocked kitchen, where the preparations are in progress for a lavish meal.

A still life that is so analytical and so realistically defined by the contrasting light and deep shadow, is evidently inspired, both in terms of style and culture, by the great new theme of still life as conceived and painted by Caravaggio.