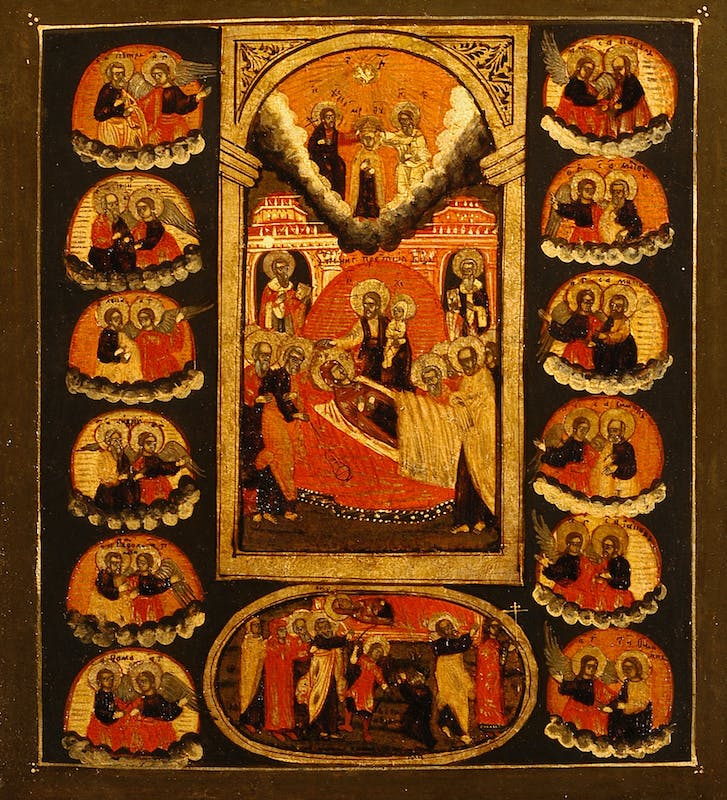 Mary is shown at the centre of the composition lying on her funeral bed with the apostles weeping. The Virgin's soul is shown as a little girl in swaddling clothes in the Redeemer's arms. Two bishops complete the scene, perhaps Dionysius the Areopagite, who certain texts describe as having been present at Mary's Dormition, and James of Jerusalem. At the top the Virgin has risen to Heaven and is being crowned queen of the Trinity formed by God the Father, Jesus Christ and the Holy Spirit in the form of a dove. The lower medallion tells the story of the Jephonia miracle, the man who touched the stretcher transporting Mary's body mockingly and was punished by having his hands cut off by Michael the Archangel.

The twelve medallions alongside the icon depict the twelve apostles on clouds accompanied by angels. This echoes the tradition of the apocryphal gospels, according to which the apostles scattered all around the world were miraculously transported back to Jerusalem to pay their last respects to Mary.

In its treatment of the transporting of Mary's coffin and the apostles in clouds in parallel rows, it has affinities with the Dormition of the Virgin iconography which developed at Yaroslavl in the 17th century. The layout of the figurative space echoes certain Ukraine book frontispieces, like the Lviv Gospels dating back to 1636.

There are affinities between the frames around the scenes with the Uffizi collection icons with their complex design and the dark lines used in their decorative elements. The icon would seem, however, to have no stylistic affinities with any of the other Florentine icons.