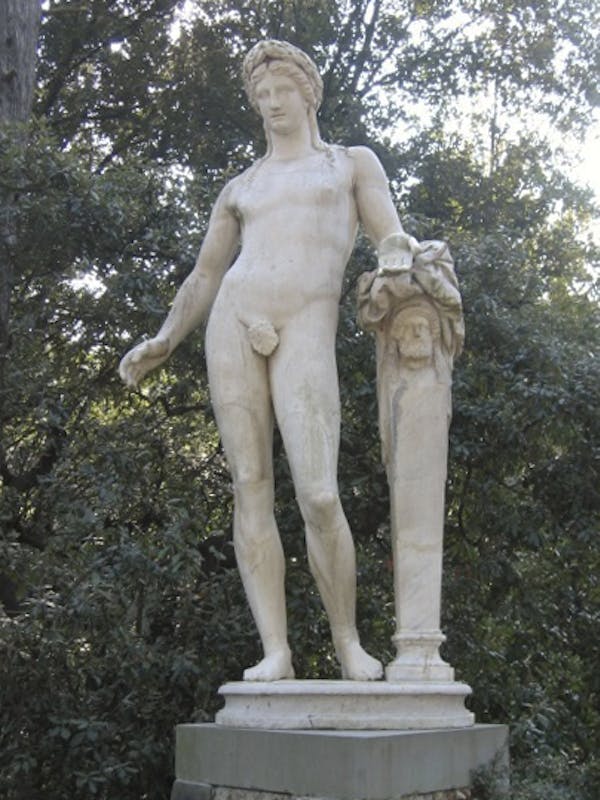 The young god leans against a herma with his left arm bent, thus accentuating the sinuous movement of his body. His slender, youthful, muscular torso accompanies the languid movement of the figure resting on his right leg, while his left leg, slightly bent, appears to suggest a chasm that may also originally have been taken up by the position of the arms. The arms are the result of a modern integration which has certainly been accurate in depicting the left arm bent with its elbow on the herma. The right arm too, stretched along the body, proposes the position of the limbs characteristic of ancient times. The head, definitely modern, has been added without leaving any clues about its original location. The modern sculptor has opted to slightly turn the head down to the left, which may not coincide with the solution adopted in ancient times. Likewise, the original ends of the locks of hair on the chest and shoulders provide no reliable elements on which to base assumptions about the correct location of the head. The herma is surmounted by a cloak doubled up so as to form a sort of pillow on which the god is leaning. Thiswas already part of the original statue, as demonstrated by the lower fragment joined to the ancient base of the sculpture. The pertinence of the herma to the standing figure provides a key element for correctly placing the sculpture in terms of time. In fact, although figures of Dionysus with this type of body, according to a Praxiteles-inspired style, are found relatively frequently in the classical statues of the Roman period, the association of these figures with the herma, a probable allusion to Dionysus’ relationship with Hermes during his childhood, is much less common. A precise parallel to the rendering of the pillar and to the description of the drapery over it is offered by a headless statue preserved in Villa Pogliaghi, in Varese, thought to have come from the collections of Villa Borghese. The lack of the head in the Varese replica prevents us from confirming any theories on its original placement, but a clue that points to its head being rotated towards the left, at the top, is offered by a third replica, now in the Prado Museum. The three marble statues have homogeneous characteristics and so appear to constitute a veritable sub-type (conventionally defined as "Madrid-Varese") of the wider "Richelieu" type. The archetype is believed to date back to the end of the fourth century BC. Schröder has recently put forward a theory that places the Richelieu model in the artistic culture of the late second century BC, based on the type of herma adopted in the replicas of Varese and Boboli, which can be traced back to a well-known late Hellenistic type. The statues of Madrid, Varese and Florence should therefore be considered the closest to a model with its own herma, a less commonplace combination than that featuring the trunk of a vine found in the Richelieu type replicas. The almost total loss of the original surface and the extreme smoothness of the modelling offer no definite clues as to the period of the piece: the only clue present is the technique used for the beard of the herma, accurately defined and only slightly in relief, which appears to recall solutions similar to those found in portraits of the Hadrianic period. The head, thought to have been added as early as in the sixteenth century, reinterprets the Lycean Apollo types, mediated through eclectic models adopted between the Hadrianic and Antonine periods for the iconography of the Apollo Citharede. The statue was housed in the Gallery of Villa Medici in Rome for a long period. The work, added by Luigi Lanzi to the list of those to be transferred to Florence drawn up in 1787, arrived there the following year, but may only have been placed in Boboli at the end of the 18th century.